Cruise the Thames on a boat to discover a world of cosy pubs, ancient towns and misty mornings.

Want to see a different side of the UK?  Book an affordable boat cruise on the River Thames like Sam Basch did, and experience rural waterways and old towns. 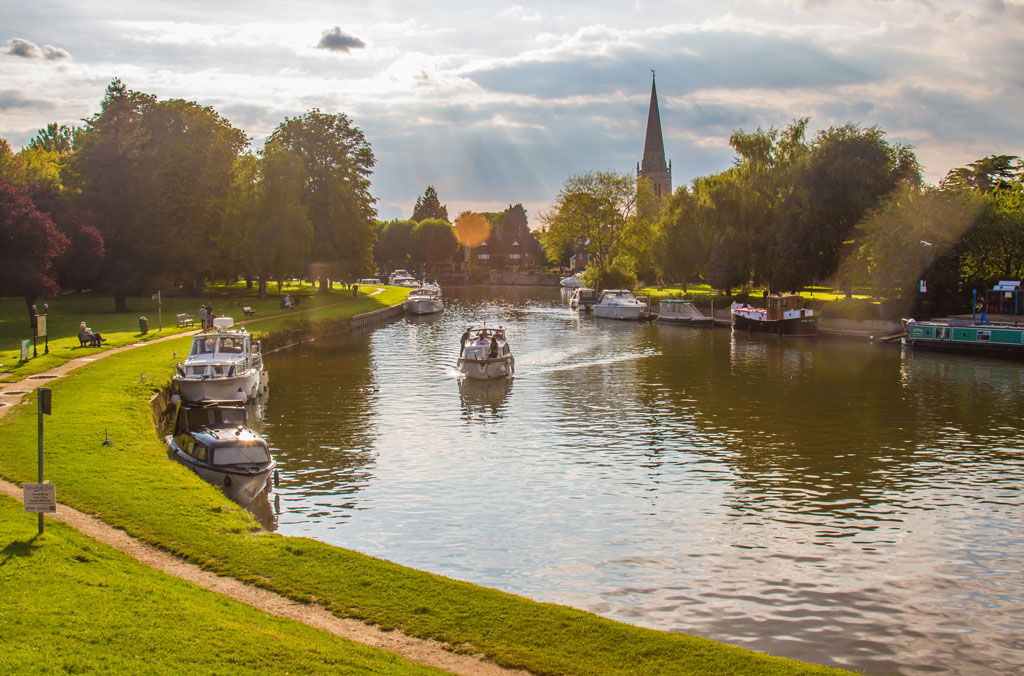 Not many tourists are aware that ancient waterways still wind through parts of the UK, dating from an era before proper roads were built.  My wife Anna and I recently visited our son Alwyn, who lives in England.  We wanted to do a fun but affordable activity with him and his British girlfriend Lisa, so we booked a four-day boat cruise on the Thames and its canals.  You pilot the boat yourself and also sleep on board.  One makes slow progress – like cycling or walking – which allows you to experience so much more of the countryside.

At the town of Benson, west of London, we stepped aboard our vessel after a brief training session.  We were taught how to safely navigate on the river, to moor the boat, how to “turn on a sixpence”, and how to operate the engines, electrical system and the fresh water supply.  It sounds much more complicated than it turned out to be.

The plan was to travel up to the university town of Oxford and back – about 35 km on the water.  At the first bend in the river, we steered towards the bank to practise mooring the boat.

We did so many times during the journey and in due course even learnt to parallel ‘park’ alongside other boats.

Gaining confidence as we slowly navigated upstream at five miles per hour, we mellowed as softening light painted the sky above the placid waters.  We reached the first lock just before the keeper went off duty and he let us through. 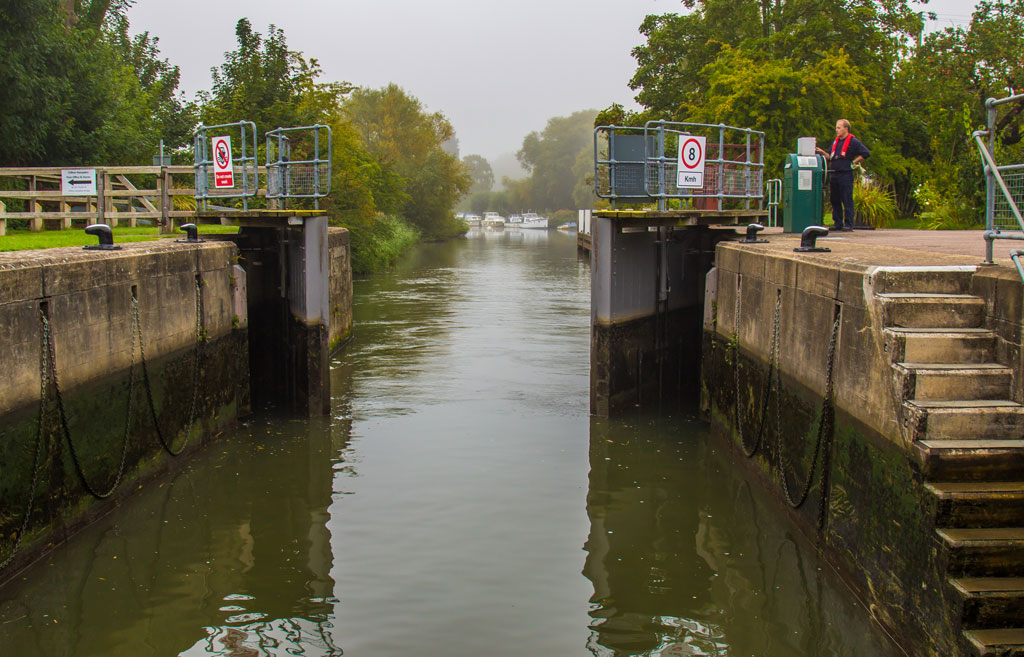 (A lock is a device to raise or lower a boat to navigate on stretches of water of different levels on a river).

Upstream of the lock we found a good overnight mooring spot next to a World War II gun emplacement, known as a ‘pillbox’, below a massive Iron Age hill-fort. 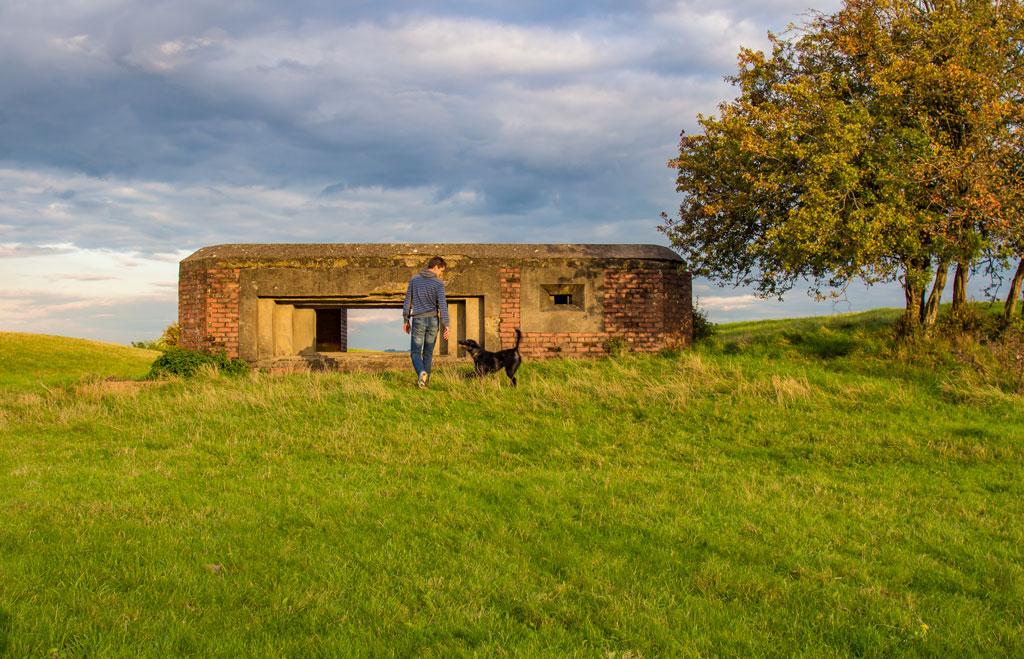 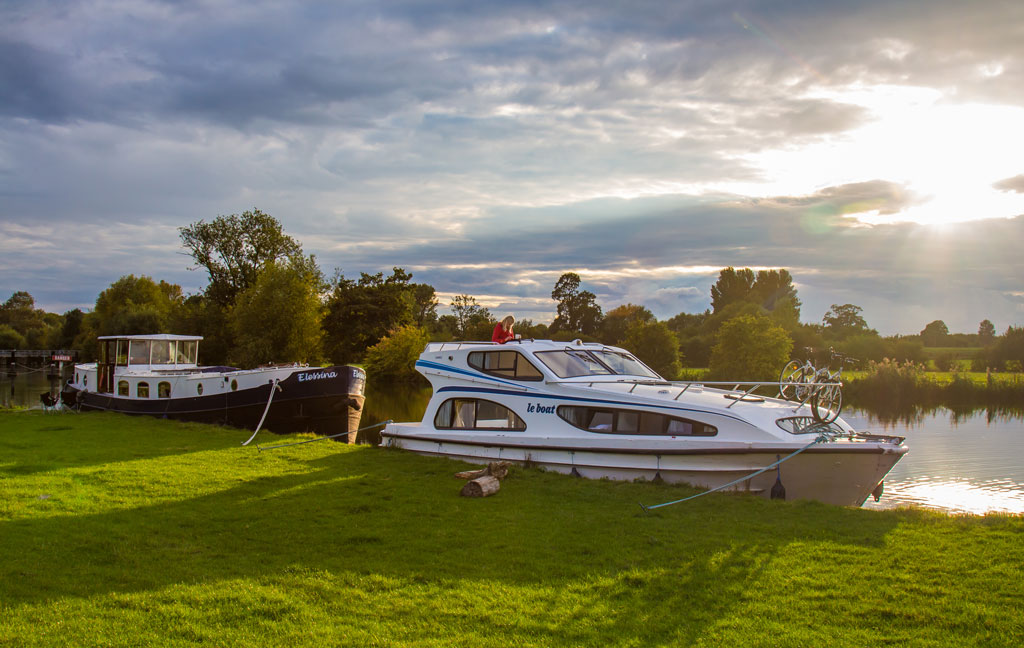 Our 39-foot (about 12 m) ‘Caprice’ sleeps two couples in a pair of spacious cabins, each with a toilet and a shower.  Couches in the saloon can be converted into single beds but are rather more suitable for children.

The boat’s galley is equipped with a fridge, stove and microwave, cooking utensils, crockery and cutlery, and running water.  In the comfortable saloon is a sundeck and a tiny wheelhouse.  Thanks to great weather during our trip, Alwyn and Lisa, our designated skippers, preferred to use the secondary wheel on the top deck. 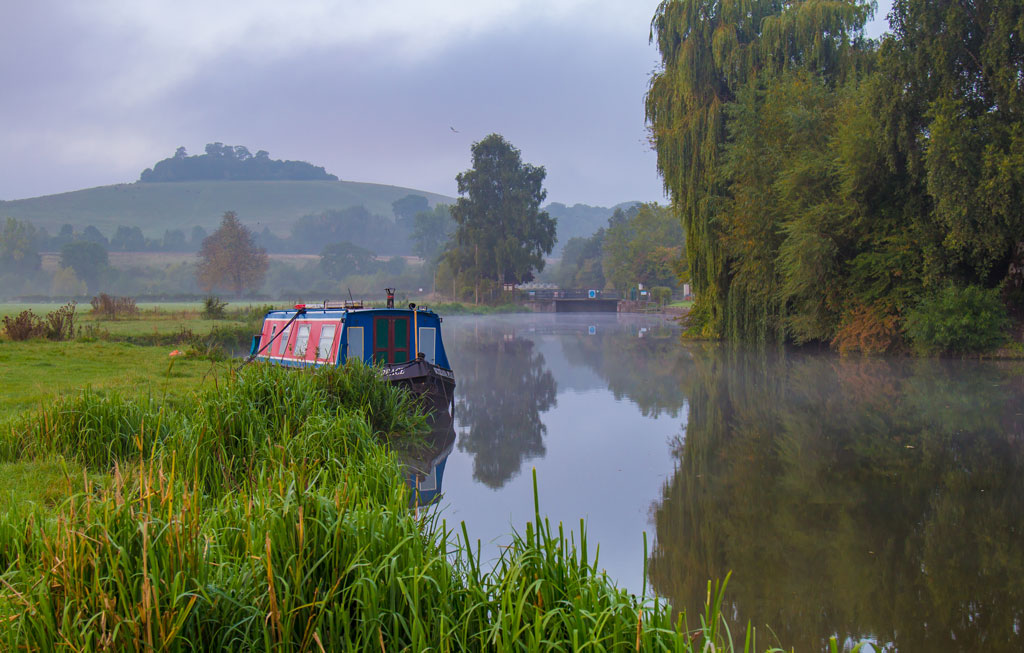 Before sunrise we headed upstream, enveloped in thick fog.  Boats moored among the dark trees on the bank created a spooky fairy-tale landscape. 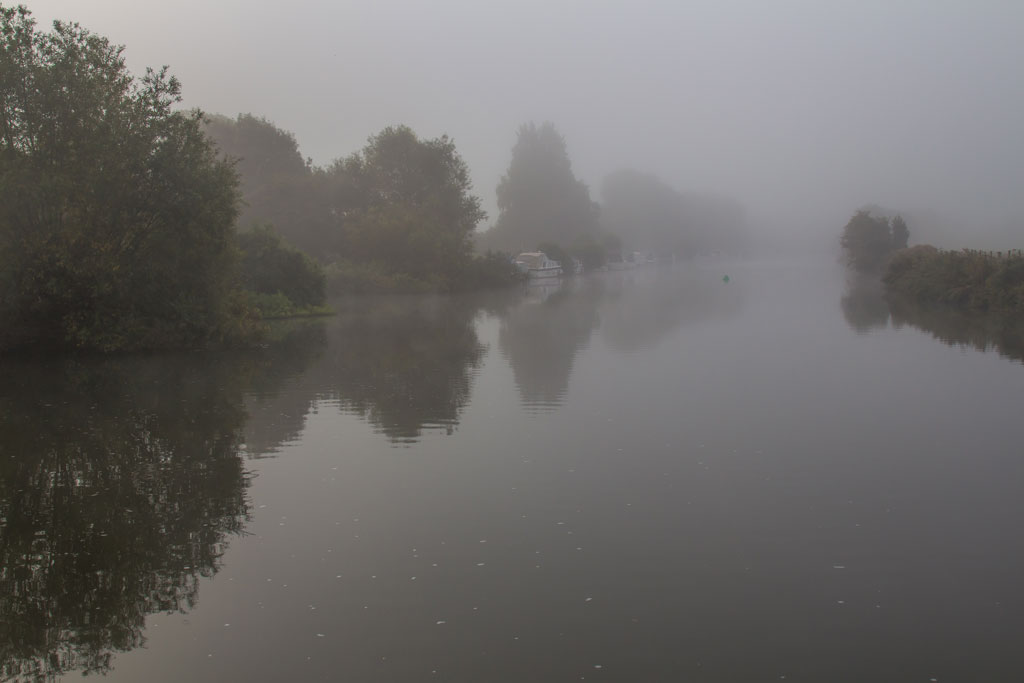 As Clifton Lock emerged from the fog, something didn’t look right – the lock doors stood half open!  Nothing we tried could make them close or open all the way. 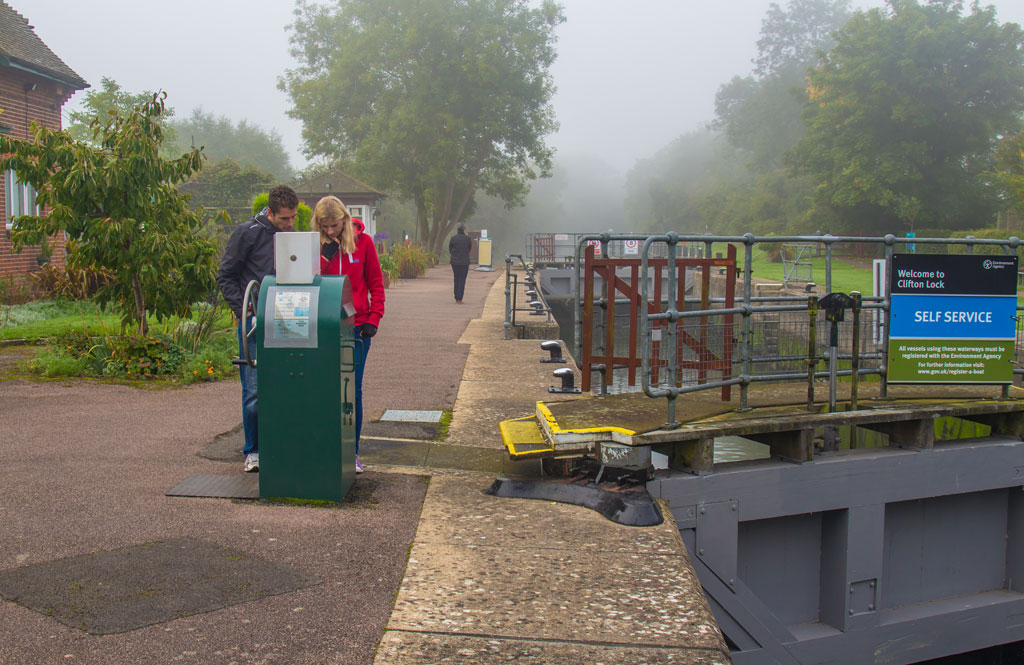 It was just before 7 am and the lock keeper was probably not due until 9 am.  So, we opted for breakfast on board, using the ingredients we’d bought at a Tesco in Reading:  traditional Cumberland pork sausages, eggs, cheese, tea, and toast with strawberry jam.

Eventually a technician managed to repair the hydraulics and we could finally head out further, leading a flotilla of boats that had dammed up behind us. 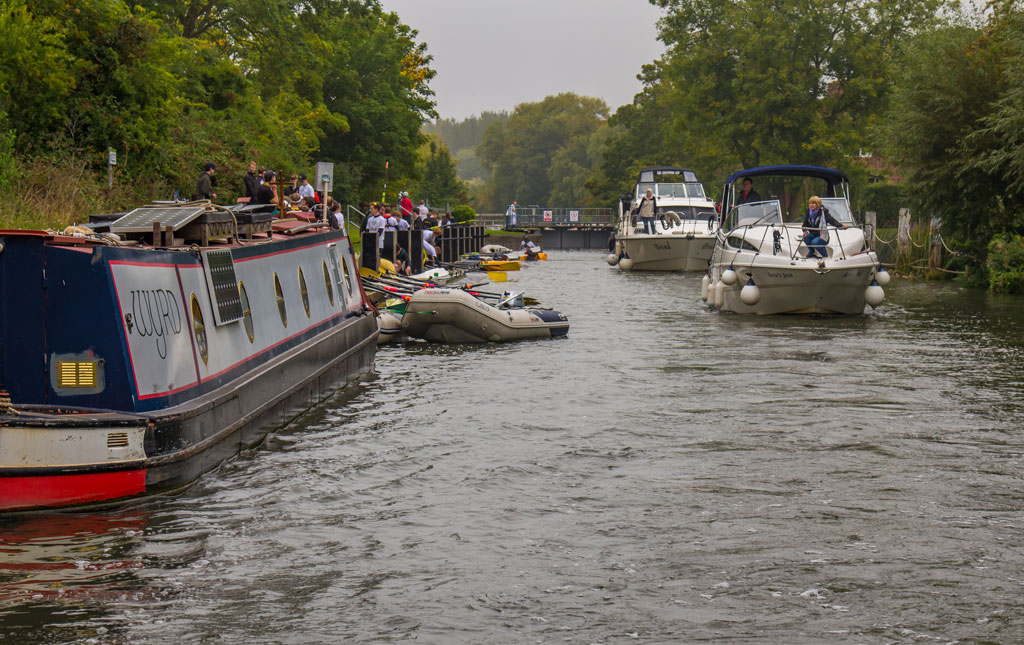 Two hours lost, but no one was complaining.  The fog had burnt off and it was a lovely sunny day. 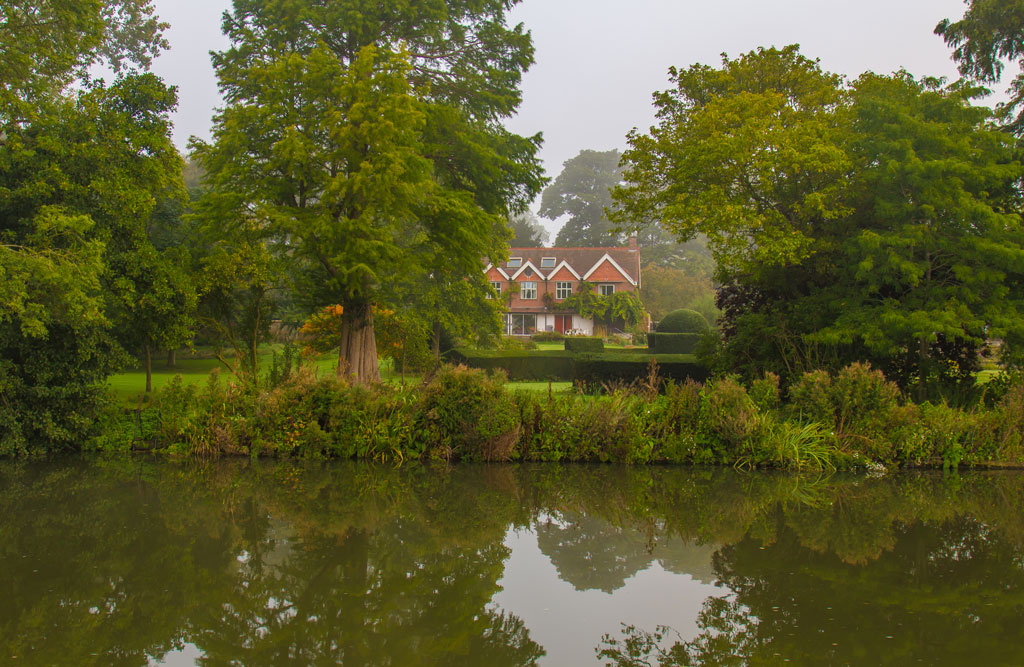 Caprice glided underneath ancient bridges, past farms, historical hamlets – each with a quaint stone parish church, and homesteads from the pages of House & Garden.  Every so often we saw a hopeful fisherman on the verge. 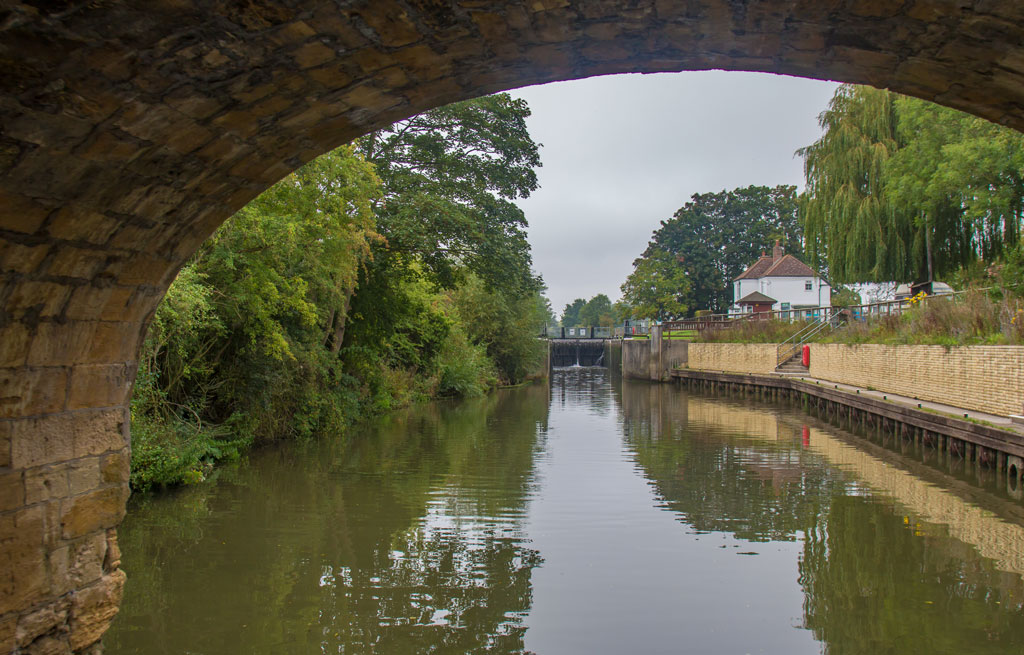 Passing the villages of Appleford, Sutton Courtenay and Culham, we arrived in Abingdon-on-Thames, where we moor alongside a park downstream of the Nag’s Head Restaurant, built in 1686.  On the opposite side towered St Helen’s church, the site which has been a place of worship since the year 995.  Abingdon-on-Thames claims to be oldest town in England. 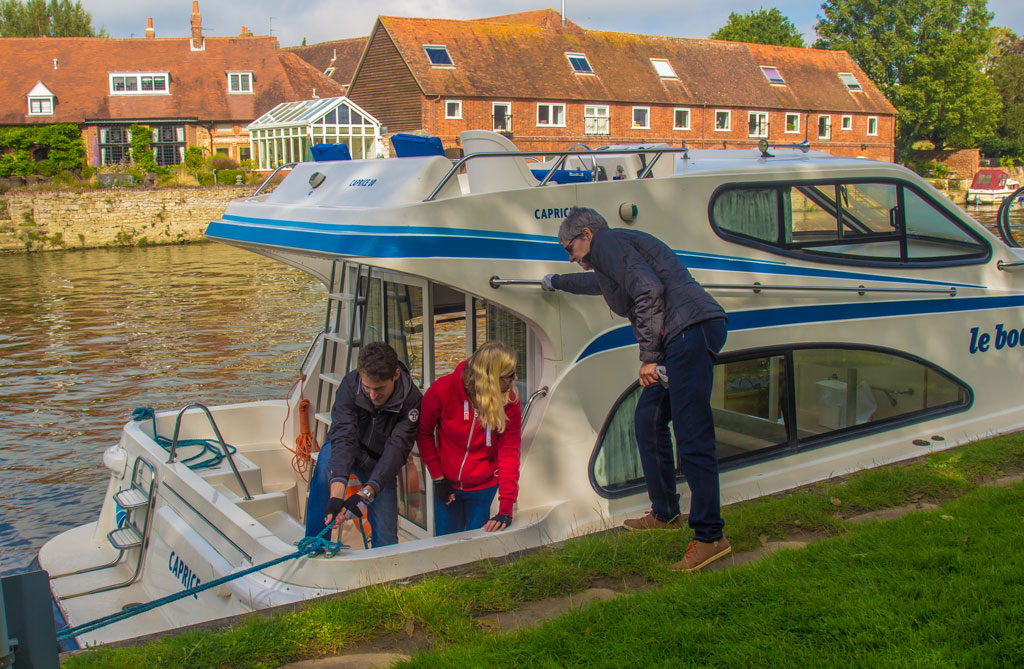 Tying up at Abingdon-on-Thames 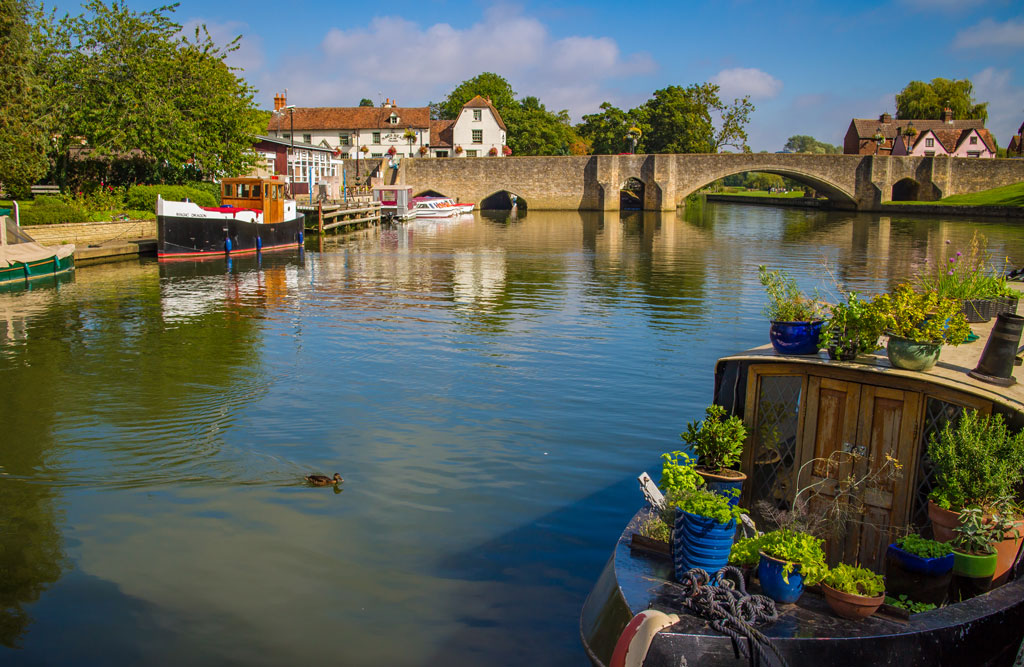 Abingdon Bridge with the Nag’s Head on the left 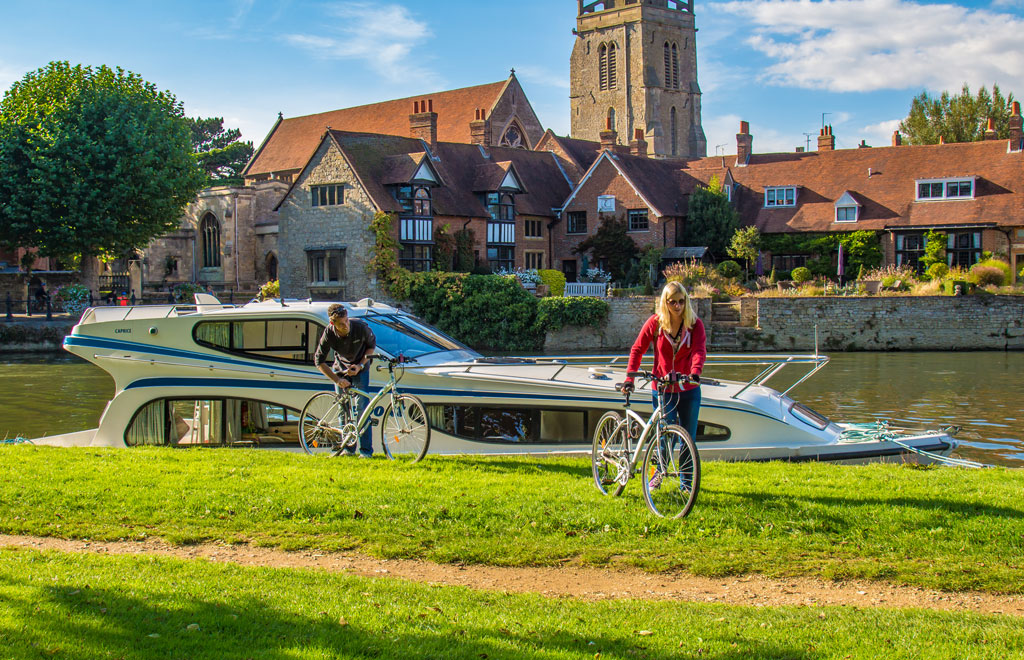 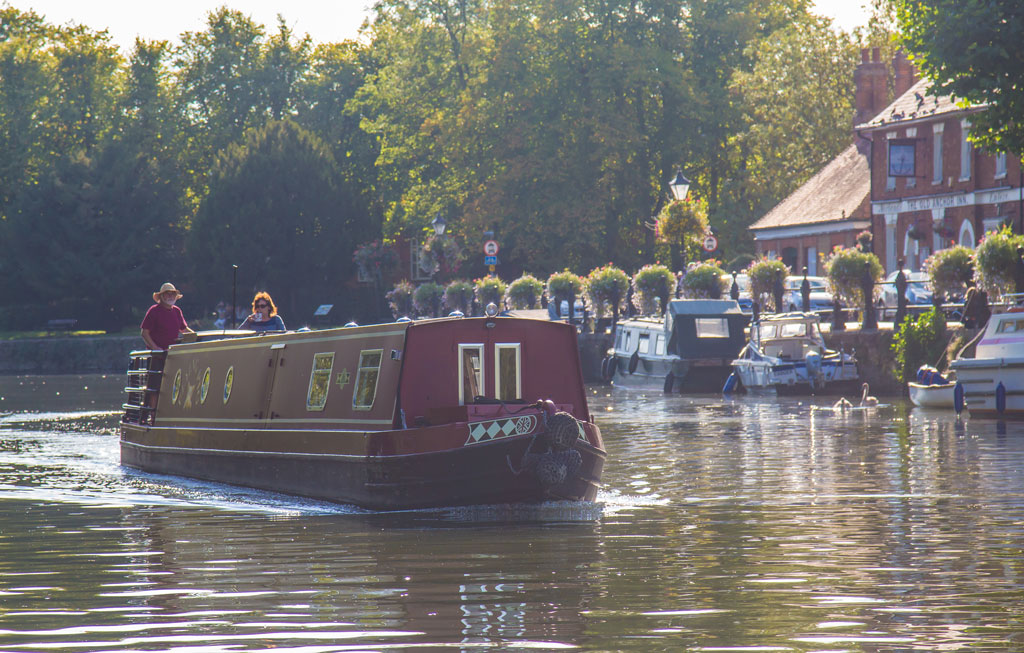 Indeed, the little town literally brimmed with history.  We got a peek inside Abingdon Abbey’s ‘Long Gallery’, dating from 1455, where a wedding was to take place later that day – the guests to be treated on real British ‘fish & chips’.  Nearby is a school established by John Roysse in 1563.  What about having a pint at The Old Anchor Inn, built in 1884 – not so old after all! 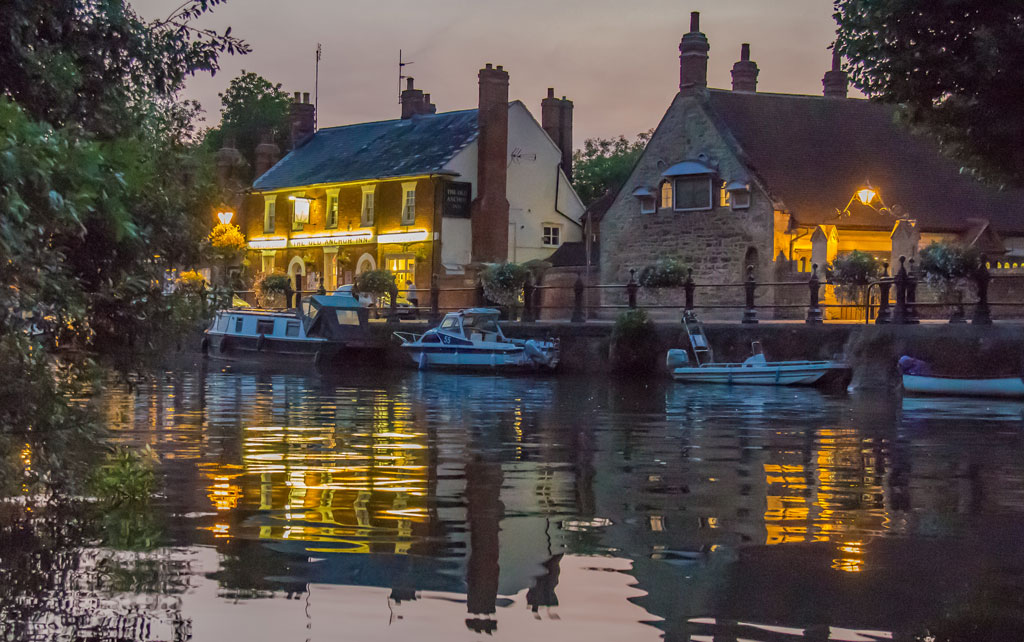 Lost time has overtaken us.  We realise there would not be enough time to cruise all the way to Oxford and back.  So, we turned the boat around. As on the previous day, we cast off in oppressive fog. 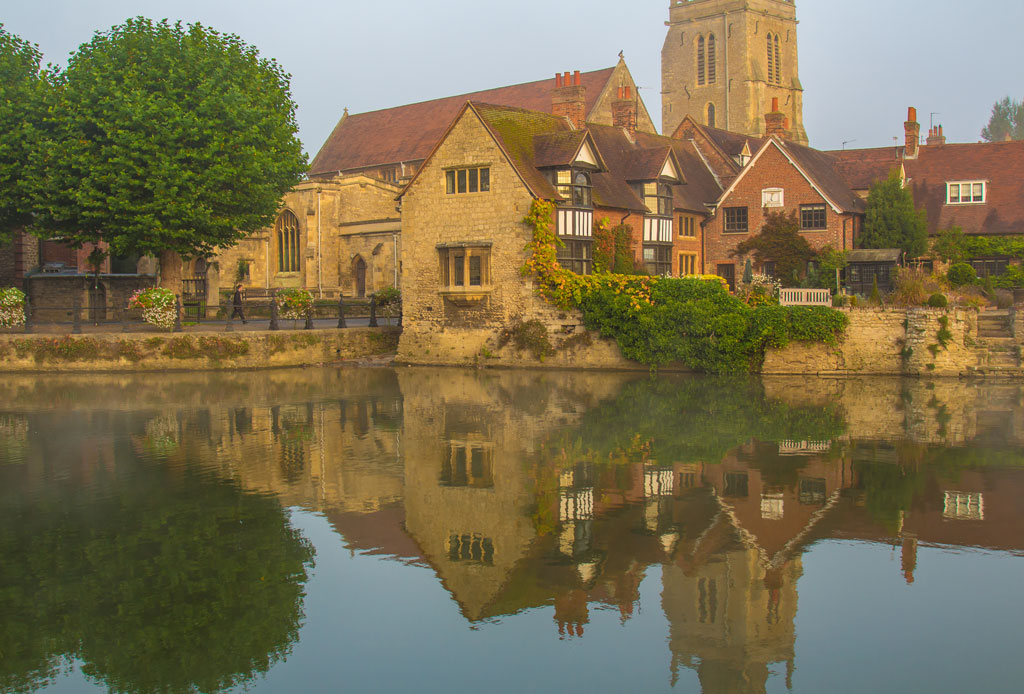 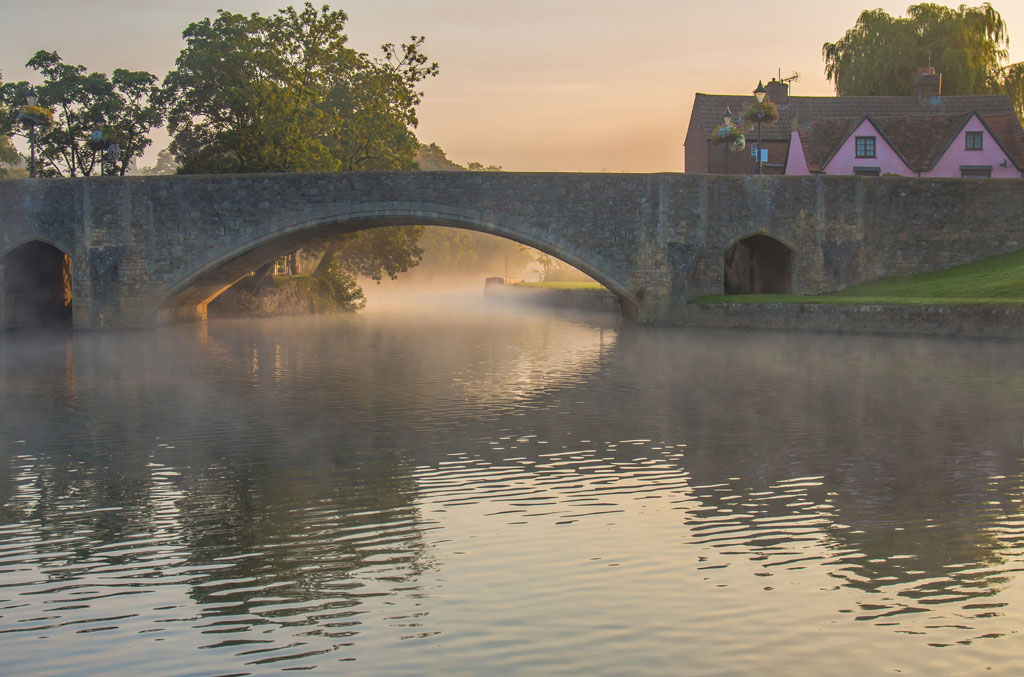 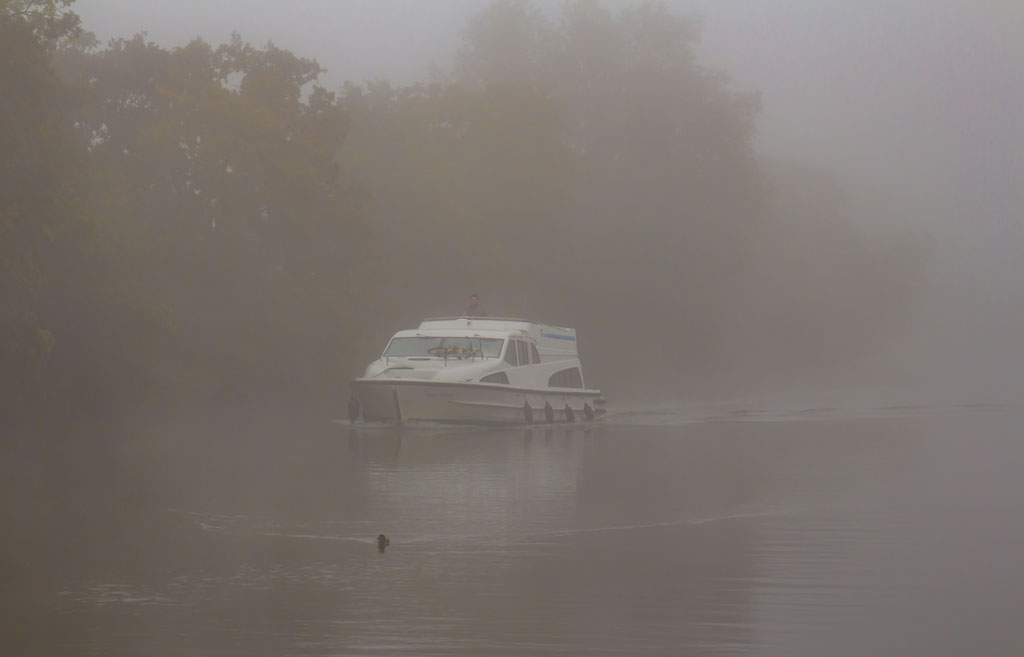 Impenetrable fog on the river 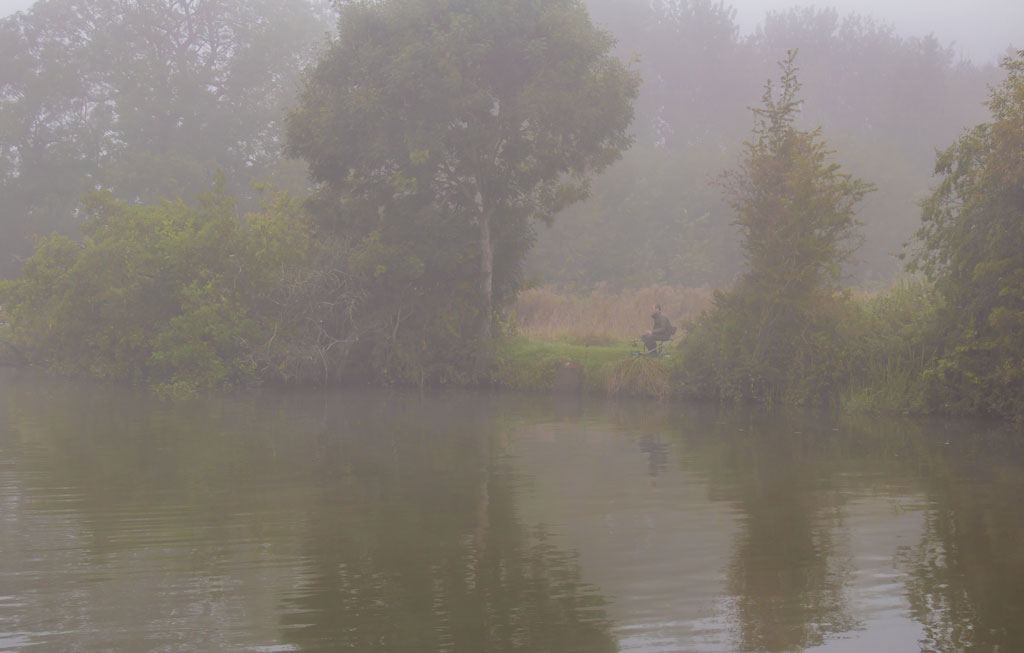 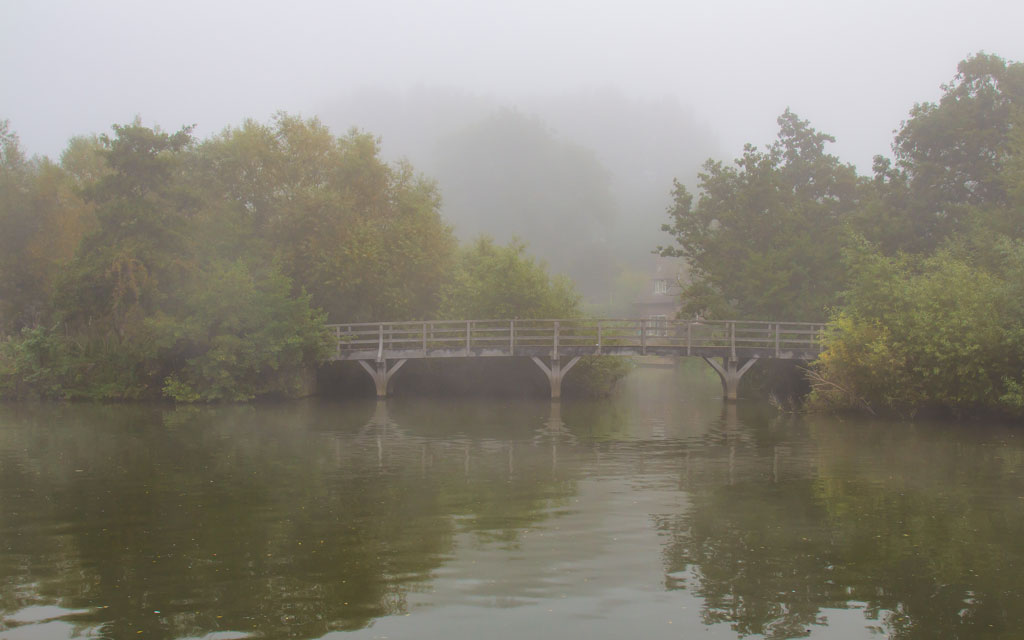 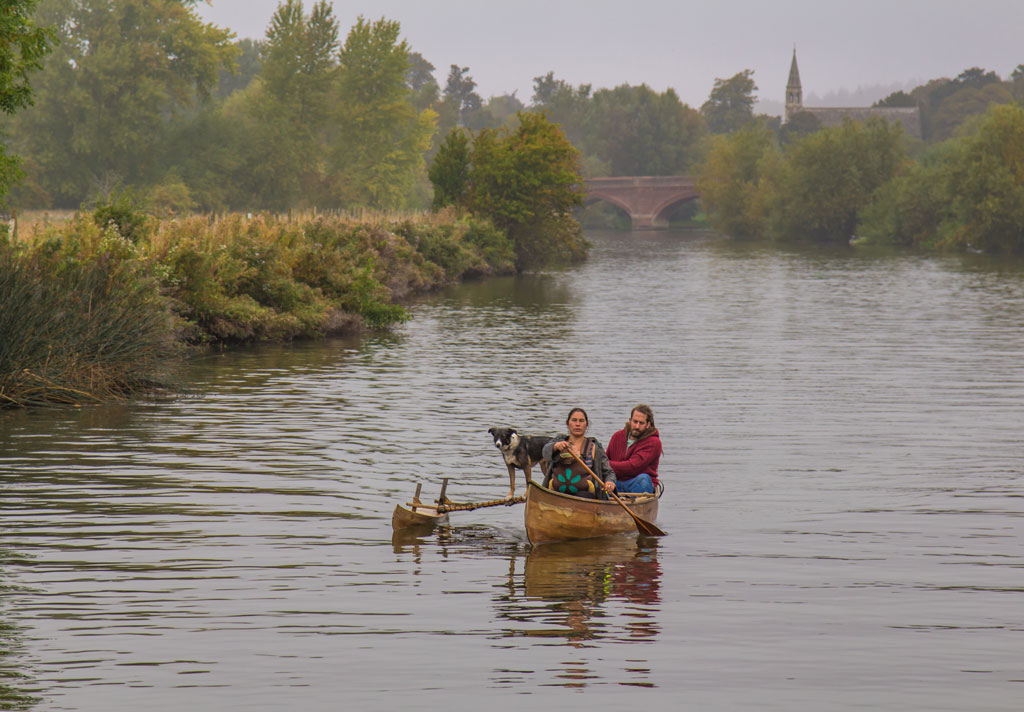 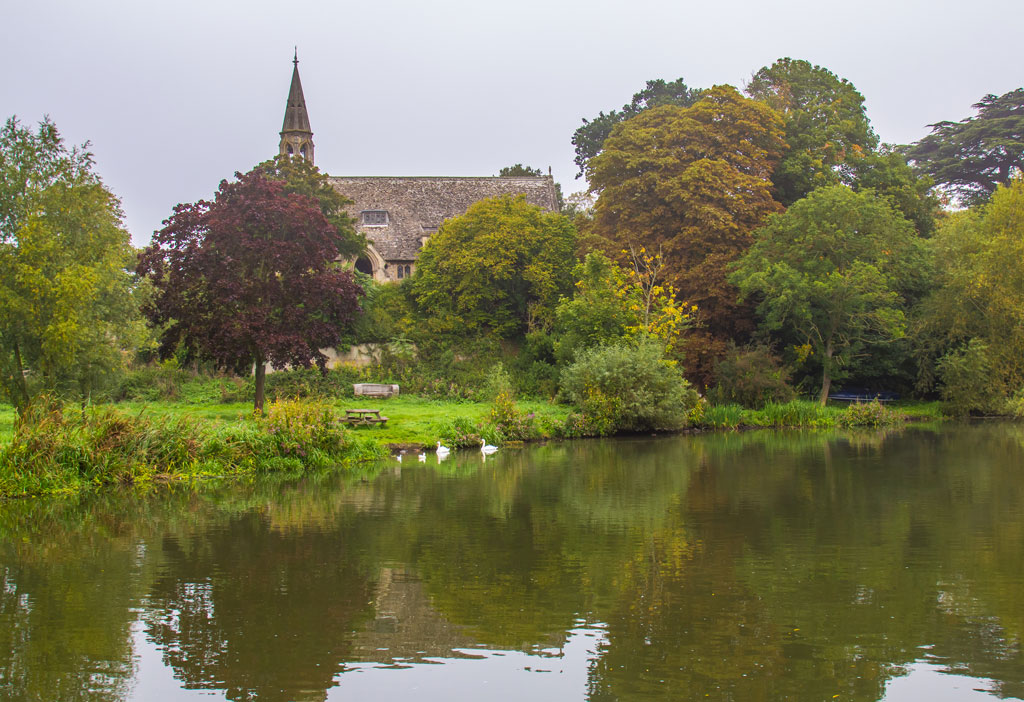 An hour later we moored the boat under a bridge at Clifton Hampden in bright sunshine, and I get given a pink cupcake to celebrate my birthday.  Then we headed for The Barley Mow tavern built in 1352 – exactly 600 years before I was born. 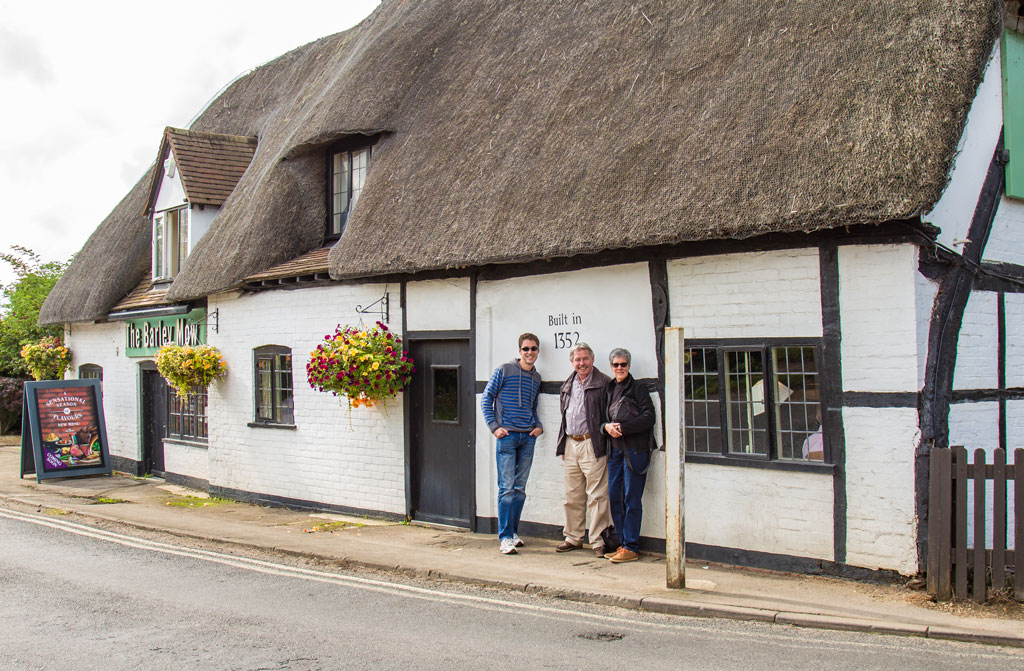 Jerome K. Jerome writes about this very tavern in his book Three Men in a Boat:  “…without exception, the quaintest, most old-world inn up the river on the right of the bridge, quite away from the village.  Its low-pitched gables and thatched roof and latticed windows give it quite a story-book appearance, while inside it is even still more once-upon-a-timeyfied…” 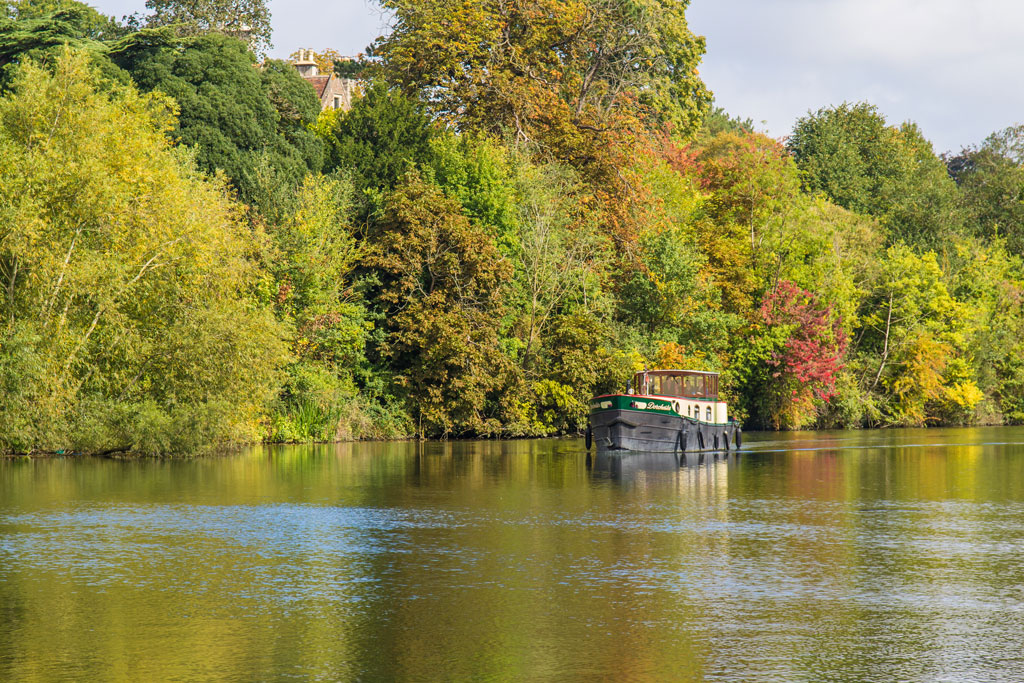 We passed some of the most beautiful river barges converted into floating homes, plus elegant houses on the banks, old bridges and the enchanting hotel at Shillingford.  Finally Caprice brought us to Wallingford, home of crime novelist Agatha Christie.

This town was one the last strongholds of the forces loyal to King Charles I during the English Civil War in the 1600s.  Wallingford Castle had been a royal residence until 1349, when there was an outbreak of the Black Death in the town.  Oliver Cromwell’s troops slighted the castle in 1652.  Its stone materials were later removed to repair Windsor Castle. 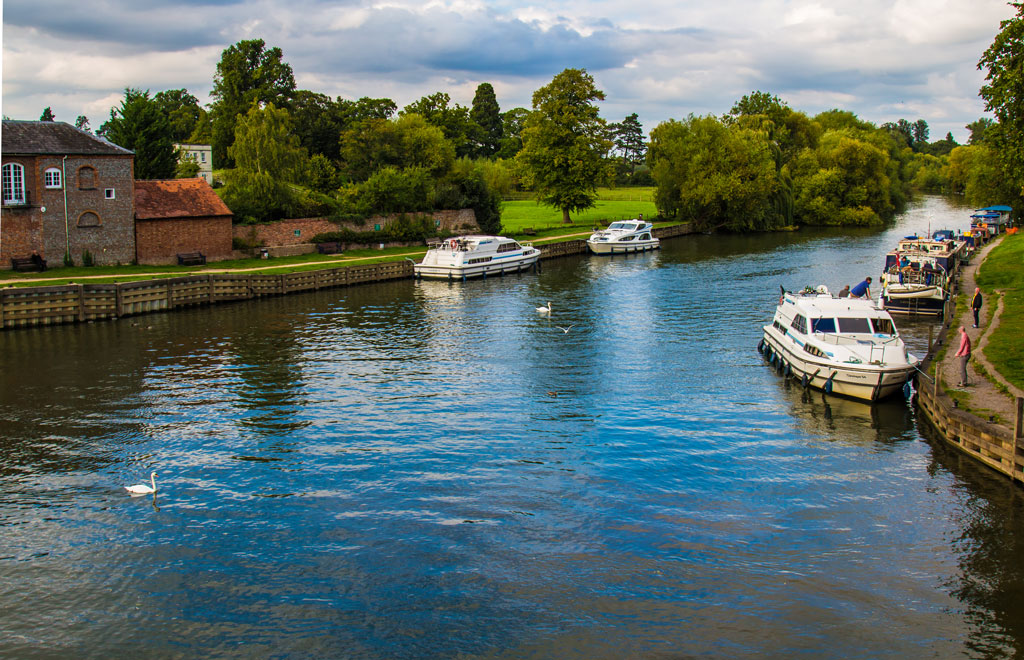 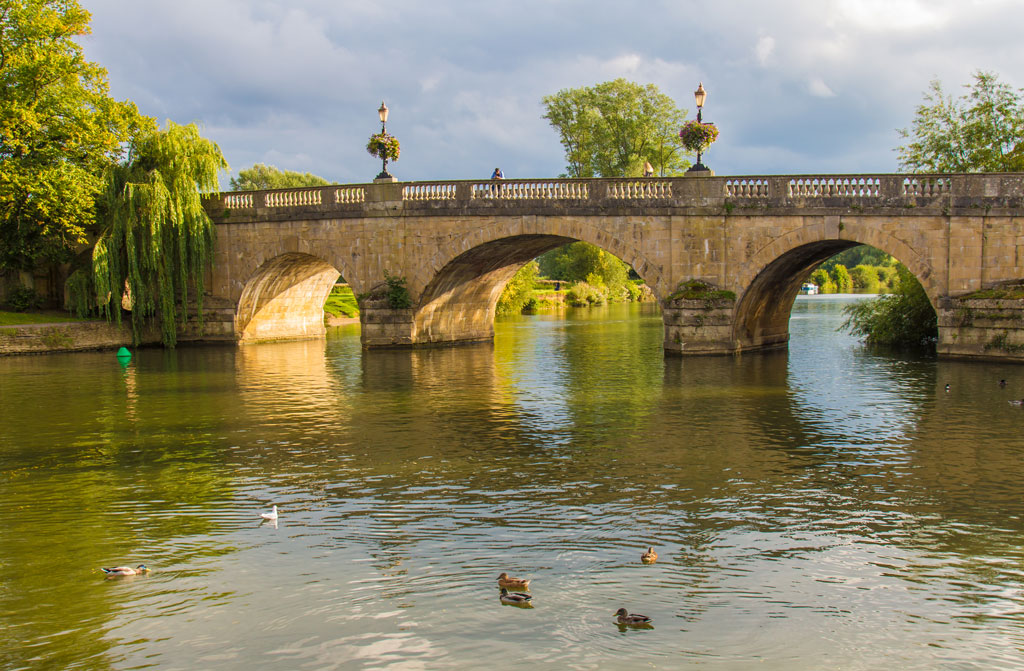 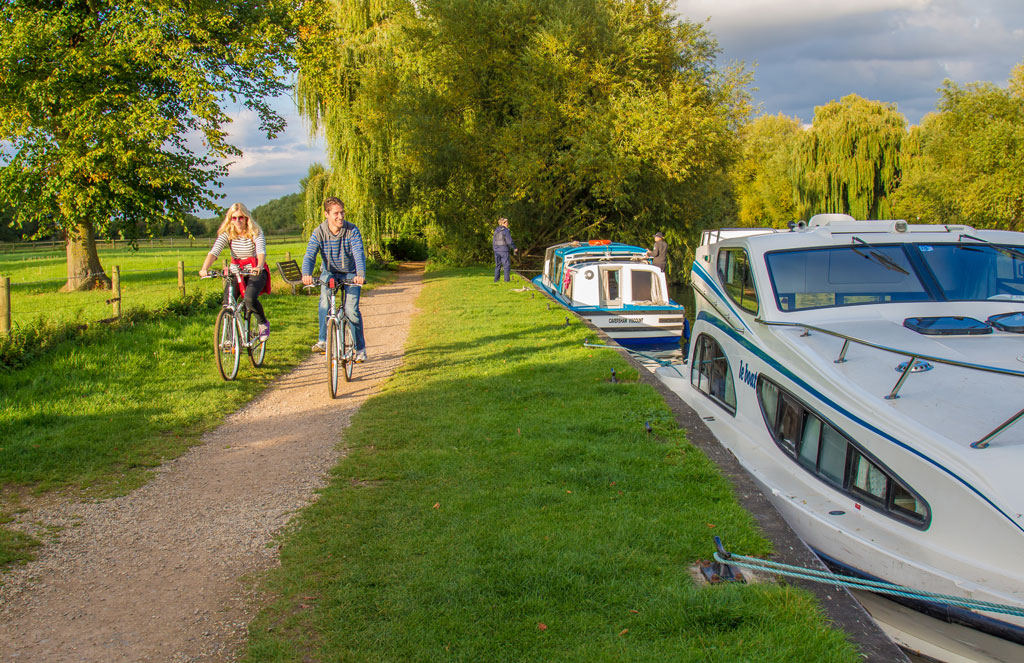 We strolled through the narrow streets, bought sweets at Mr Simms Olde Sweet Shoppe, admired The Old Post Office coffee shop and visited the George Hotel where notorious highwayman Dick Turpin jumped through a window in the 1700s to escape on his horse Black Bess. 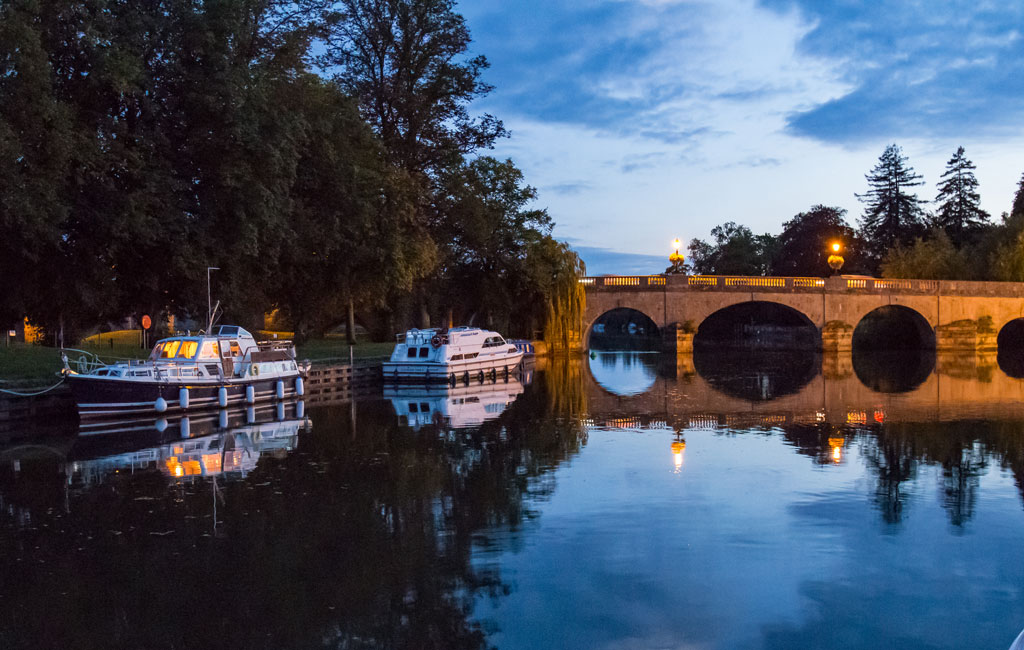 Caprice had to be returned to base at Benson by 9 am.  For three sunny days she’d enabled us to explore the Oxfordshire area in comfort.  But this is England and the rain clouds brought a slight drizzle… 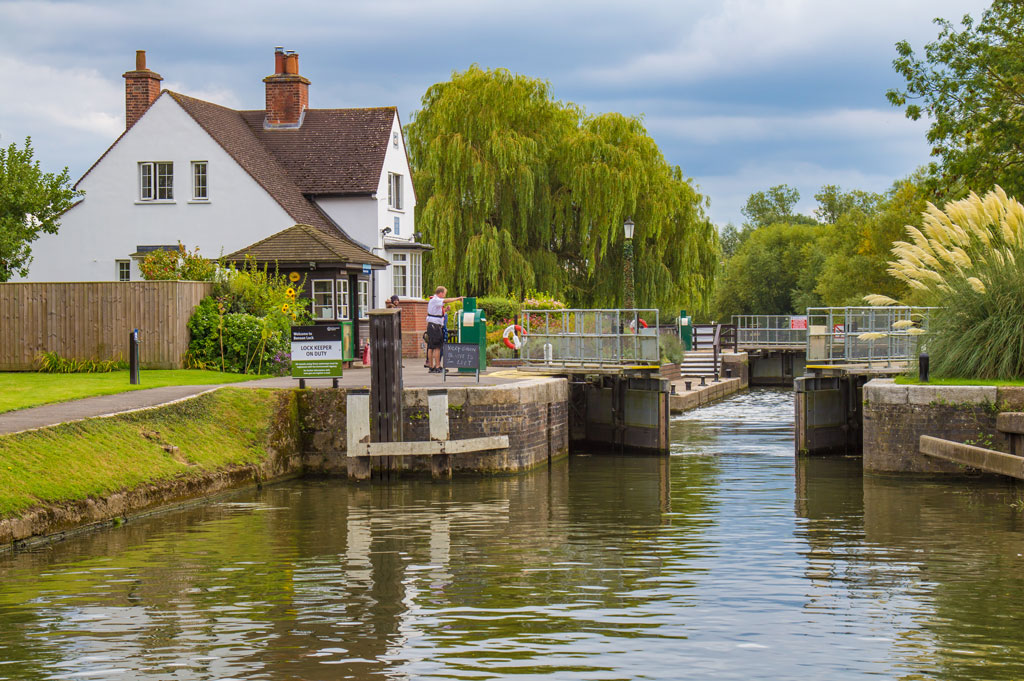 Alwyn reversed the boat up to the jetty, skilfully parking it alongside the other boats.  We paid for the small amount of fuel used and caught a taxi back to Reading.  I already miss life on the river.

Know before you go:

How does it work?  We booked through Le Boat, a company that offers canal boat hire throughout the UK and Europe (www.leboat.co.za).  Packages range from 3 – 21 days on boats of various sizes.  One doesn’t need prior experience or a licence.

The UK has an excellent rail network, which we used to get around when we weren’t on the water.  For tickets, visit www.railcard.co.uk; thetrainline.com; mytrainticket.co.uk

Cost:  From R750 per person per day (depending on the season), plus a deposit on your credit card for fuel and insurance.  Fuel cost us only £25 (R550) for four days.  One can buy food in towns along the way.  We found the prices roughly the same as in South African supermarkets.

Eating out at restaurants will drive up costs – a rump steak at Nag’s Head in Abingdon will set you back about R450.  South Africans need a visa to visit the UK – about R1,650 per person.

[This is a redacted article, first published as a reader contribution in English and Afrikaans in the January 2016 edition of the Go! and Weg! travel magazines respectively, and online on 13 and 27 March 2017 in Afrikaans and English respectively]