Gold-digging has such a nice ring to it.  One can almost hear the clanging of hammers as claims are pegged and thudding pickaxes bite into the rust-red soil.  Above the acacias hang clouds of dust and the droning voices of a myriad ‘uitlanders’ (foreigners) intermingling with those of local Shangaan.

I was keen to revisit this scene of over 100 years ago at Leydsdorp in present-day Limpopo province.

Of course, we knew the goldrush had petered out long ago, but the GPS dutifully displayed a perfect grid of the town.  If it were to be believed, I could turn down any of its streets:  Biccard, Zuid, Buiten, Dewitthammer, Selati, Ashton – except there was only dense thornbush all around.

Langmarkt Street was the only passable track, taking me towards some buildings and a forlorn sign Leydsdorp Boerevereniging (‘farmers’ association’). 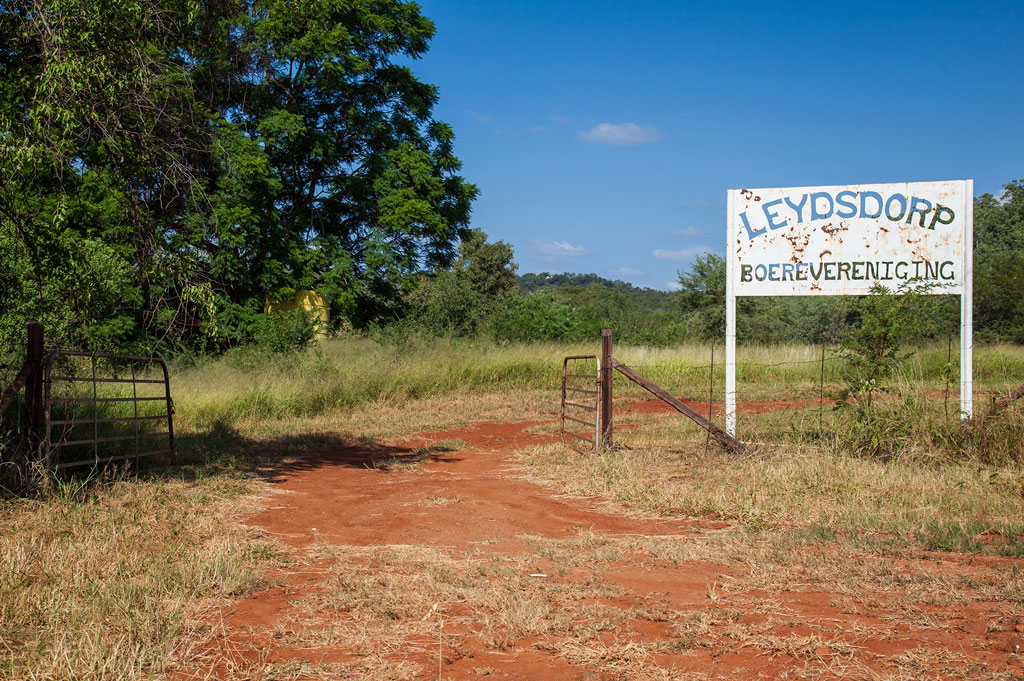 A wonderful surprise this turned out to be.  Despairing at the inexorable decline of Leydsdorp over the years, some local entrepreneurs decided to invest in restoring the hotel and lodge.  When we arrived, they were days from reopening, with the hope of once again attracting tourists.

Reviving Leydsdorp to its former glory was asking a lot, but perhaps worth a try. 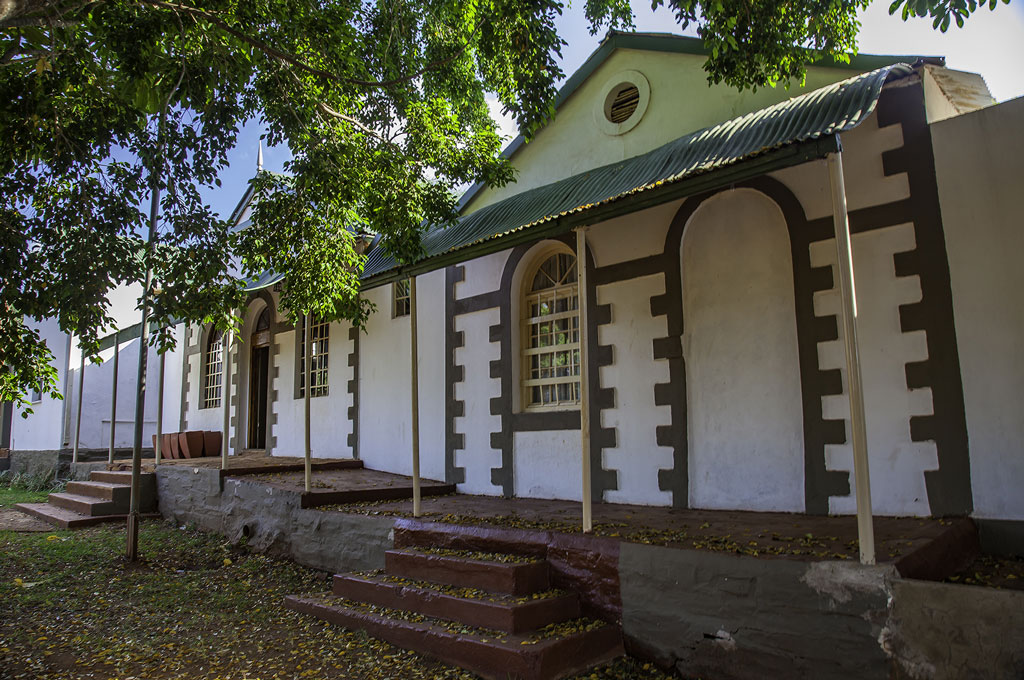 In its heyday Leydsdorp had about 3 000 inhabitants, attracted by gold discovered in the Murchison Mountains.  Digging in ferocious heat and cloying dust tends to parch the throat.  Small wonder the town boasted no less than eight bars, not to mention other pleasurable amenities invariably part of those rough goldrush towns.

A frequent visitor was Transvaal President Paul Kruger, supposedly to hunt lion, a stuffed specimen of which lurked menacingly in a corner of the lounge.  The President used to lodge in a fair-sized house with wraparound veranda, until recently the Leydsdorp Lodge.  In 1890 he declared Leydsdorp a ‘city’ – as important Zuid-Afrikaansche Republiek state documents could only be signed in a city!

Today’s visitors can overnight in the hotel’s period-decorated en suite rooms.  We imagined formally attired guests coming down for dinner in the spacious hall with original pressed ceiling and Oregon pine floor.  Finish off the meal with a good brandy and cigar as one settles down in the soft glow of an old-fashioned shade lamp suspended above the green baize-covered billiard table.

Behind the counter of the ‘Porter’s Pub’ is a trapdoor leading down to a tiny cellar.  Legend has it the cool space was occasionally used to store a dead body – of which Leydsdorp produced its fair share due to fever and fights – for burial in the morning.  The locals believe a brick wall in the cellar hides a tunnel entrance to a mineshaft at the foot of a nearby koppie.

On the adjoining game farms are remnants of diggings and disused shafts that could soon be opened to tourists. 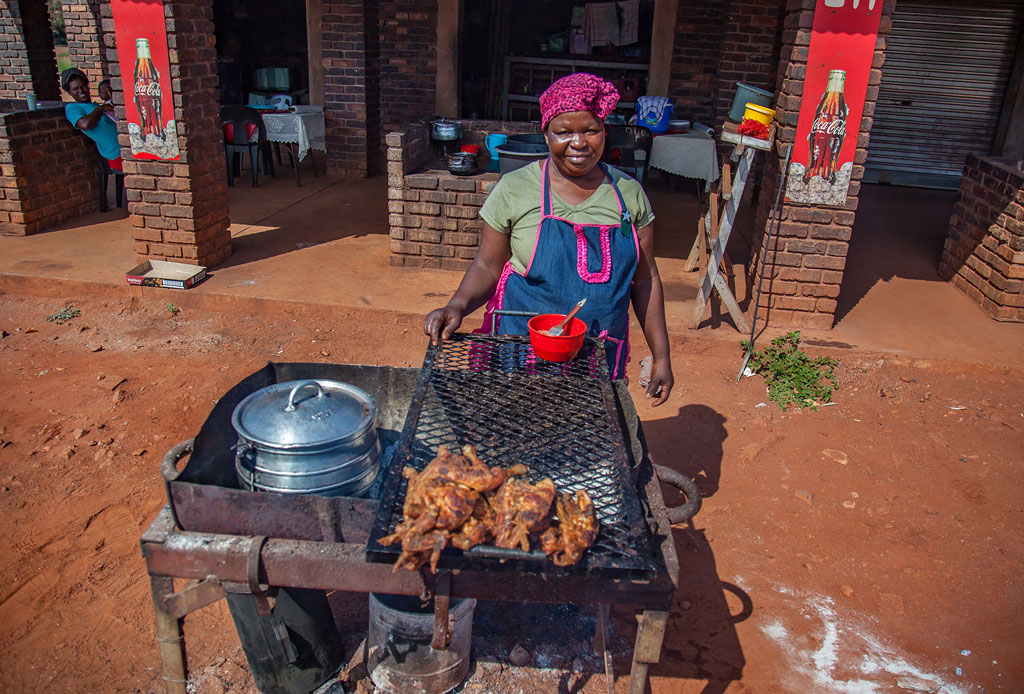 Admittedly more attractions are needed to lure visitors to Leydsdorp.  Just outside town, on the dirt road to Gravelotte, is a giant baobab, supposedly able to accommodate “a dozen thirsty gold-seekers at a time” in a bar built inside the hollow trunk, as described by David Hilton-Barber in his ‘Footprints’ series on the Lowveld.  Like many tall gold-digger tales, this number is probably exaggerated.

However, tourist brochures mentioned an even bigger baobab near Duiwelskloof with a real bar inside, which has often featured in magazine articles.  It is huge – and probably thousands of years old.  Sadly, shortly after our visit it collapsed due to age or some arborial disease, or as some would have it, climate change. 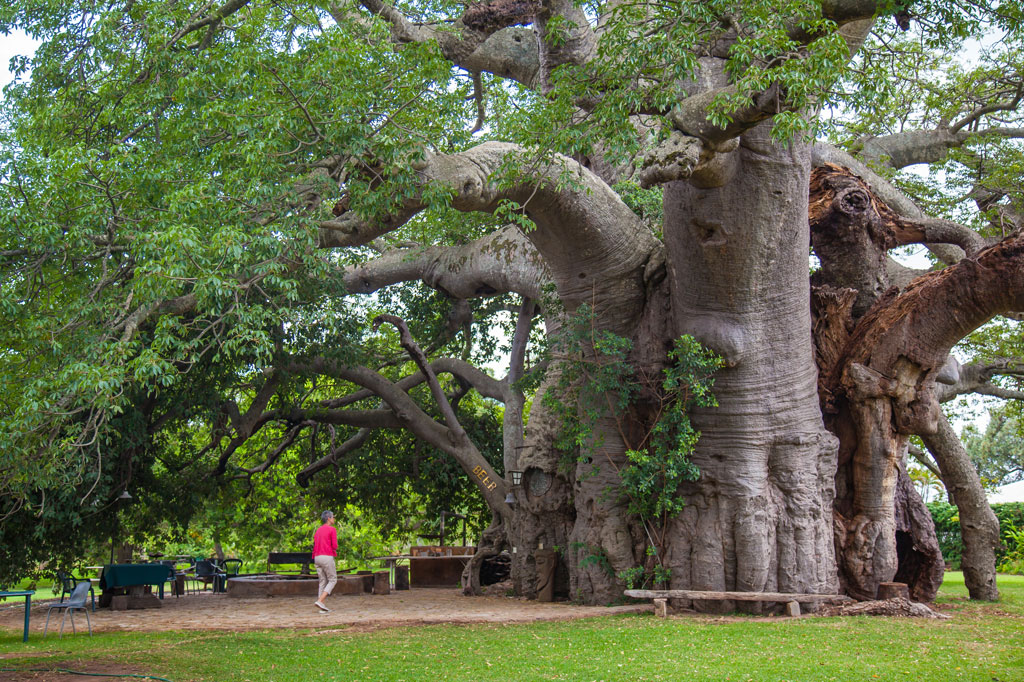 On to Haenertsburg we drove, another cosy town with an interesting bit of mining history.  It is named after a German big-game hunter Carl Ferdinand Haenert who turned to prospecting when gold was discovered in the area. 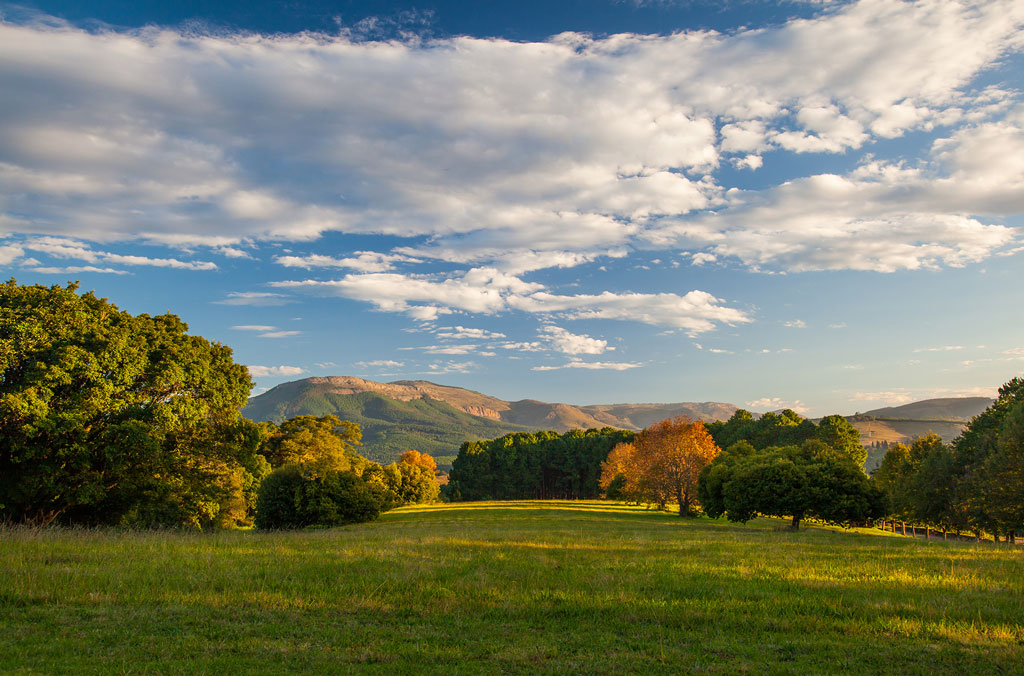 Early morning view on the Murchison Mountains outside Haenertsburg

Haenertsburg lies on the Great Escarpment, high above Magoebaskloof with its lush forest vegetation, lakes and waterfalls.  Often shrouded in mist, the town has a storybook feel – bringing to mind Norse sagas or the tales of the Brothers Grimm. 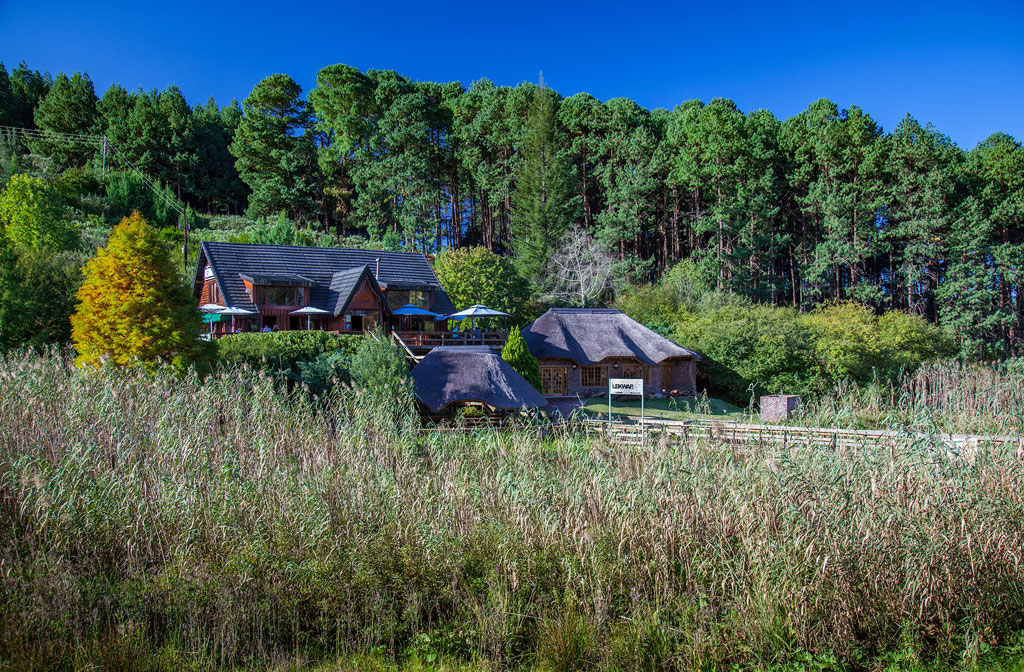 This was the time and place to settle down with a book and a fine red in front of a log fire.  Linda has just the place.  With renowned historian husband professor Louis Changuion, she recreated an 1880s mining town on Haenertsburg’s Rissik Street, calling it ‘The Pennefather Gold Mining Company Limited’. 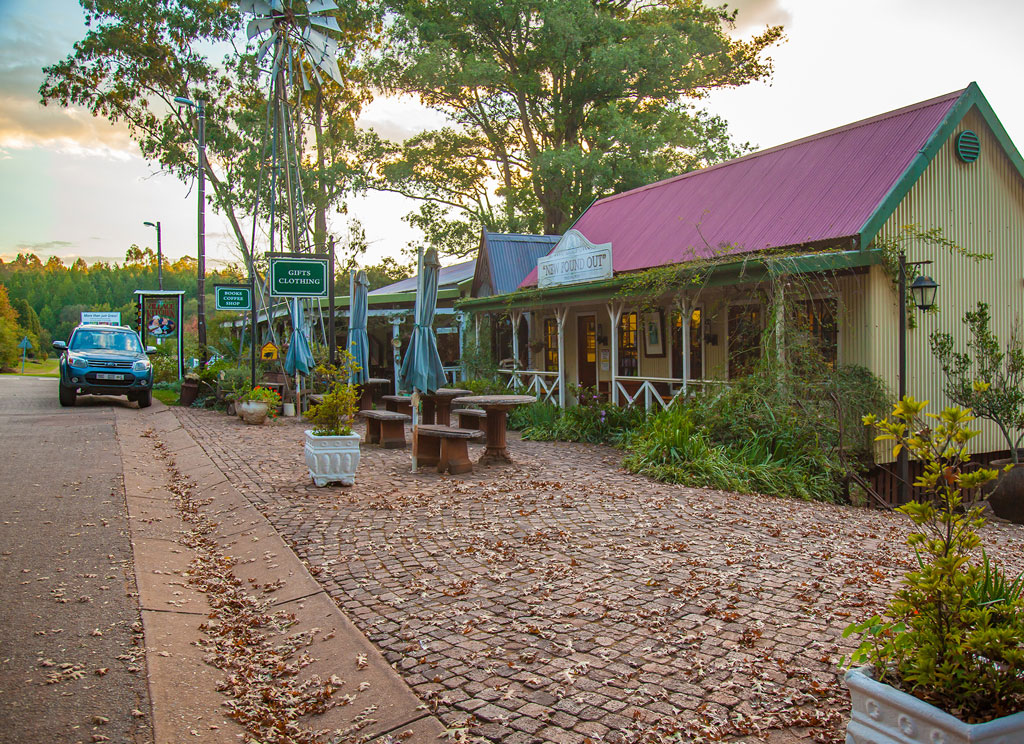 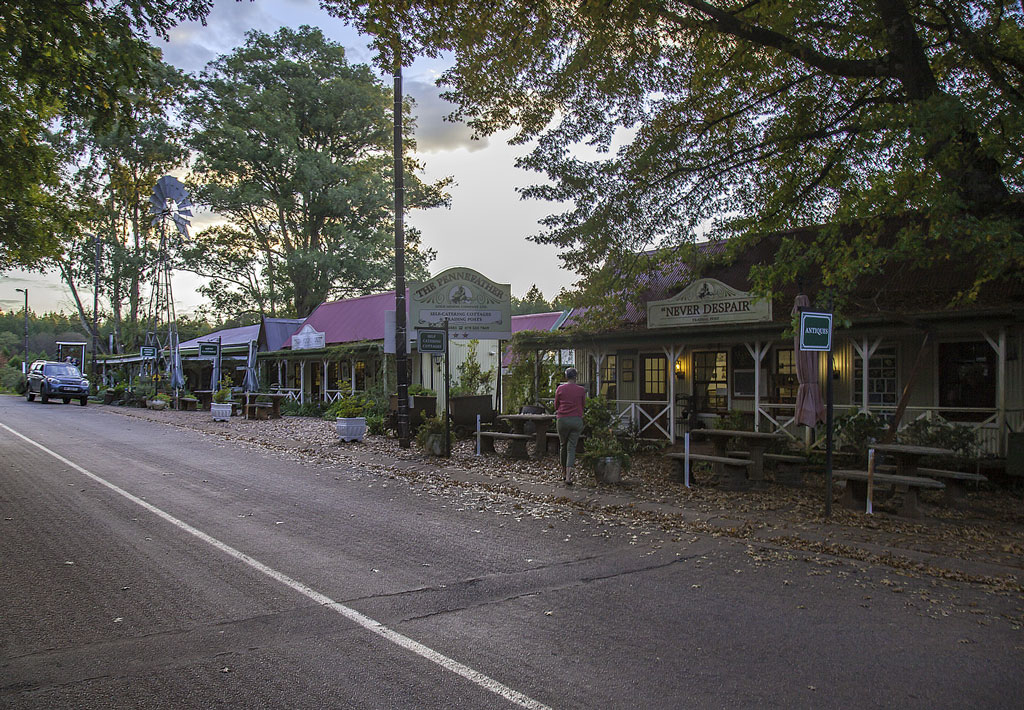 Her corrugated-iron trading stores are filled with books, memorabilia and antiques.   Down a sidestreet are several well-appointed miners’ cottages, named ‘Karl Mauch’, ‘Prester John’, ‘Doel Zeederberg’ and ‘Rider Haggard’ (author of King Solomon’s Mines and She – the latter based on the BaLobedu Rain Queen Modjadji). 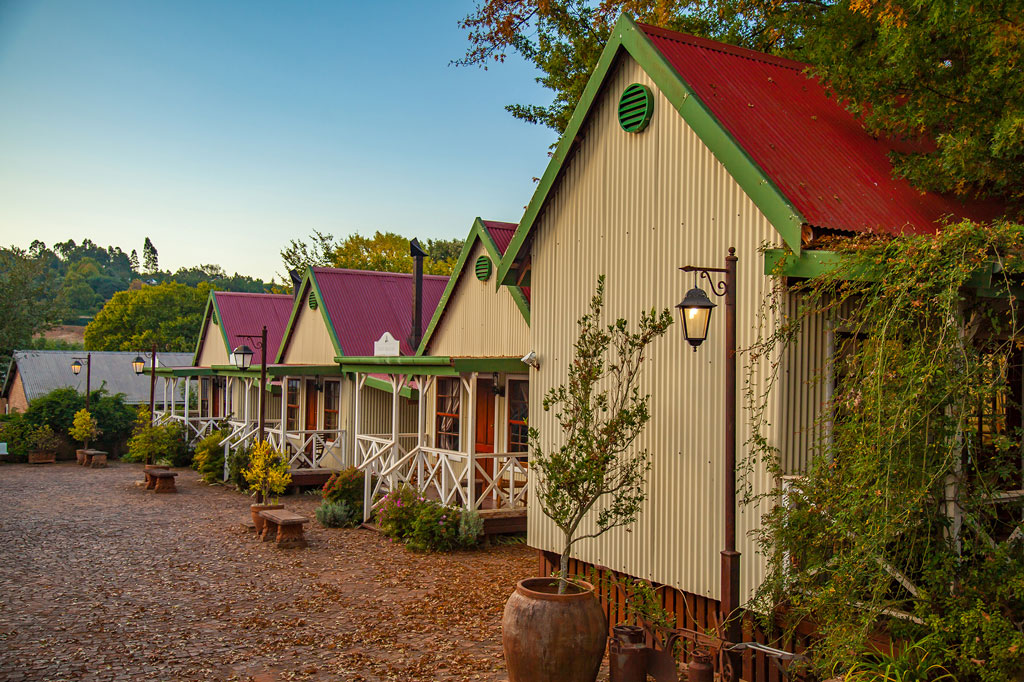 Here I fall asleep, having struck gold:  down in the verdant valley, among the ghosts of hard-drinking sunburnt miners in a smoky bar with a stuffed lion, a honky-tonk piano in the corner and the jolly laughter of girls in strapless gowns.

* Sam Basch grew up in a mining town