With this article I aim to plagiarise the blog posted in 2009 by a young South African on his first visit to the town of Bethulie.

Not really, of course!

His travelogue on “Some of the strangest things…” highlighted interesting facts on Bethulie, where my wife and I overnighted in 2017.  Knowing full well bits of the town’s history, we still learnt much that was new, which had seemingly intrigued our traveller friend who signs himself Shahilj.

Approaching Bethulie from the Eastern Cape town of Venterstad on the R390, one is struck by the impressive Hennie Steyn Bridge across the Orange River.  Spanning 1 152m, it used to be the longest bridge in South Africa, now superseded by the John Ross Parkway in KwaZulu-Natal. 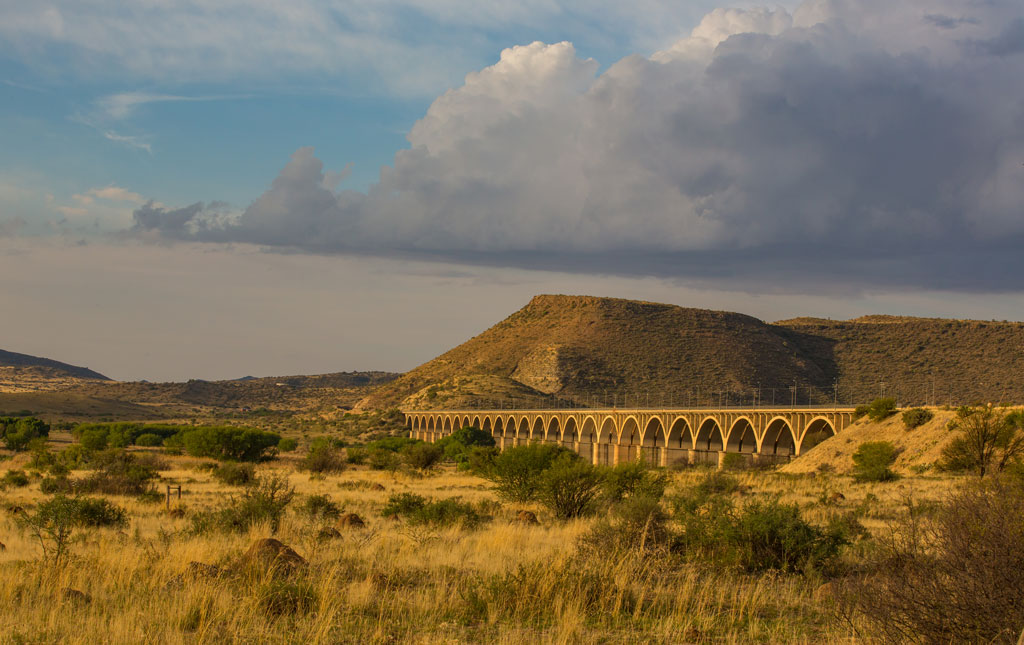 The Hennie Steyn Bridge over the Orange River at Bethulie, seen from the Eastern Cape side

Still, from this vantage point, it is awe-inspiring.   Its arches support both road and rail traffic more than 51m above the river.  Townsfolk and tourists often dangle their feet over the edge, sipping sundowners.  As we stopped for photographs, the purple-painted Shosholoza Meyl long-distance train heading into the Free State crossed the bridge.  Its driver blew the horn and waved.

In 1900, at the height of the Anglo-Boer War[1] (1899-1902), Boer commandos blew up the railway bridge.  British forces managed to secure the road bridge, while the Royal Engineers speedily laid tracks across the river to bring up supplies from the Cape Colony. 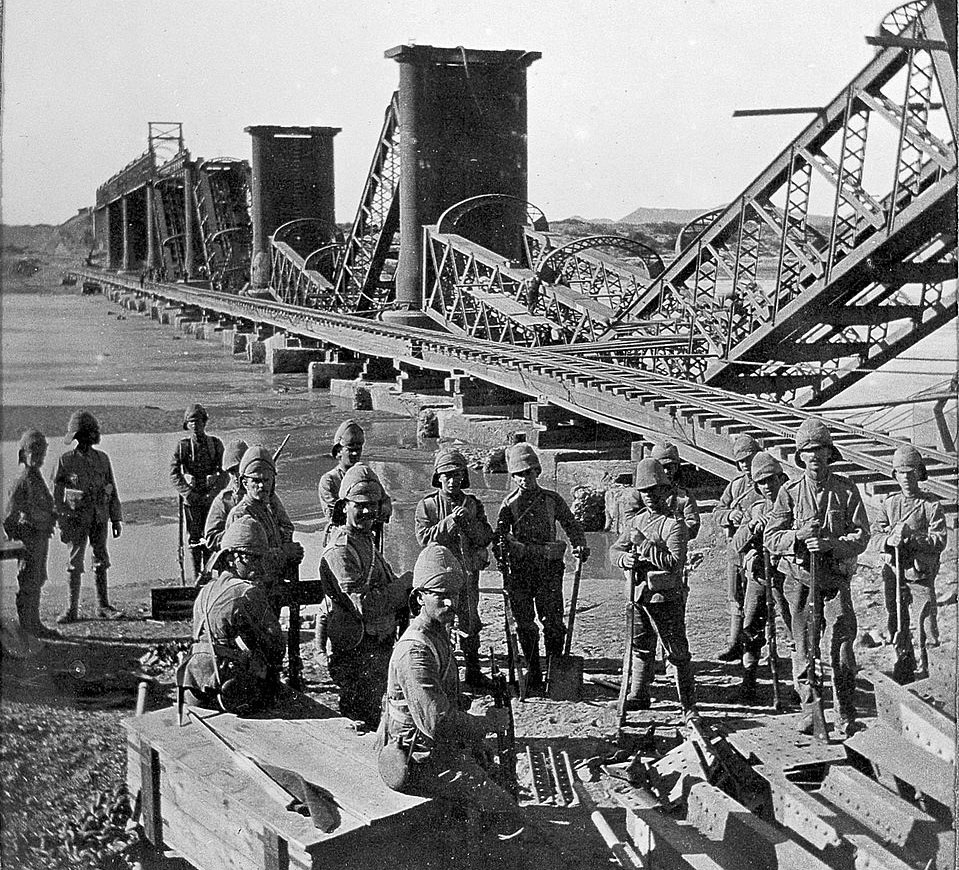 What we see today is a new structure – although in a contemporary photograph the columns closely resemble those of the modern-day bridge.

Continuing on the R390, skirting the town, one reaches a sign on the right in Afrikaans:  Bethulie Kampkerkhof, which means ‘camp cemetery’.  At this memorial site lie the remains of more than 1 700 people, mostly women and children, who died in this, the third largest British concentration camp, in 1901. 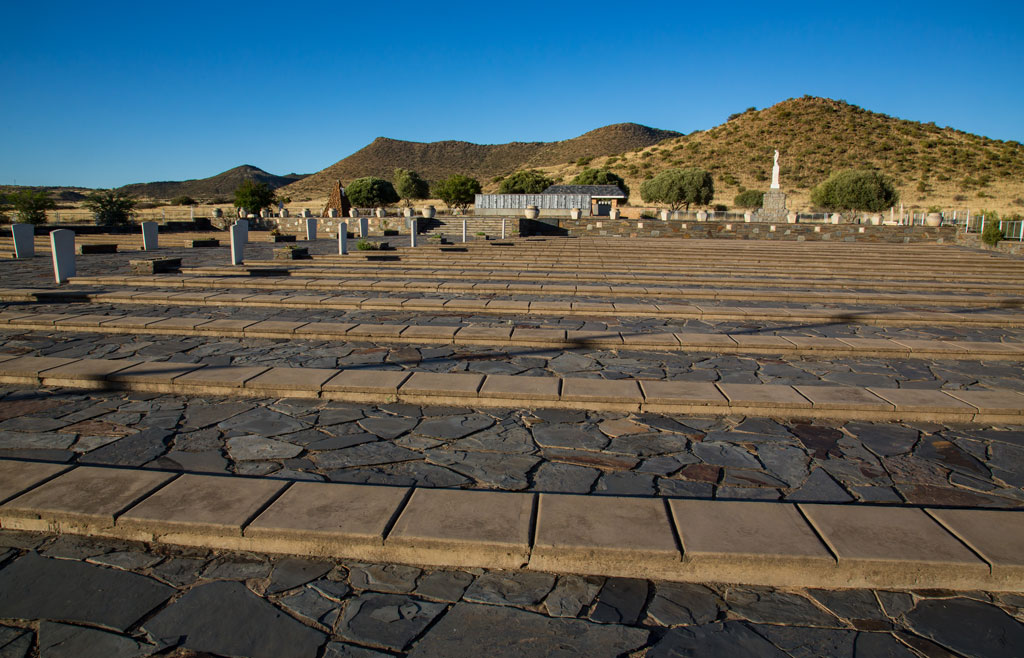 This is a grim toll, considering that around 4 800 people were interned (concentrated) in this camp at the time of its eventual closing after just more than a year.  It’s hardly surprising, though, given the inhumane living conditions and incompetence, if not downright shocking apathy, negligence and callousness on the part of the authorities.  Tents were not only in short supply but often leaked or got torn on the windswept plain.  Up to 18 persons crowded into a single bell tent, lacking proper sustenance, clean water and sanitation, fostered the spread of diseases such as measles, typhoid and dysentery, while freezing winter months simply killed off the weak and sickly. 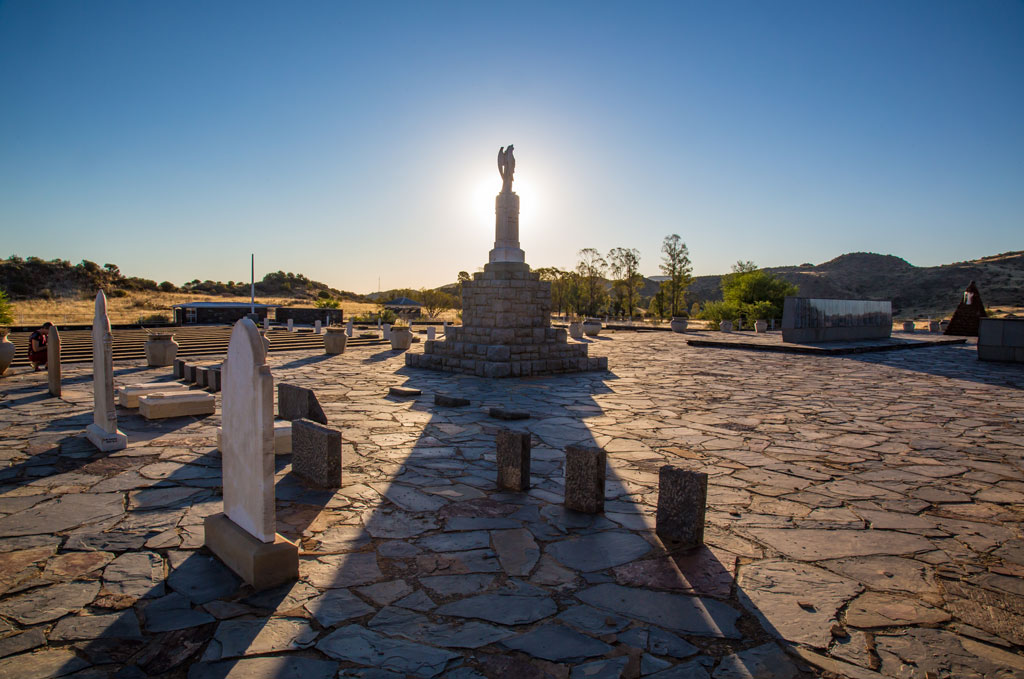 Estimates put the deaths in British concentration camps all over South Africa[2], including at Bethulie, at close to 30 000 Afrikaner[3] women and children – a significant proportion (19%) of the total Afrikaner population of the Transvaal and Orange Free State republics at war with Britain at the time.  By contrast Boer casualties on the battlefield numbered probably less than 4 000.  Around 18 000 Black people caught up in the conflict died in separate concentration camps. 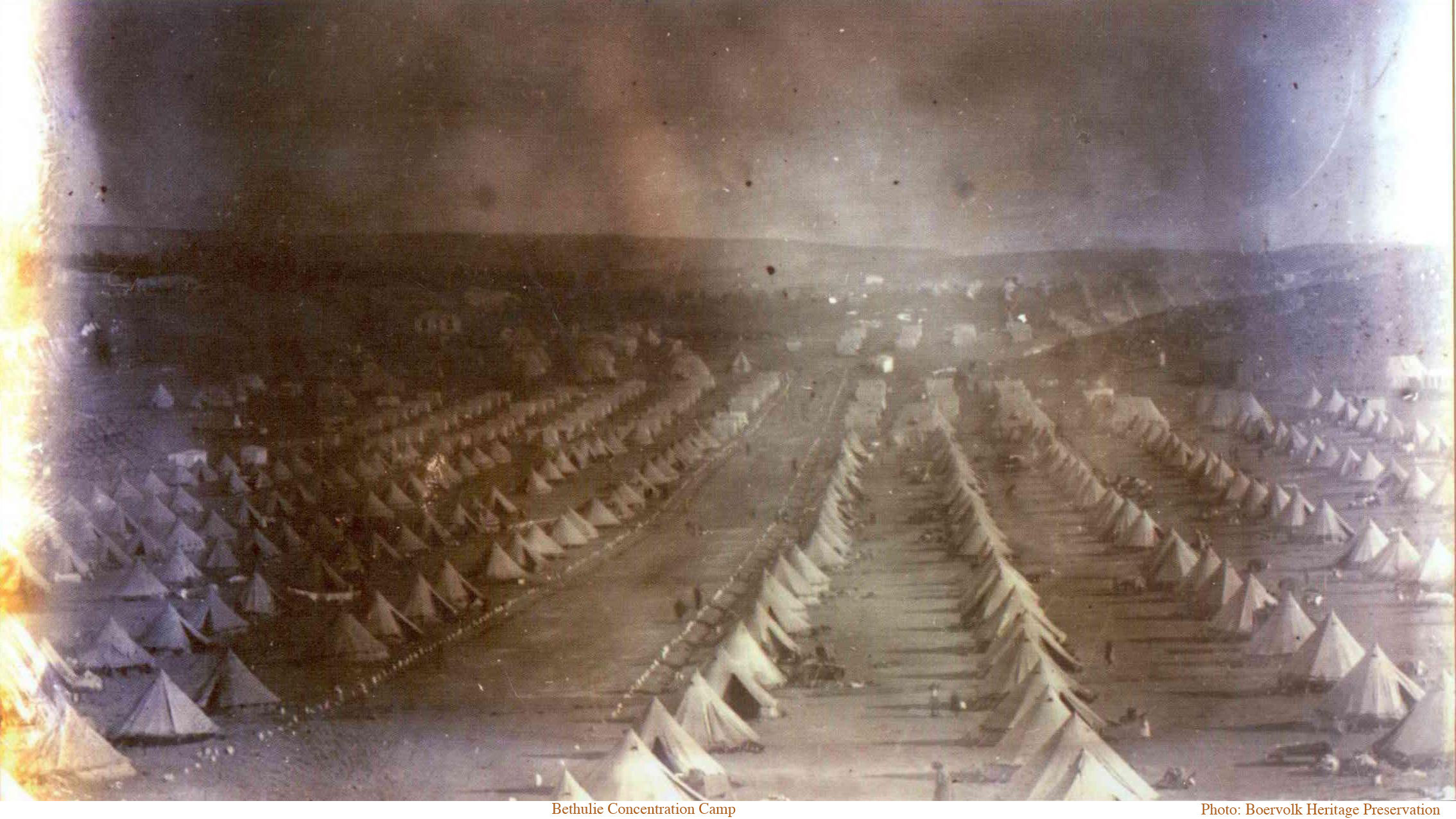 Ironically the Bethulie camp was moved three times during 1901, the second being located in a swampy area, soon dubbed ‘murder camp’ by the inmates.  On one day in August 1901 no less than 24 deaths occurred, as reported by superintendent Russel Deare.  He could be blamed for Bethulie being regarded as a ‘bad’ camp with very high mortality rates.  Dismissed only in December 1901, he was replaced by the very competent Lieutenant St John Cole Bowen, inspector of camps and superintendent of the Norvalspont camp.

At the suggestion of Hestél Griesel, owner of the Oppie-Koppie B&B, we scouted around for the English Monument.  An awkward cube-like structure, it remains unfinished, curiously built with funds from the Imperial (British) government meant for the upkeep of war graves.  It is likely the third camp was located in this vicinity with the cemetery adjoining it.  Remnants of the graves can still be seen between this monument, called the ‘Weeping Monument’ by its designer, and a memorial obelisk. 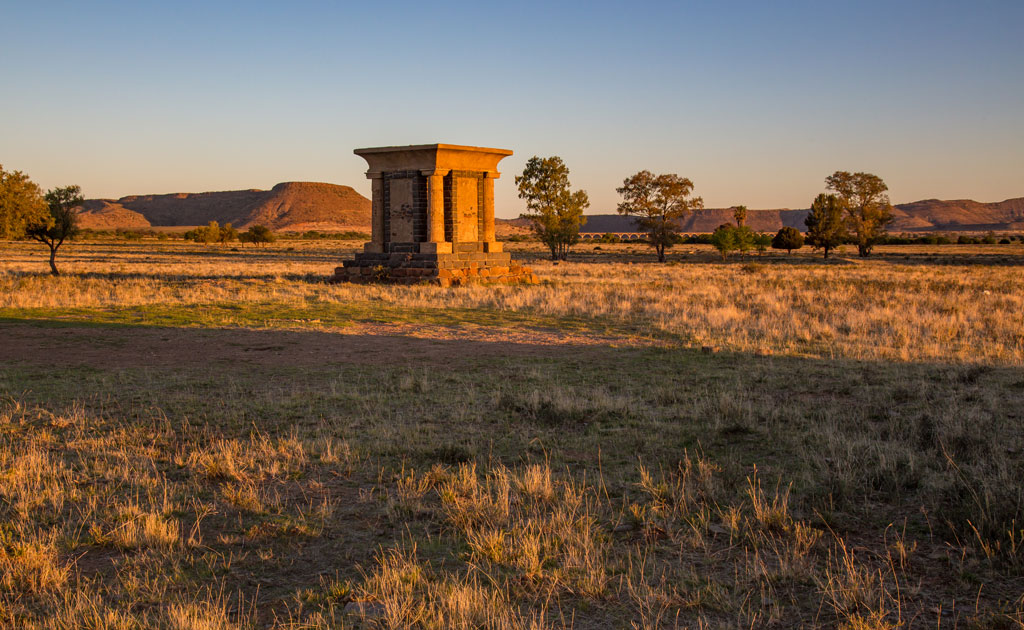 The unfinished English Monument, on the presumed site of the Bethulie Concentration Camp

The cemetery was relocated to its present site in the 1960s as it was feared the graves would be submerged by the rising waters of the massive Lake Gariep to be constructed nearby. 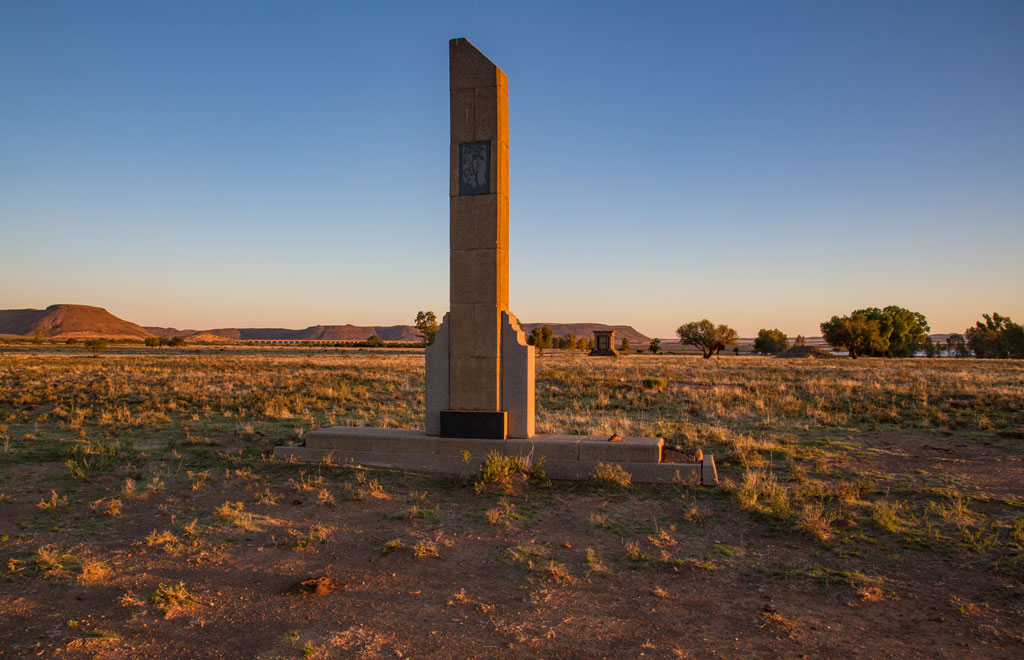 Site of the Bethulie Concentration Camp and adjoining cemetery, which remnants lie between the memorial obelisk and the English Monument (background)

Visiting the concentration camp memorial site, where the exhumed remains of 1 717 individuals were reburied, is a heart-rending experience.  In her interesting book on Bethulie, Trudie Venter explains some of the symbolism at the cemetery.  Poignantly, a ‘mother and child’ monument unveiled at the old cemetery in 1924, consisting of a statue of two angels, was separated at this memorial site. 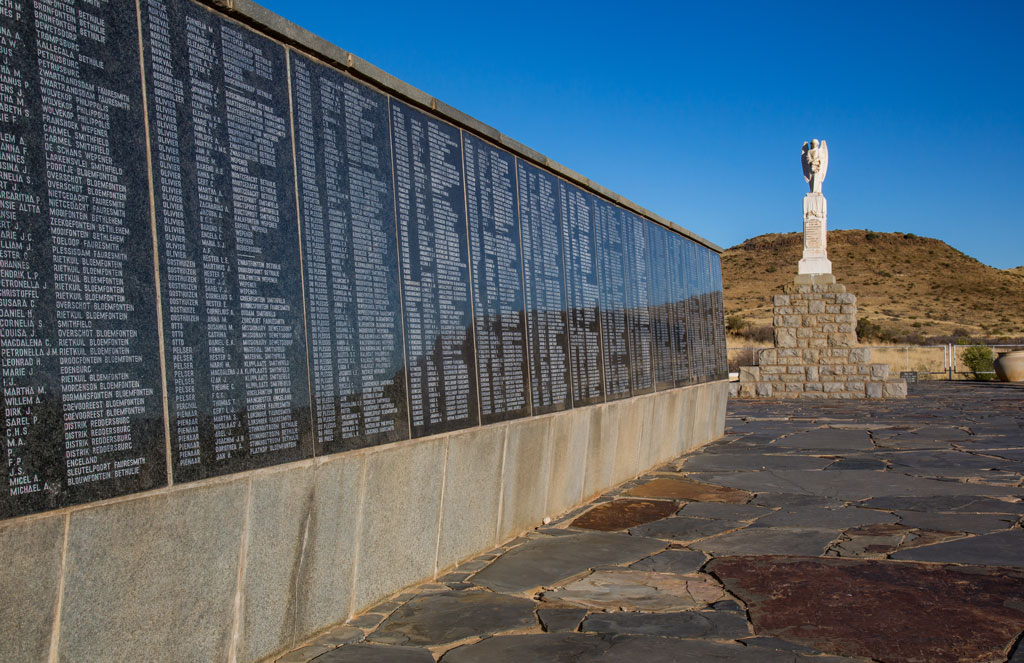 The impressions of Shahilj writing in his blog came to mind:  “Places of death hold so many stories – lost to this world.  Places of mass-murder are worse.”

As the sun dipping below the horizon painted the world around us in soft colours, from peach and mauve to indigo, we headed back into town – to ‘Die Ou Kar’ (The Old Car) grill restaurant in the main street where the locals hang out.  It was recommended to us at the B&B. 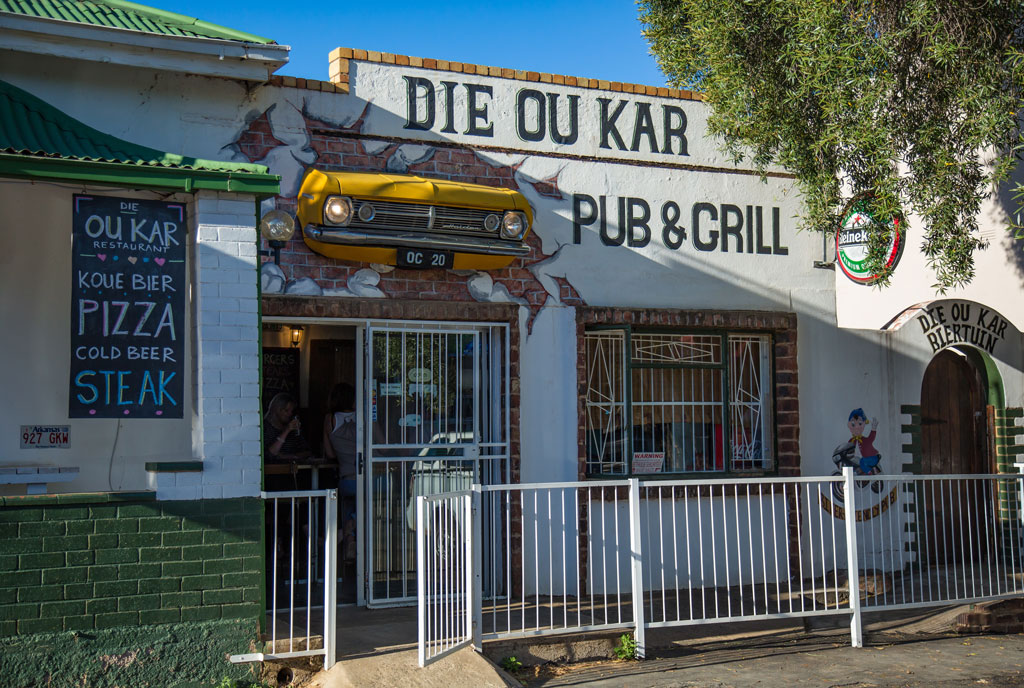 And we were not disappointed.  Not likely to ever rate a Michelin star, it was inviting, exuding a small-town charm.  Townspeople were loudly commenting on a rugby match broadcast on the television in the bar.  We chatted to the manager who let slip that the place belonged to a South African hip-hop artist.

The thick Karoo lamb chops were succulent and tender, with the subtle herby taste imparted by the fragrant shrub vegetation of this semi-arid part of the country. 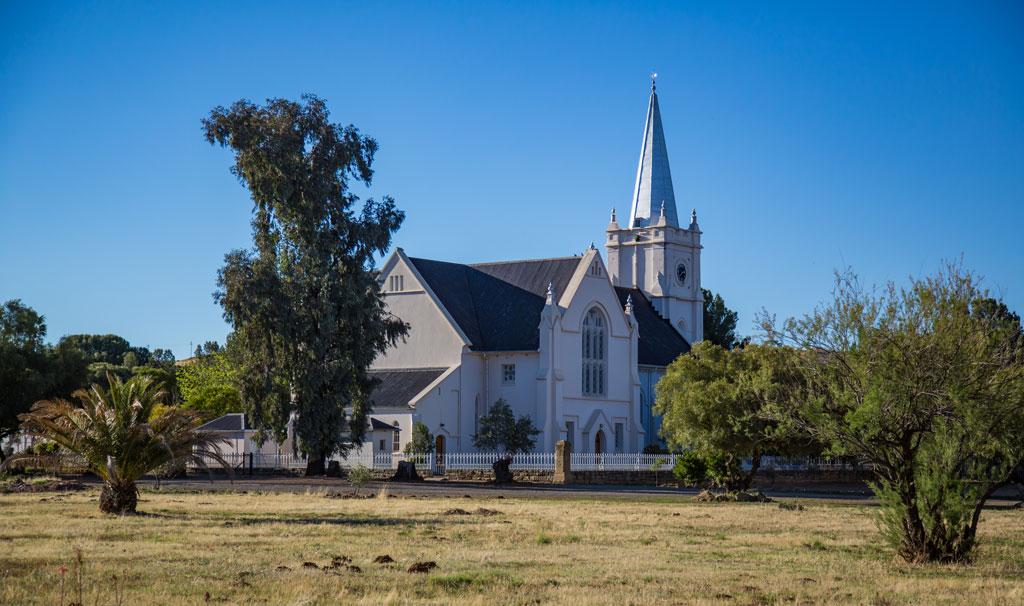 Like Shahilj we missed out a lot on this all too brief a visit.  There is still much to see and experience:  the Pellissier Museum and the old Royal Hotel, now renovated by Anthony (Tony) Hocking who lined every wall with books from his huge collection.  He essentially created the Book Hotel in Bethulie, as journalists Chris Marais and Julienne du Toit pointed out. 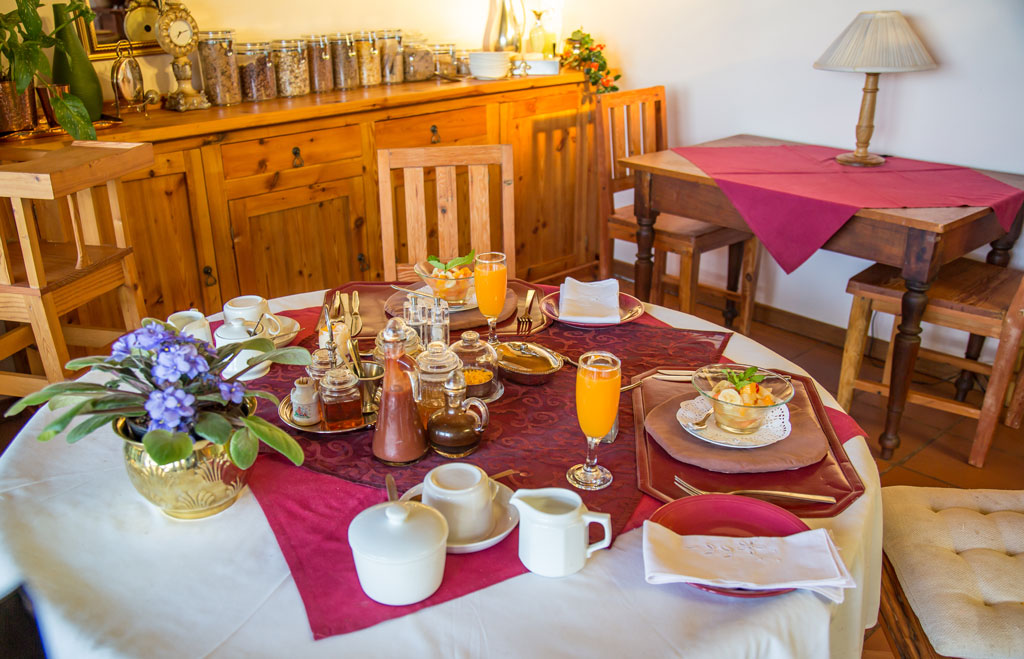 Next time in Bethulie we’ll track down Tony for his phenomenal knowledge of the historic town and especially the Anglo-Boer War.  Or even Trudie Venter whose book we’ve only managed to page through at the B&B.  It is apparently now out of print.

Sunset on the Orange River near Bethulie

All photographs by the author, except where otherwise indicated.

[1] The conflict was often referred to as the Boer War, lately the South African War

[2] Disclaimer:  my paternal grandmother survived the horrors of a British concentration camp in Transvaal;  she was then aged 15