It’s been on our bucket list:  to see the wildflowers bursting into a kaleidoscope of spring colour.

Up South Africa’s West Coast and into the Northern Cape province the arid landscape turns into a spectacle almost beyond belief.  This happens in August and early September every year.  Depending on the amount of rain in July and August (winter in the southern hemisphere), the flowers could be “good” or “not so good.”

This then is a gamble.  One has to book accommodation well in advance in the hope of being lucky.  But even if the flower display is diminished, the experience in those remote parts is always well worth the trip.

From Cape Town where we rented a small car to head north, fields of canola painted a bright yellow patchwork to the horizon.  We stopped every so often to take cellphone pictures, knowing full well that several hundred kilometres remained to reach Strandfontein on the Atlantic coast.

On the way an obligatory stop for wine tasting at the Klawer Wynkelders (cellars) was worth it, as the African Ruby wine proved an excellent fortification against the expected freeze ahead.

The cold did not bode well for riding the magic flower carpet.  But we pressed on nonetheless.

Fresh fish for dinner at the beachfront eatery in Strandfontein, as the sun sank spectacularly into the ocean.  A lovely sight, made more interesting by the dense fog blanketing the landscape in the morning. 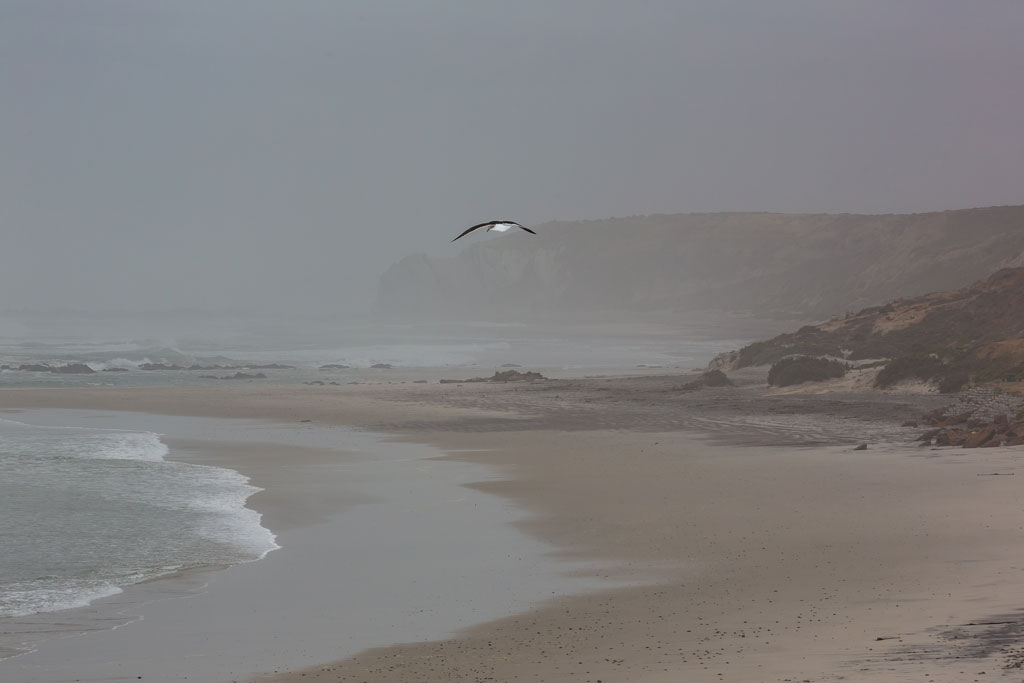 We drove to nearby Doringbaai (originally Doornbaai in Dutch – if you need it translated:  Thorn Bay), site of a disused fish factory.  Now operating as Fryer’s Cove Winery, with vineyards dusted by ocean spray only 500 metres away, one can sample famed West Coast snoek with a chilled Sauvignon blanc.  Not today, though.  The blustery weather was only good for photographs of the gritty structures and solemn skies. 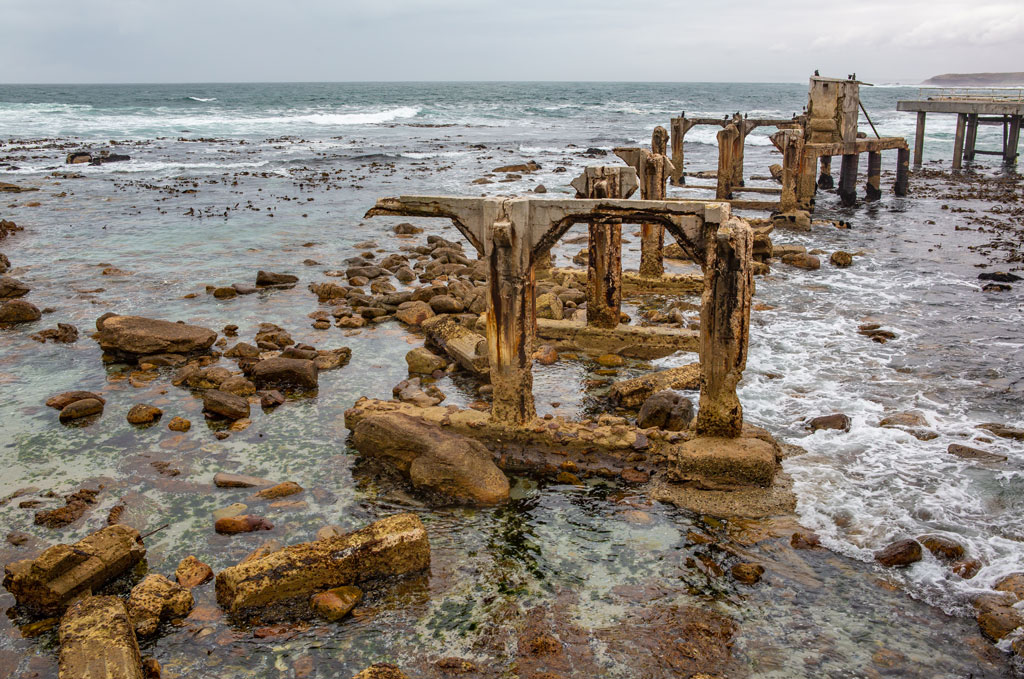 Derelict structures of the former fish factory at Doringbaai 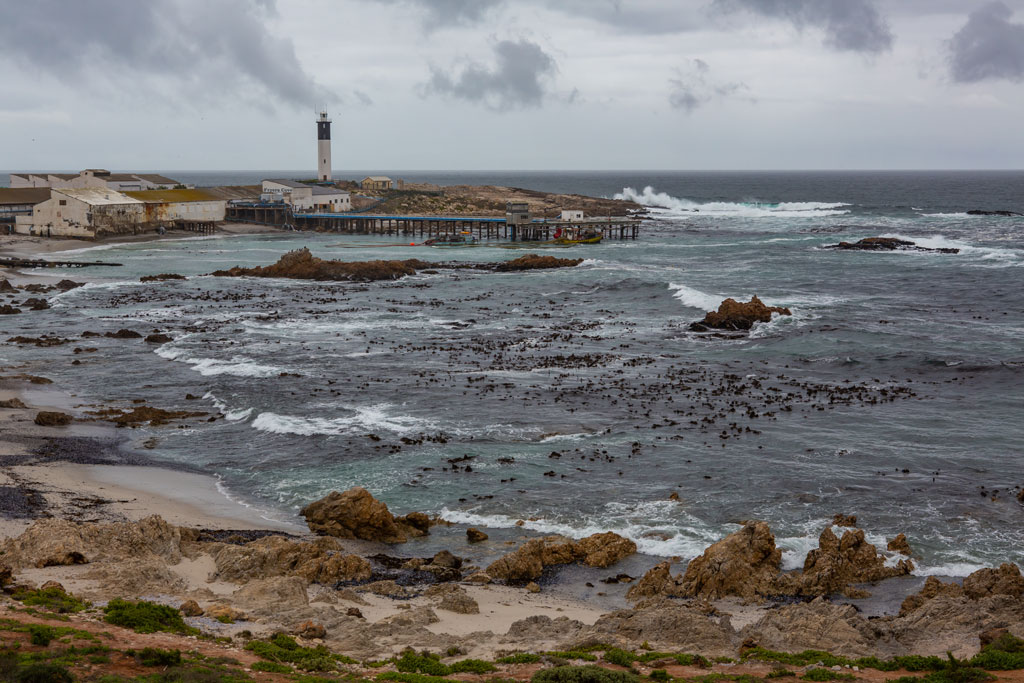 Interestingly, the derelict building also houses a commercial abalone farm.  With abalone being poached to extinction along South Africa’s coastline, an enterprise like this will be hard-pressed to come close to meeting the insatiable Asian demand for this delicacy.

A quick stop for wine tasting (again), this time at the Lutzville Kelders.  Wrong:  not a quick stop.  Each sampling five wines, along with a light meal, takes time.  But worth it, including tasting the Noble Late Harvest – the result of noble rot, i.e. an exceedingly sweet dessert wine made from grapes infected by the botrytis cinerea fungus.

At Vanrhynsdorp we stocked up on firewood with which to beat the cold in Kamieskroon.  Our cottage had a fireplace, of course – we checked when booking. Still no magic flower carpet.  Small patches here and there, but it’s the cold, say the locals.  Try the Namaqualand National Park, then.

Grey skies, impressive landscape.  As the sun appeared later in the day, so the daisies started opening up meekly. 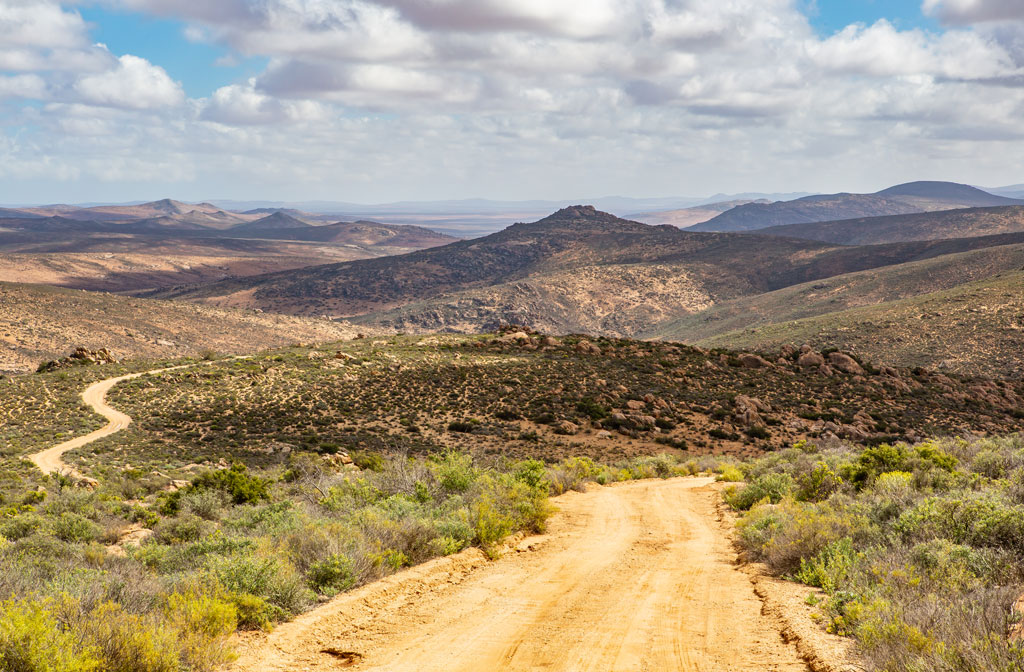 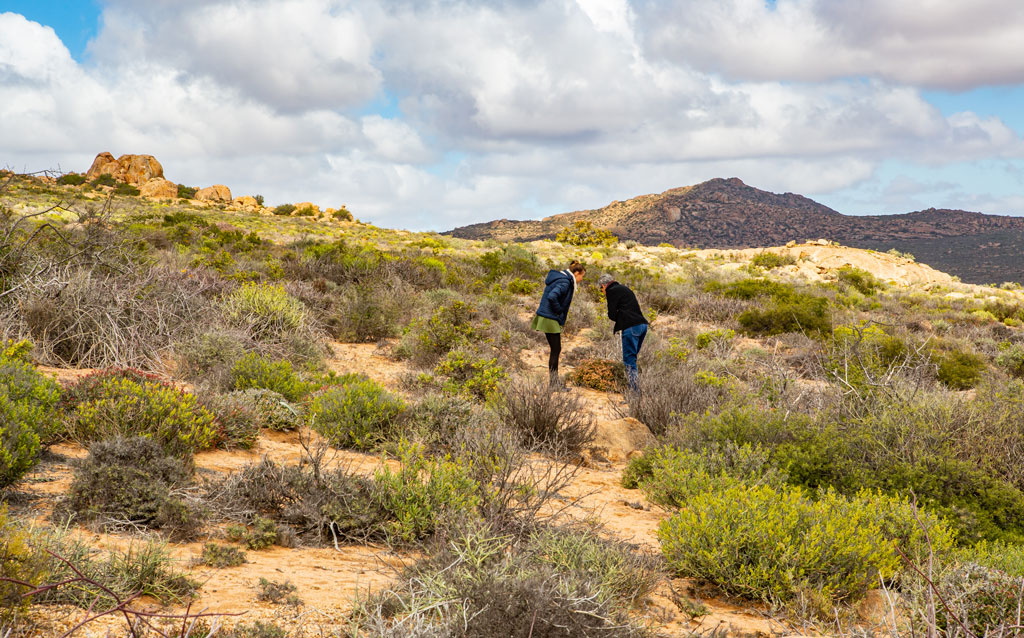 Checking the exquisite flora in the arid Namaqualand National Park

Reaching the town of Springbok, we were told to try Nababeep some kilometres further on.  In fact, this mining town is only an hour’s drive from the Namibian border.  Some flowers here, but patchy at best. 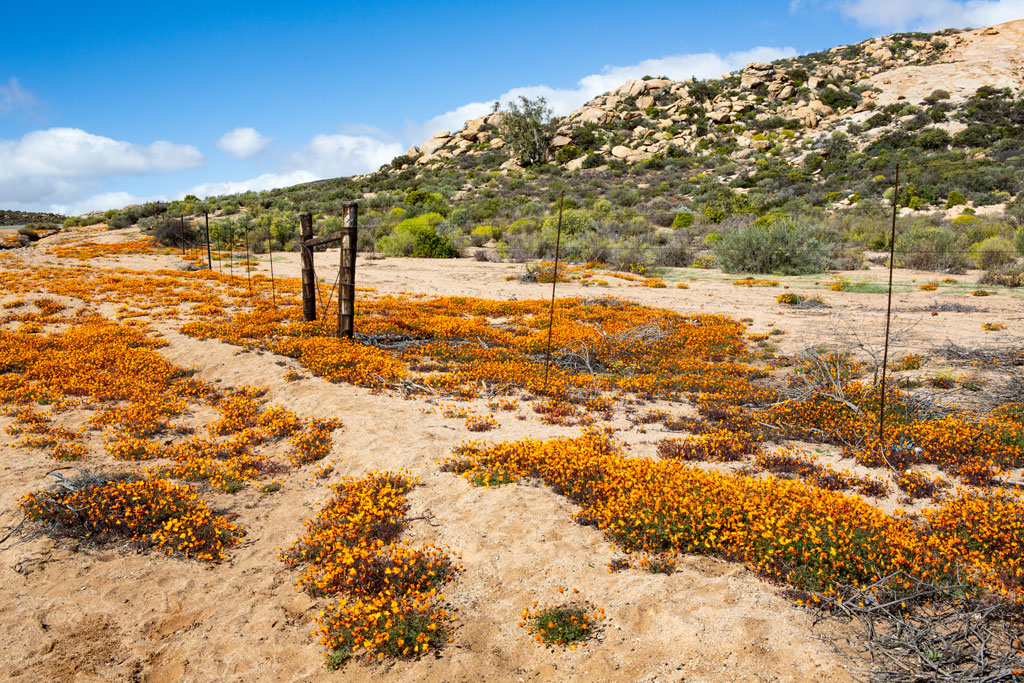 Patches of flowers tentatively opening on the way to Nababeep

An afternoon drive to the Goegab Nature Reserve revealed astonishing geography and desert flora, including numerous quiver trees (Afrikaans:  kokerboom).  The earliest record of these hardy plants (Aloidendron dichotomum) was made by the Cape governor Simon van der Stel when he toured the area in 1685. 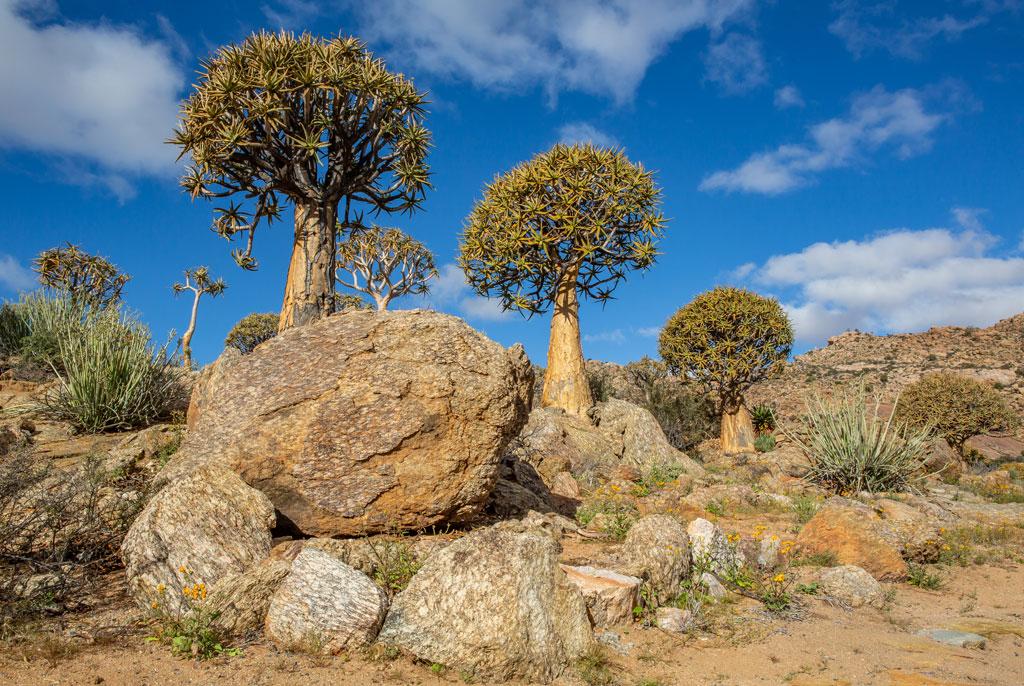 Quiver trees in the Goegap Nature Reserve near Springbok. These hardy plants can live up to 80 years. Climate change is blamed for some dying in numbers now. 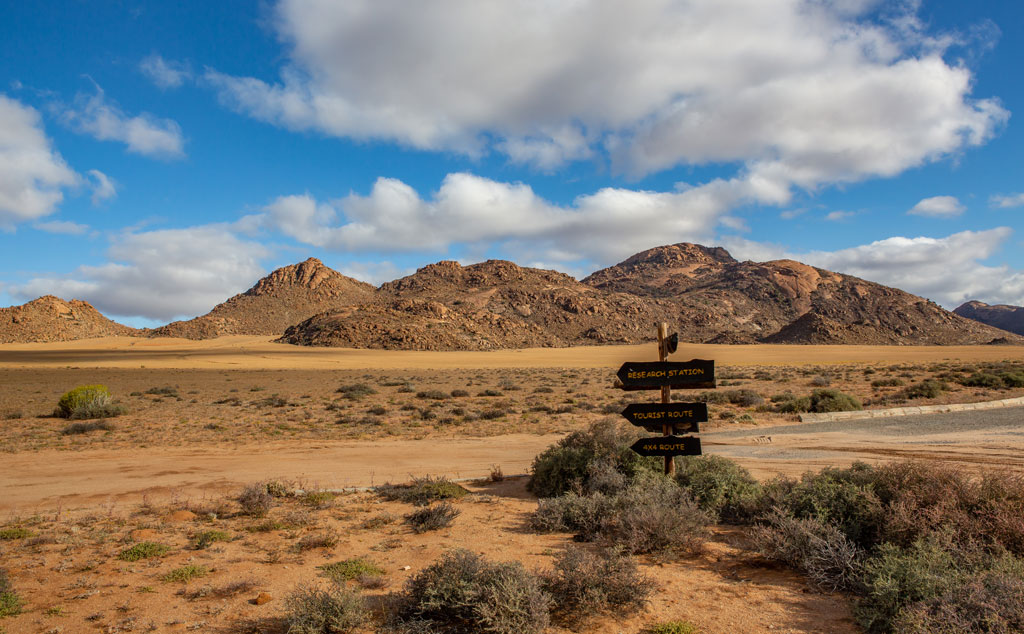 Route markers in the Goegap Nature Reserve with its spectacular geography

Despite suffering a serious bout of flu, Nama White guest house manager Bester made a delicious breakfast before helping to rid the car’s windscreen of ice that had formed during the night!

Minute crawlies. This image replaces the one poste

Savour spring. As the winter gives way to spring t

Women’s Month. My tribute to all women of the wo

More winter food. Our variation on the popular Ita

Winter food. We succeeded in making our own homema

Taking office. A new Chief of the South African Na

Sun goes down. The one evening on the farm I got a

Painted sky. As the sun went down on a farm in the

Teasing out an antlion. The perfect sand funnel of

Stuck in mud. Sometimes the fun part of a holiday

Sunset on a Karoo farm. Best place to be in the ti

Valley of Desolation. Spectacular view at sunset i