Just as foreigners flying directly into Cape Town, without stopping over to see what Johannesburg has to offer, many tourists heading for Bali miss out on Indonesia’s capital Jakarta.

It hardly ranks among the world’s beautiful cities.  To see those, one has to visit San Francisco, Venice or Rio de Janeiro.  But hidden in her bosom you’ll find something exotic, of old seafarers and the Spice Islands – and her centuries-old link with the Cape. 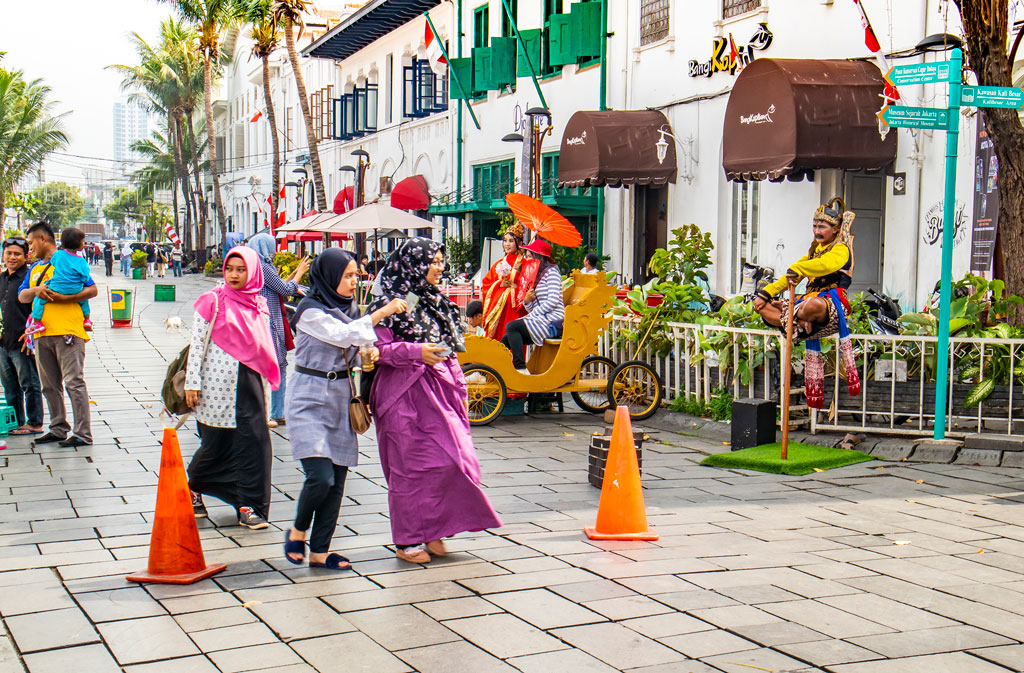 The vibrancy of Jakarta, as seen in the colourful dress of her people in a street near Fatahillah Square

In the 17th century, Jakarta, then still called Batavia, was the seat of the Dutch East India Company’s highly profitable spice trade.  Today it is an ever expanding metropolis of glass skyscrapers and motorways amid terracotta-roofed dwellings, Asian courtesy and tropical disorder. 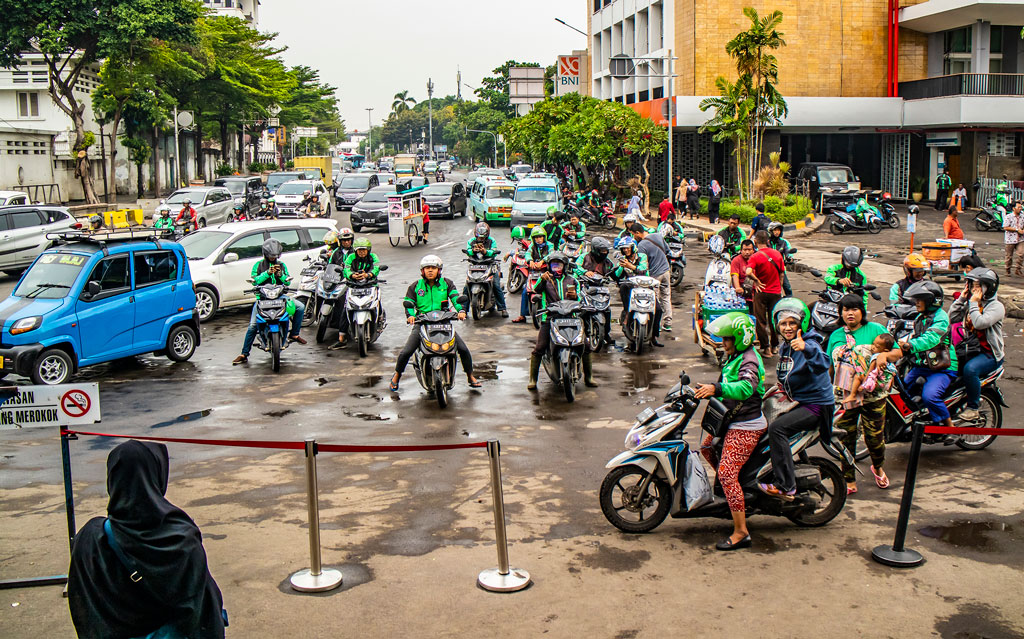 It’s as if her inhabitants, small in stature, are unconcerned about the earth’s crust below their feet that is forever buckling and boiling.  Actually a dangerous place.  Indonesia consists of tens of thousands of islands strung like pearls below Singapore and Borneo.  Jakarta nestles on the northern coast of Java Island.  Bali is further east.  In the narrow Sunda strait between Java and Sumatra the volcano Krakatoa erupted in 1883 with a titanic explosion heard more than 3,500km away.  And a deadly sea wave, nowadays called a tsunami.

Few tourists are bothered.  At the hotel the doorman greets us with a friendly bow, palms pressed together.  By replying “Terima Kasih” (thank you), you create goodwill, just like with the restaurant waiters. 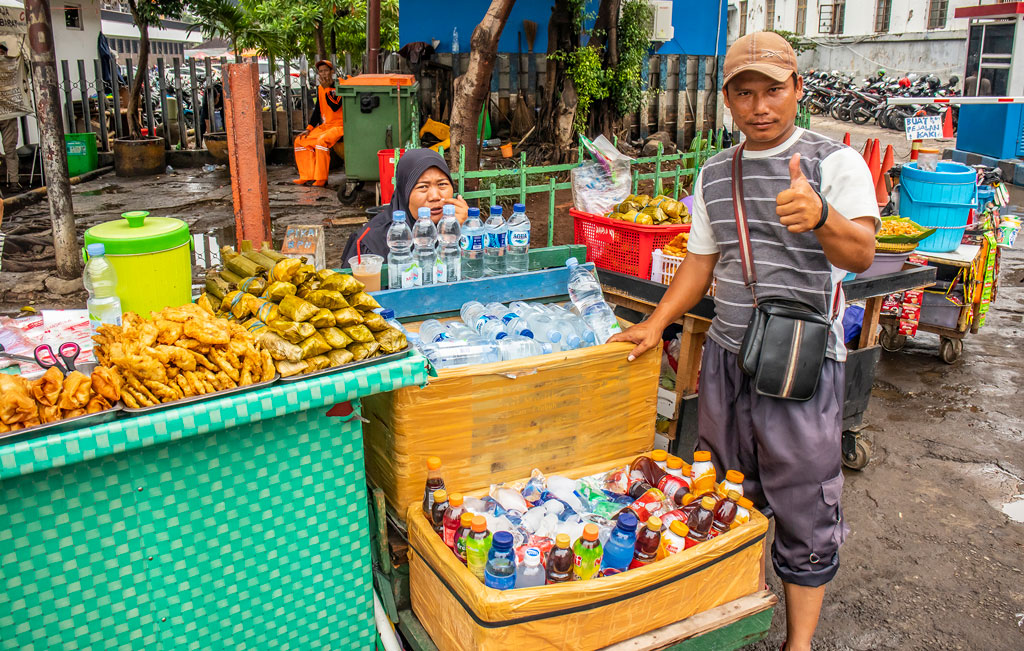 In late afternoon you can cool down at the pool with an ice-cold Bintang beer, because on the equator humidity is a constant.  On the menu are Western dishes along with Asian cuisine, but what distinguishes some Jakarta restaurants is the Dutch influence.  We could easily read ‘Frikadel van Grote Garnalen’ or ‘Bitterballetjes’:  potato croquettes with spiced meat and chopped spring onion.  For mains we choose one of the Indonesian Rijsttafel dishes:  ‘Kerri van Kip’, a Javanese chicken curry prepared by the Nyonya-Babah – people of Chinese origin born on the South Sea Islands.  And for dessert there is ‘Pisang Goreng’ (fried banana), ‘Klappertart’, ‘Oliebollen’ or ‘Appelflappen’ (pancakes). 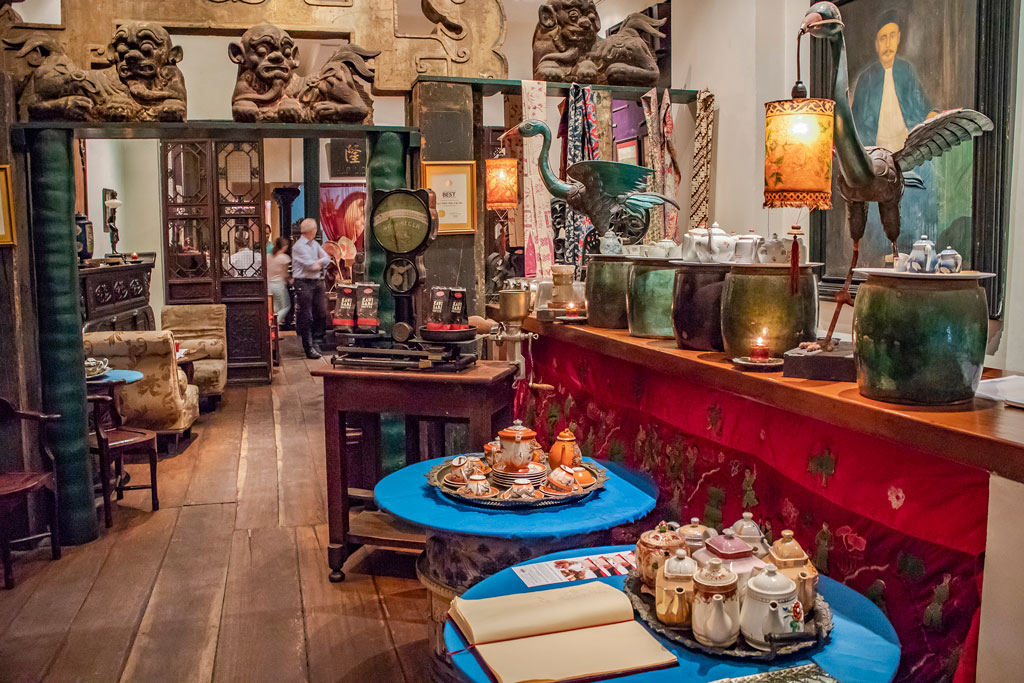 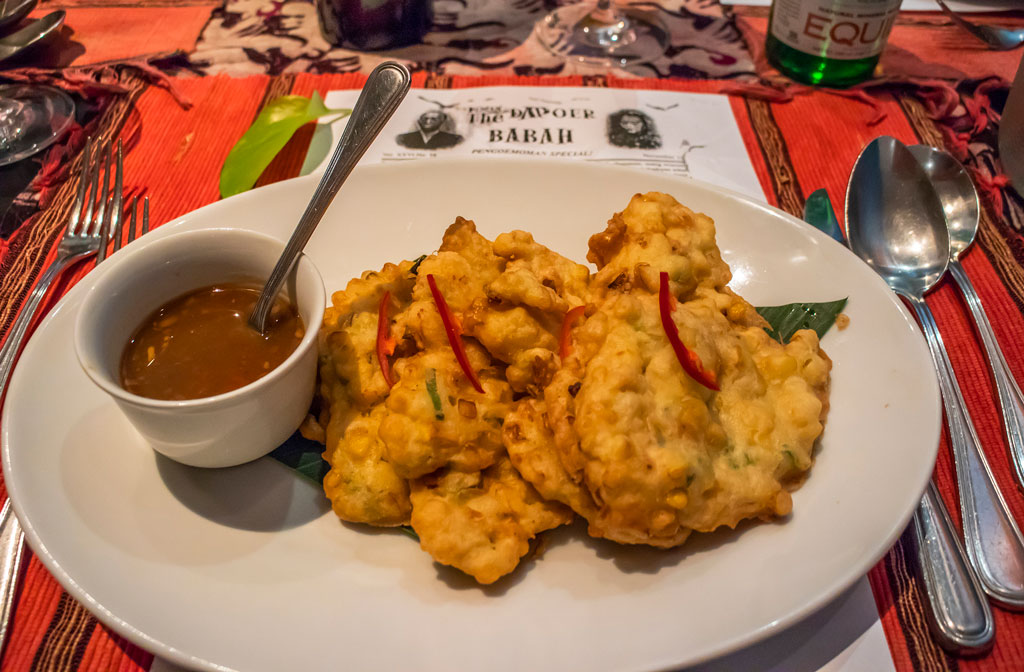 A substantial starter in an upmarket restaurant in Jakarta 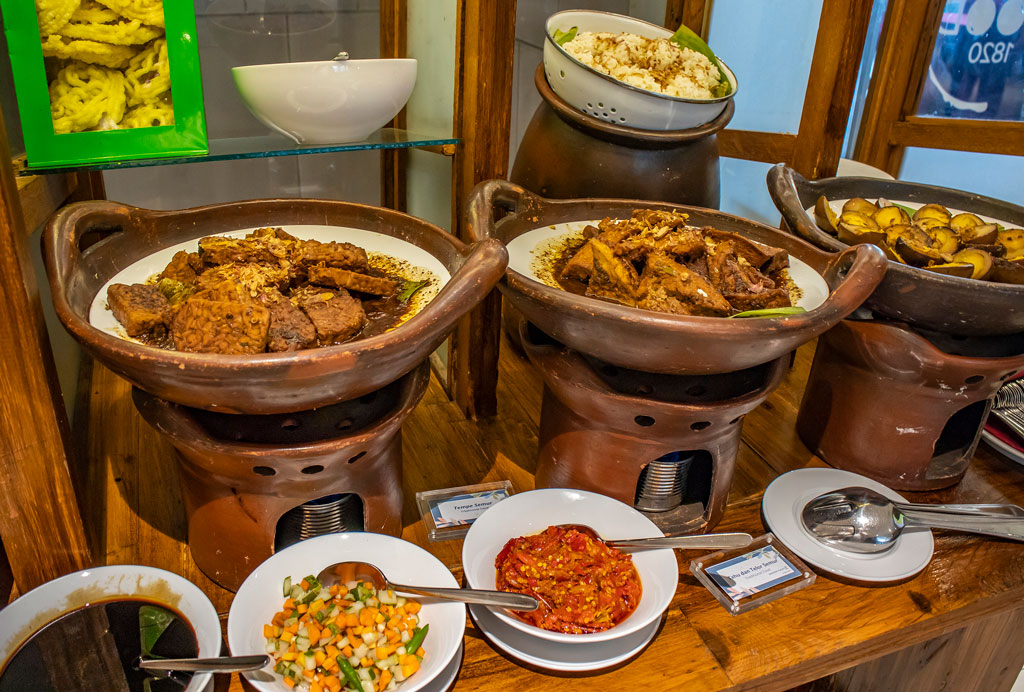 Display of Oriental food in the hotel

Actually one can eat good food and cheaply on the street.  It is freshly made, almost always steamed rice or egg noodles with meat or vegetables, and fried fritters.  My favourite is chicken kebabs (‘ayam sate’ – pronounced ‘satay’) barbequed on a small grill and served with peanut butter sauce. 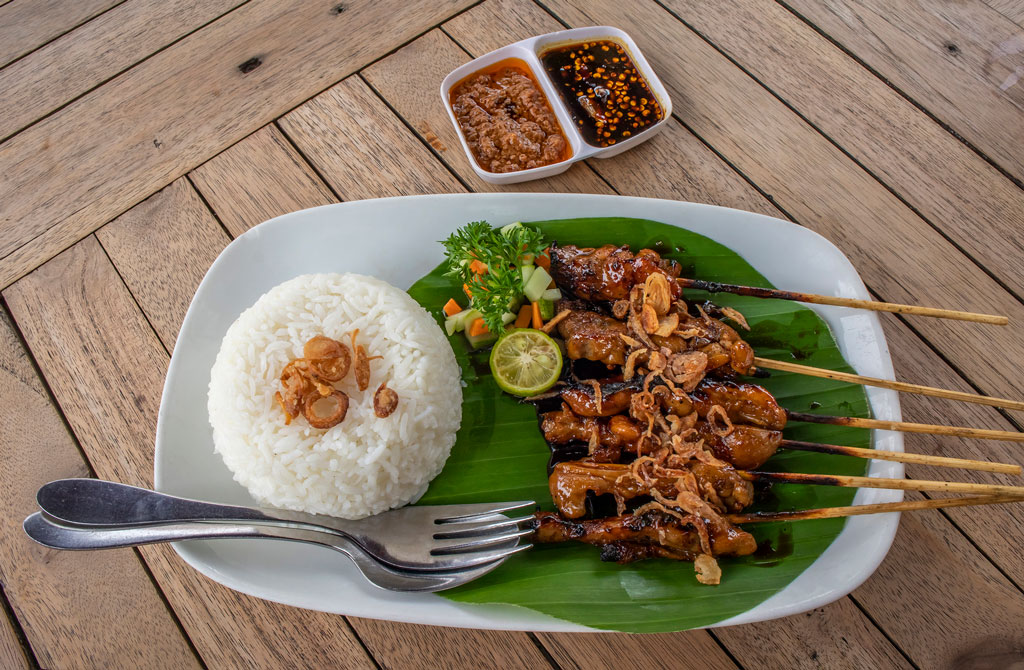 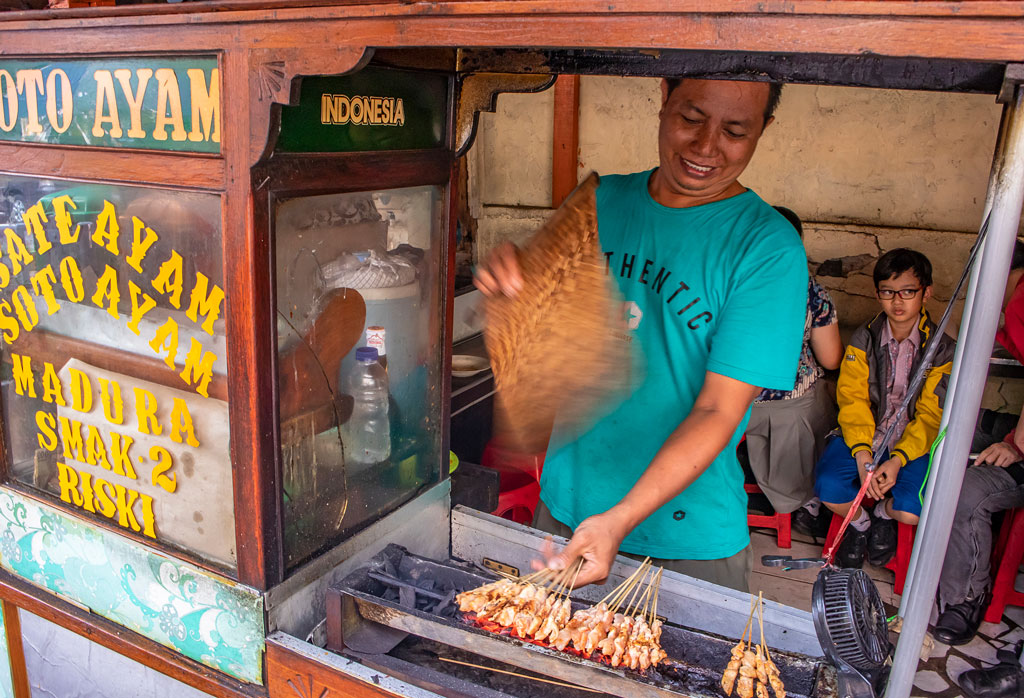 As a foreigner one attracts attention.  Especially the youth are wont to chat, even if only to find out where you’re from.  My reply, ‘Afrika Selatan’ (South Africa), elicits a surprised giggle.  Then I’m obliged to pose for a ‘selfie’ or to write down my name.

It was interesting to note the numerous words in the Bahasa Indonesia language with an echo in Afrikaans, like ‘pisang’ but also ‘pondok’ (cottage) and even ‘kampung’ (village or suburb).  ‘Polisi’ and ‘apotek’ are unmistakable, post office is written ‘Kantor Pos’.  If you inadvertently walk through someone’s pavement kitchen, say:  ‘Permisi’!

At the station where I tried to buy an e-ticket for the train – which someone immediately assisted with – the word ‘Batal’ appears on the screen:  pay (like ‘betaal’ in Afrikaans).  As it is, instructions can be selected in several languages, but I was still tentatively working out Jakarta’s modern transport system. 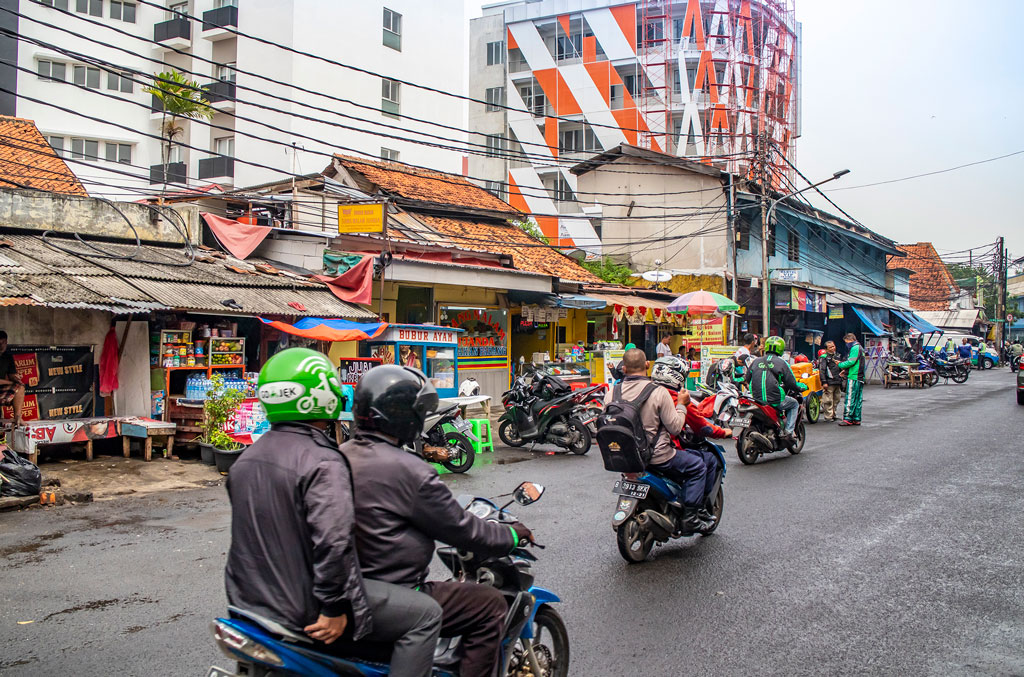 Motorbike taxis, hailed by cellphone app, are the way to go

Besides neat trains, there’s an excellent bus service, taxis and hundreds of the three-wheeled motorbikes called ‘bajaj’.  Negotiate with these drivers before embarking.  This mistake probably cost me four times the usual fare.  For the brave, there are several Apps that one can download on the cellphone to hail a motorbike taxi.  They effortlessly negotiate Jakarta’s chaotic traffic, weaving among cars without hesitation – or colliding – like flitting fish. 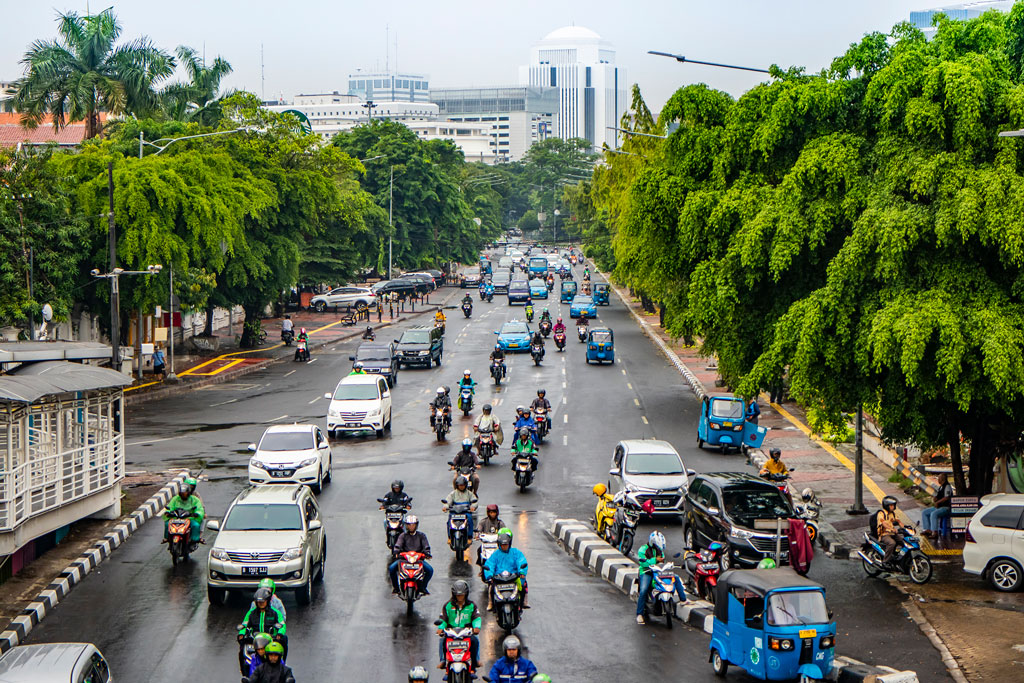 Walking is hardly an option.  I hiked for miles just trying to cross the street to Fatahillah Square, centre of old Batavia, often called the Queen of the East. 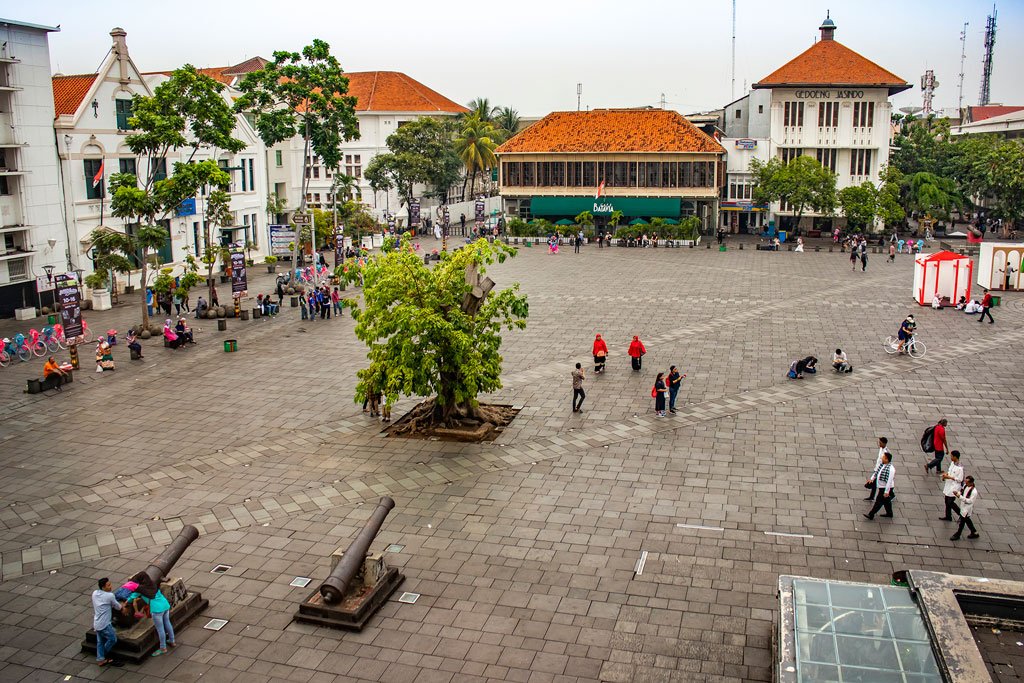 The historic old part of Batavia, Fatahillah Square, with Cafe Batavia in the background 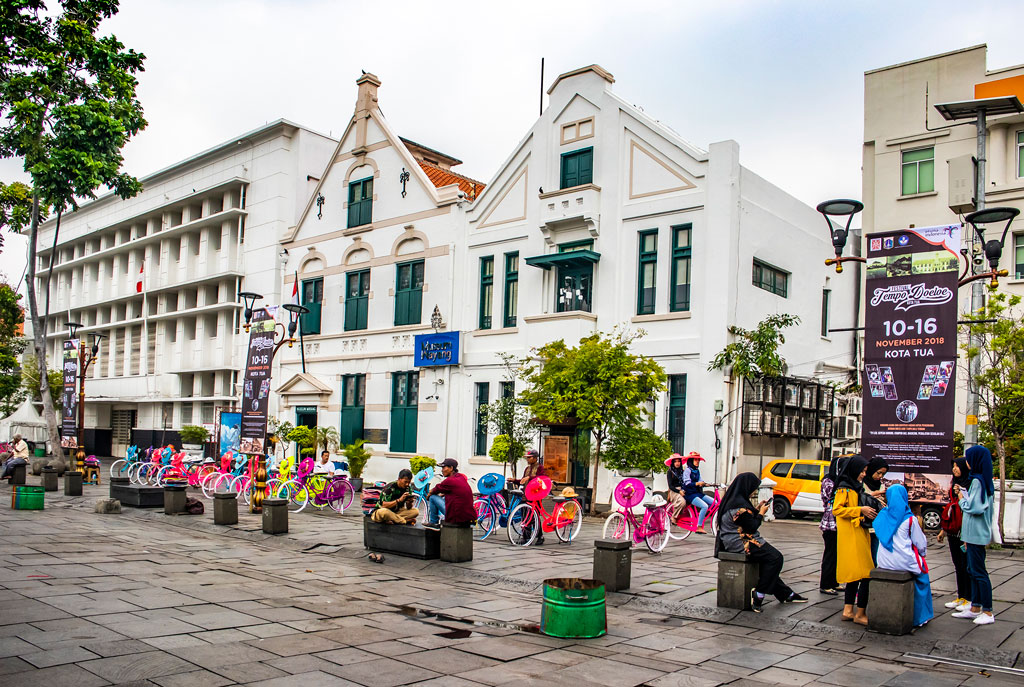 The Wayang Museum on Fatahillah Square, with its distinctive Dutch gables, stands on the site of the old Dutch Reformed Church 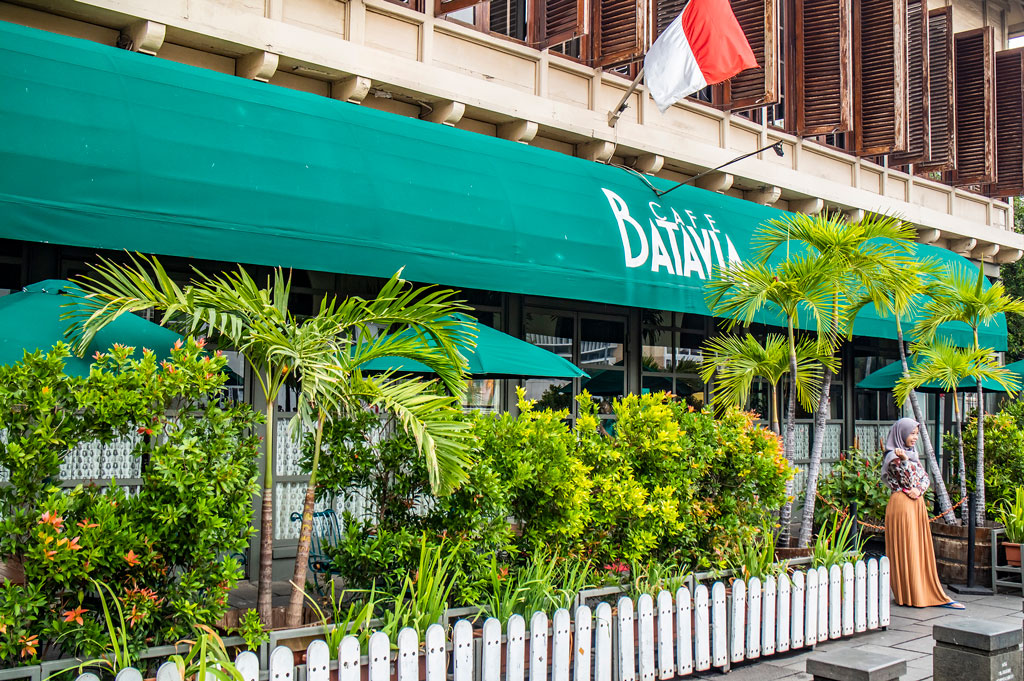 At school we were taught the Dutch East India Company (Vereenigde Oost-Indische Compagnie – VOC) established a victualling station on the southern point of Africa in 1652.  It was meant to provide their ships with fresh supplies on the long sea voyage between Amsterdam and Batavia – akin to a ‘roadside stall’ for ships. 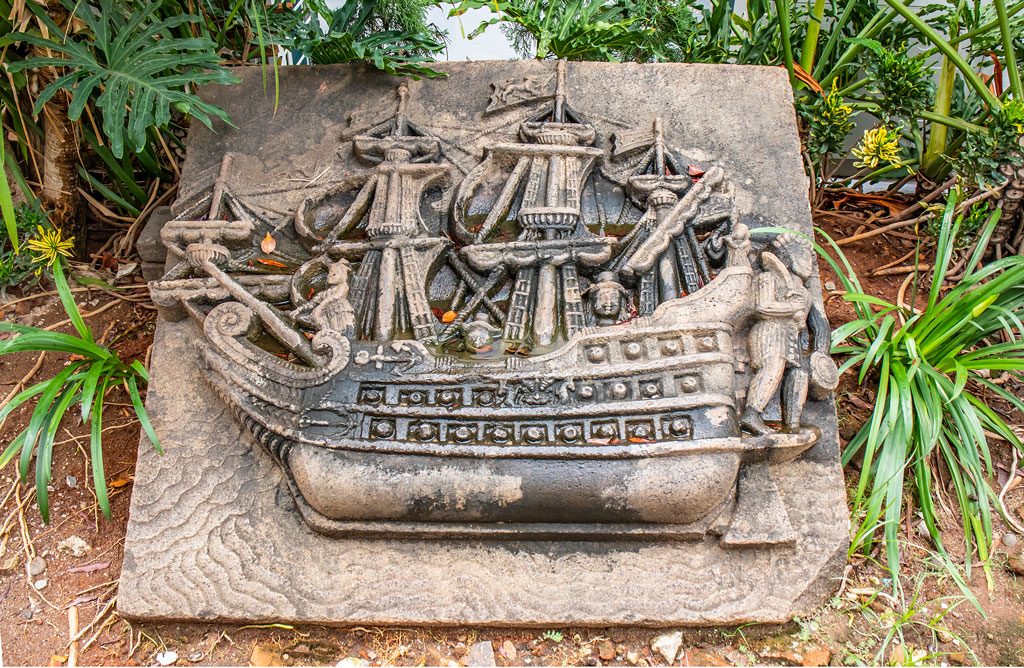 Spices were a major driver for seafarers to sail into the unknown, explains John Keay in his book ‘The Spice Route’.  For centuries spices were used in food, drink and medicine without anyone really knowing where they originated.  The realisation that cloves, cinnamon and pepper were growing on a number of small volcanic islands in the mystical tropical East, unleashed a veritable mad scramble.  Myristica fragans (nutmeg) from the distant Banda Islands was especially sought-after;  profits in the tens of thousand per cent were made in Amsterdam.

Ever since Vasco da Gama “discovered” the route around the Cape to India in 1499,  Portugal and later England and the Netherlands were constantly at war to obtain these valuable spices.  In the process the indigenous population was brutalised:  their leaders exiled or executed, blood spilled, thousands of slaves taken.

When walking through Jakarta nowadays, one sees our people;  the same people one encounters in the Bo-Kaap in Cape Town.  Their ancestors were brought from Indonesia and surrounds to the Cape, often forcibly.  Fortunately they left a rich cultural heritage:  tasty cuisine, language, fine dress, spiritual devotion. 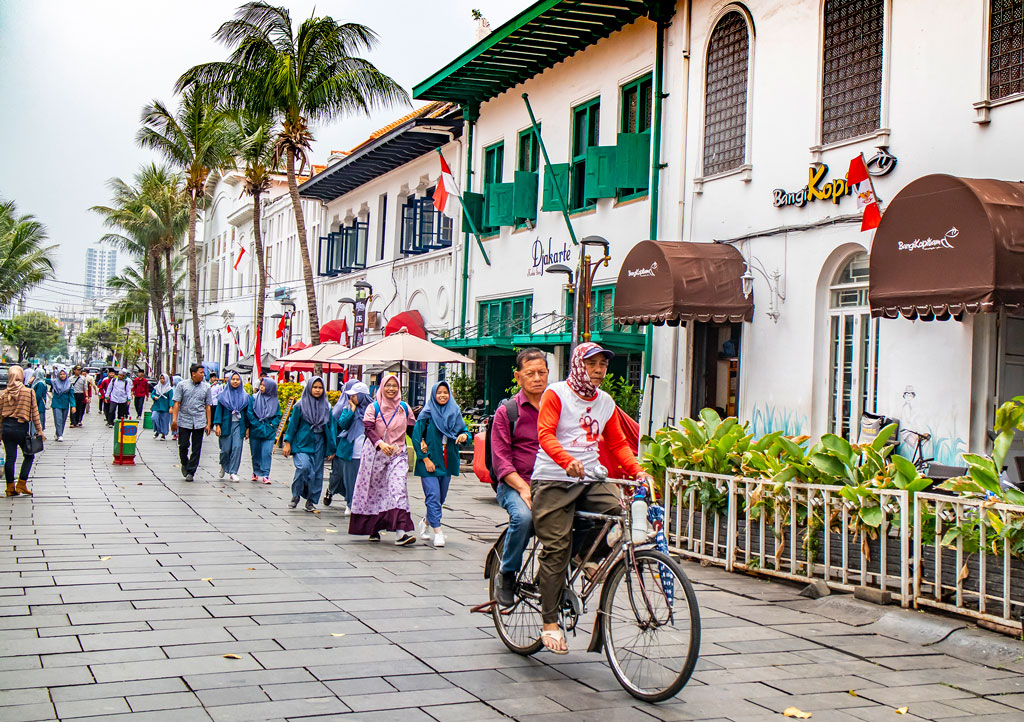 Bicycle taxis are convenient for the tired tourist 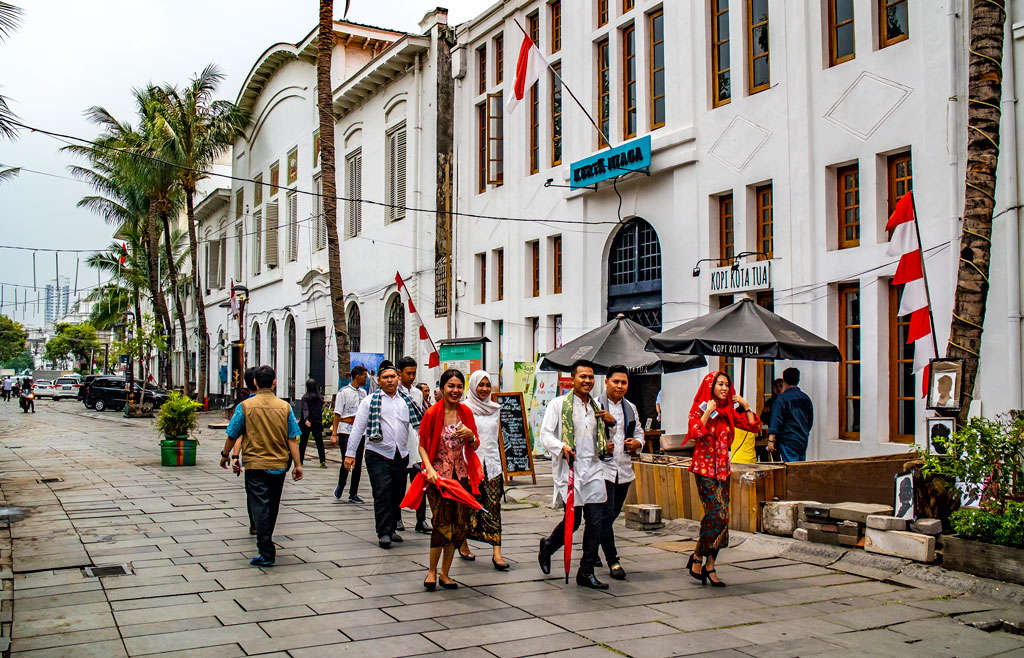 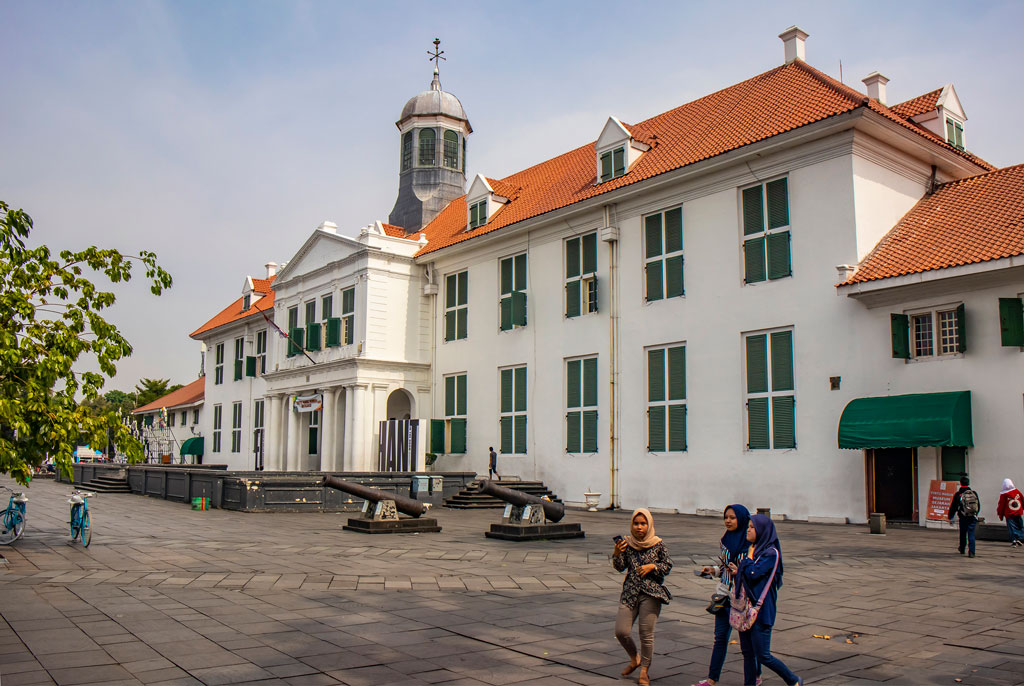 In the old Stadhuis, nowadays the Jakarta History Museum, I notice the ‘gantang’, a measure  for rice or other dry goods.  At the Cape ‘gantang’ denoted a man’s beloved;  as in songwriter Anton Goosen’s popular ‘Jantjie’ where the choir sings:  “My ghantang van die Onderkaap…” (My ghantang of the Lower Cape). 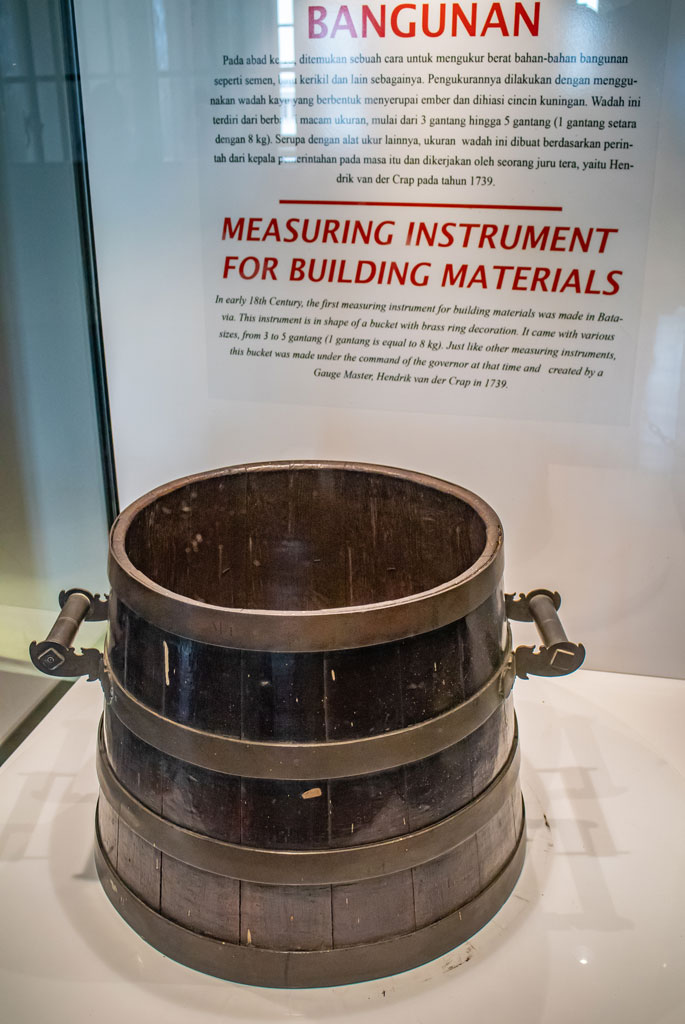 The gantang dry-goods measure displayed in the Jakarta History Museum 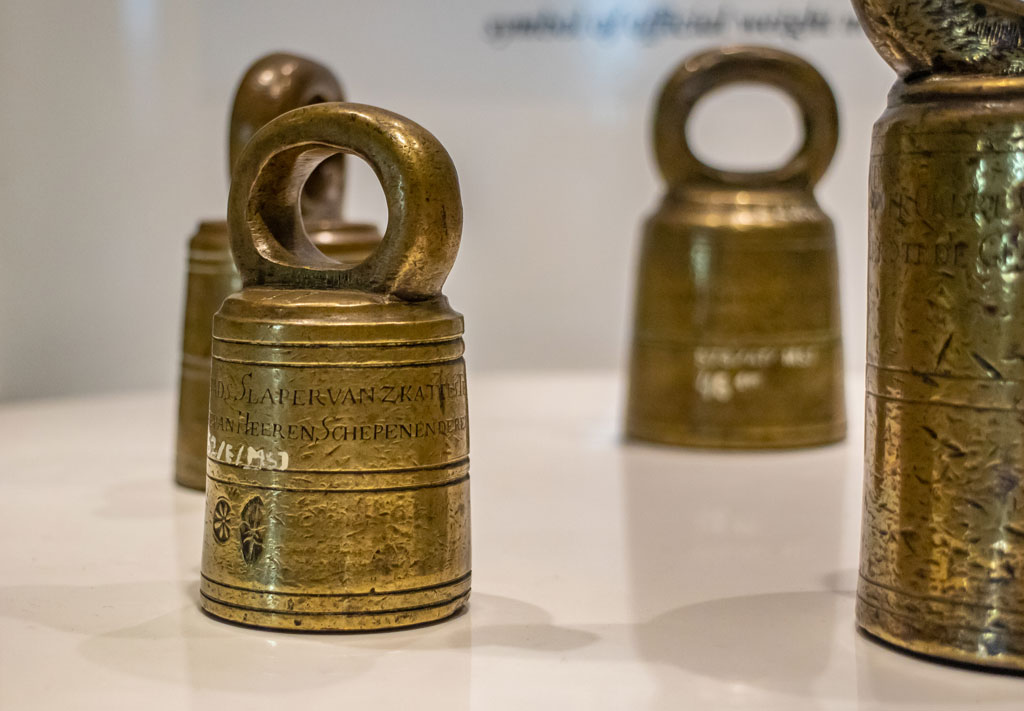 Different sized weights from the VOC era in the museum 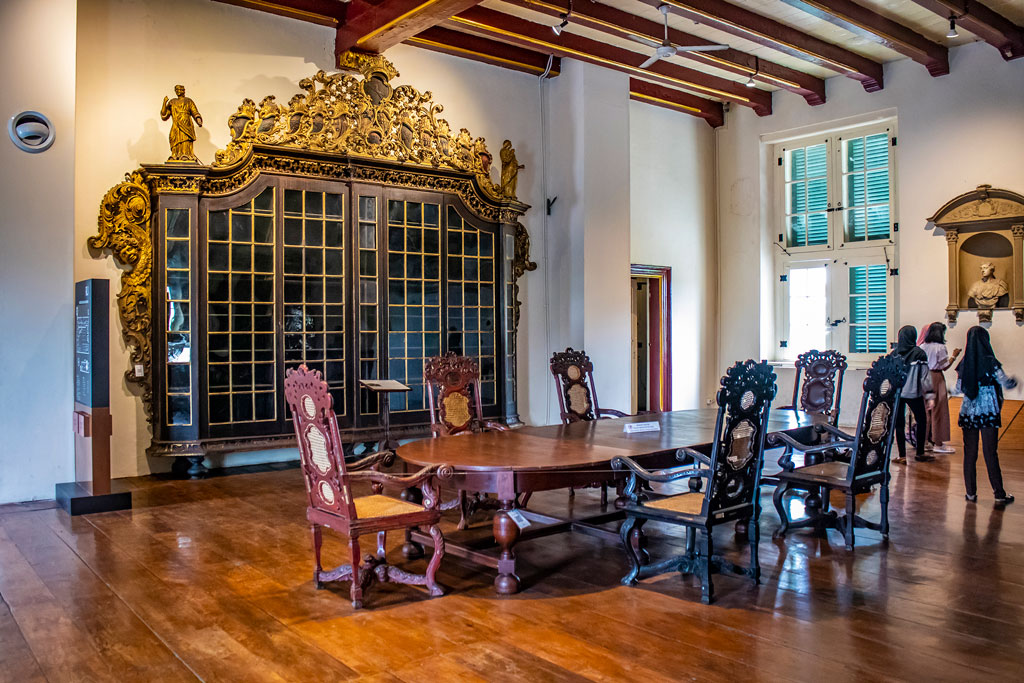 Elaborate furniture from the VOC period in the Jakarta History Museum

The history, specially Jakarta’s – often quite violent – is comprehensively depicted in the museum on Fatahillah Square.  There is ancient weaponry, like the Portuguese Si Jagur cannon with its naughty symbolism, even stone tools from the prehistoric era. 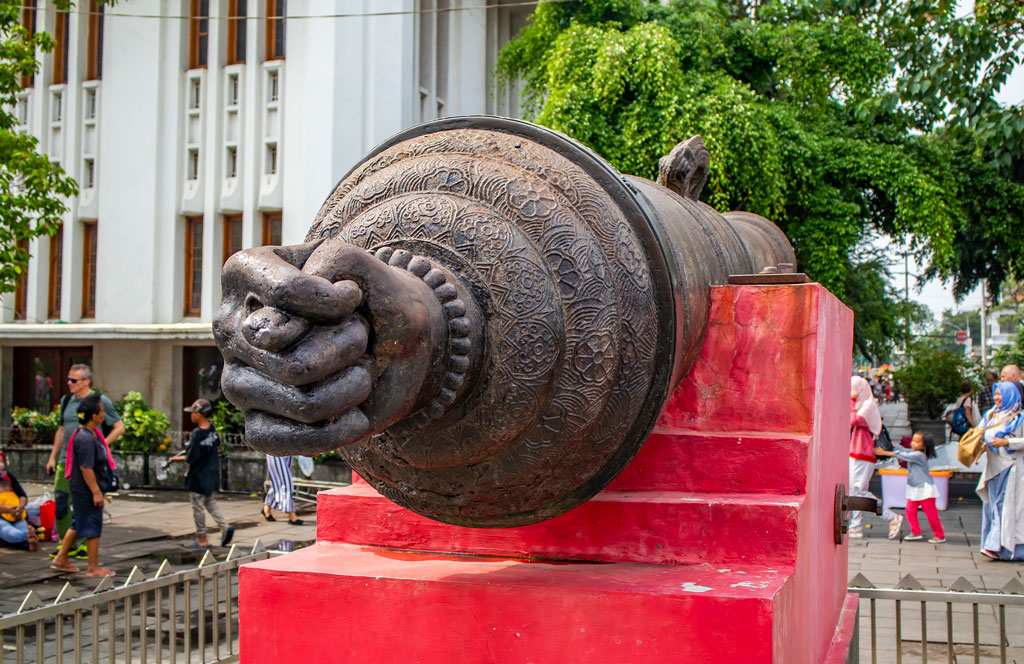 While Indonesia’s relationship with colonial Holland was initially fraught after independence in 1949, the VOC era is well represented in paintings, artefacts and especially elaborate furniture.  All captions are in English and Bahasa Indonesia.  In the original entrance hallway is a large wooden panel indicating that Governor-General Abraham van Riebeeck officially opened the Stadhuis in 1710.  (He was the son of Jan van Riebeeck – he of the 1652 halfway station at the Cape.  Jan died in Batavia on 18 January 1677). 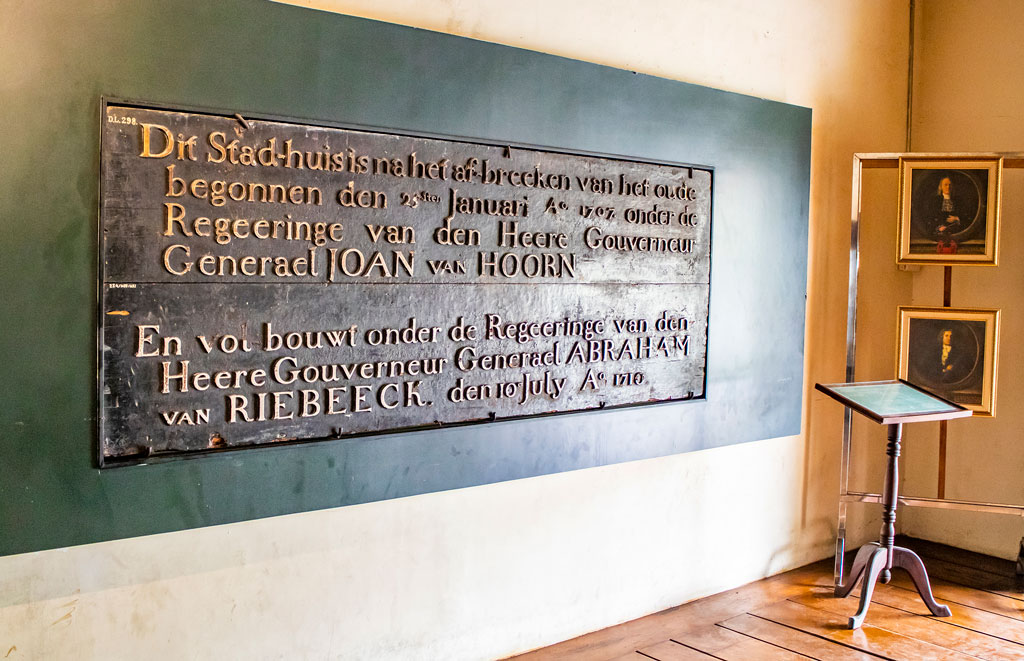 Wooden sign board, indicating that the Stadhuis was completed under Governor General Abraham van Riebeeck in 1710 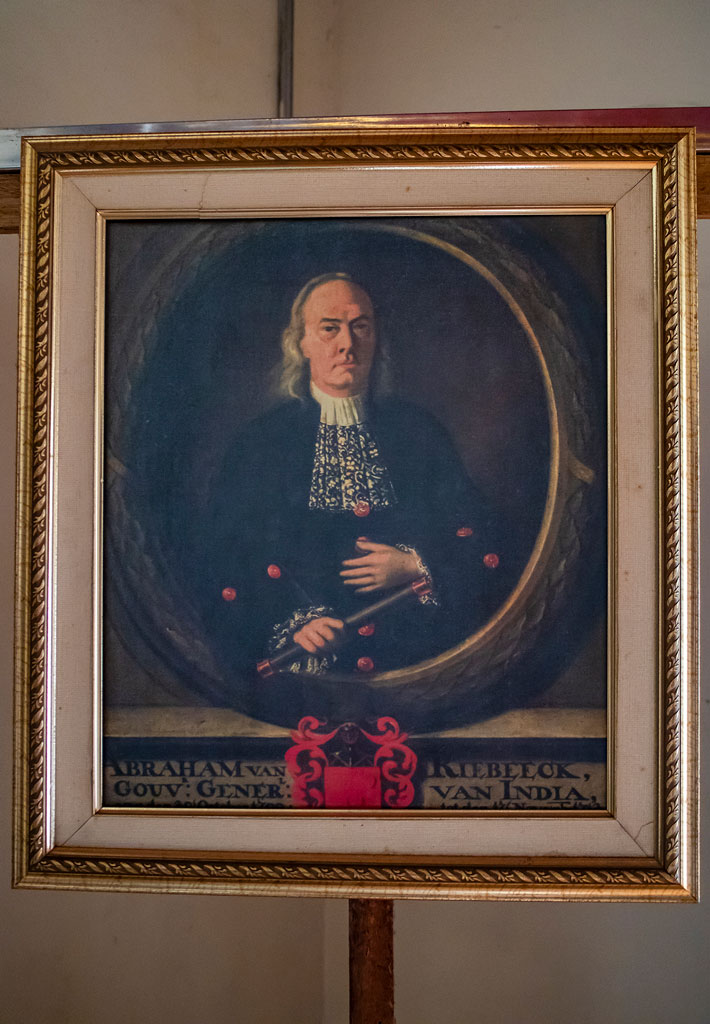 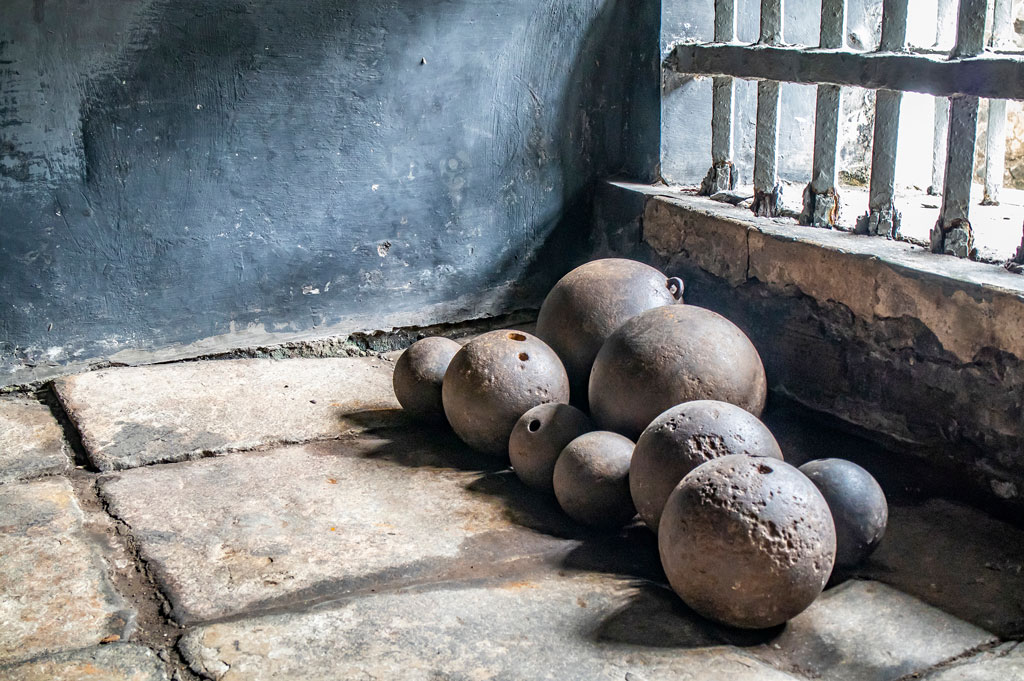 Iron cannon balls to which prisoners were chained under the Stadhuis 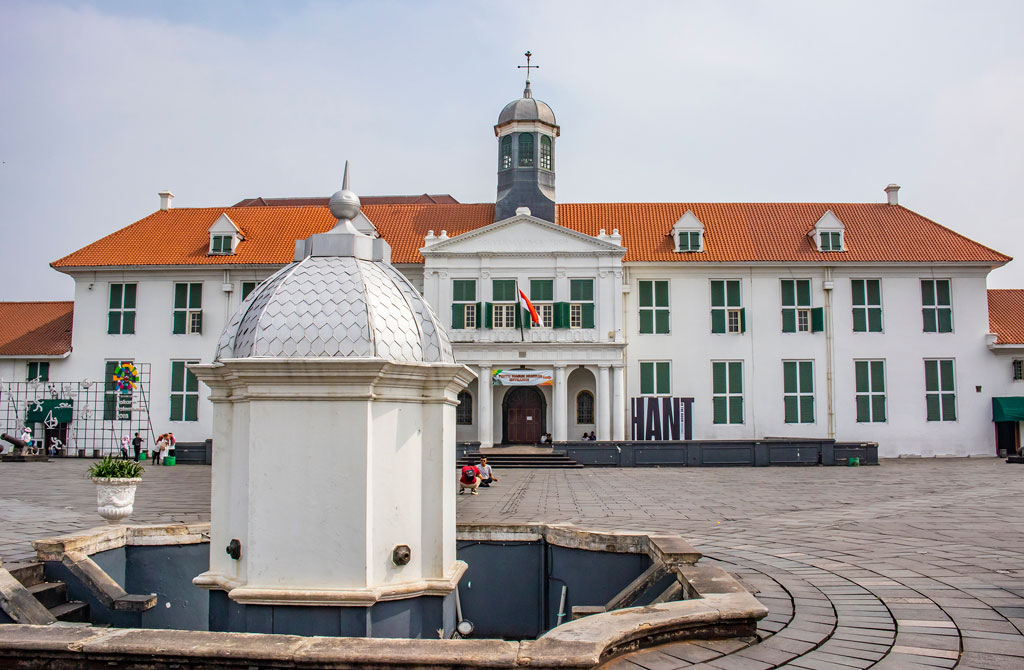 Near the old Stadhuis used to be a fort, very much like the Castle in Cape Town, supposedly to protect Batavia.  It no longer exists but next to the old Sunda Kelapa port with its impressive Bugis Pinisi schooners (traditional boats from Makassar) is the Maritime Museum in the old VOC grain storehouses.  Find something to eat at the VOC Restaurant and check out the remnants of the city walls still standing there. 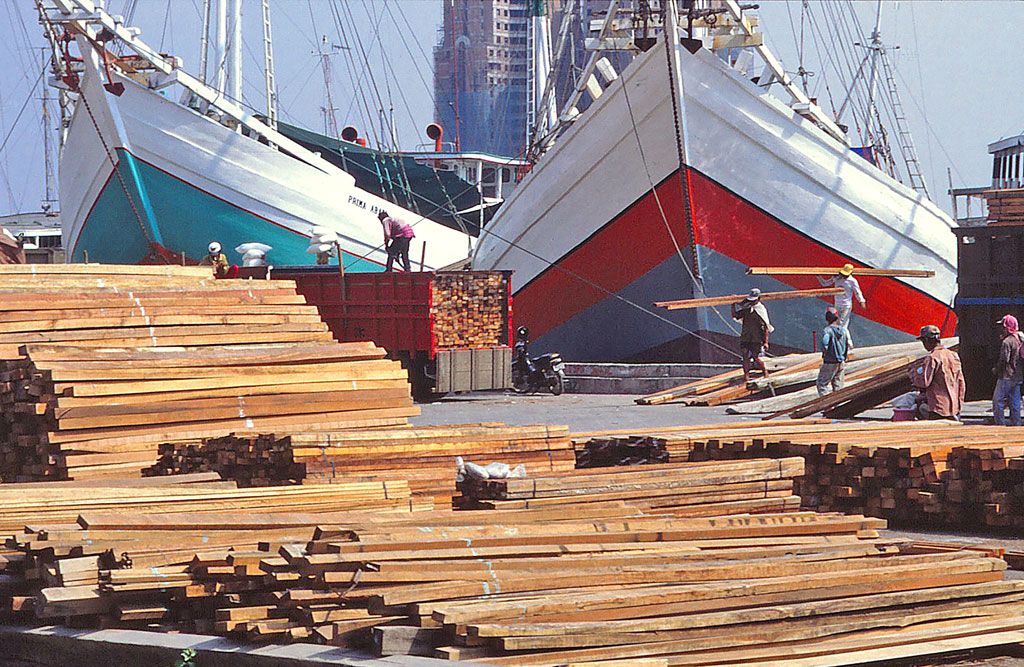 This part of Batavia eventually became unbearable due to malaria outbreaks, prompting the high officials of the VOC to relocate further south;  to spacious areas called Rijswijk, Harmonie en Weltevrede.

Weltevrede (well contented) is how I would describe my experience of Jakarta – Batavia of old.  Terima Kasih! 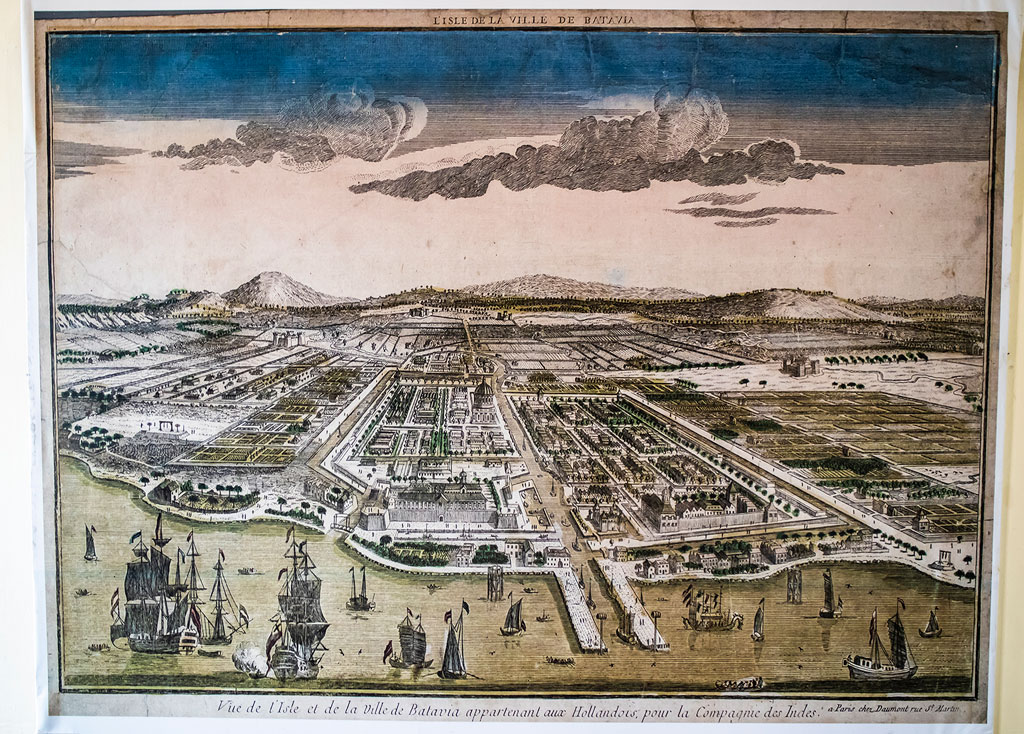 Illustration of old Batavia on display in the Jakarta History Museum

Postscript:  In order to get their hands on all of the Spice Islands, the Dutch ceded their lands in America to England under the 1667 Treaty of Breda.  This is how Nieuw-Amsterdam became New York.

Know this before going:

A moderne fast train now runs from the Hatta Soekarno lnternational Airport to the city centre, which saves a lot of journey time.

This article, in slightly edited form, was published as a double-page spread in the South African Sunday newspaper RAPPORT’s travel section on 13 January 2019, under the title “Feel welcome in ‘familiar’ Djakarta…”  It was written in Afrikaans, the South African language with its roots in 17th century Dutch. 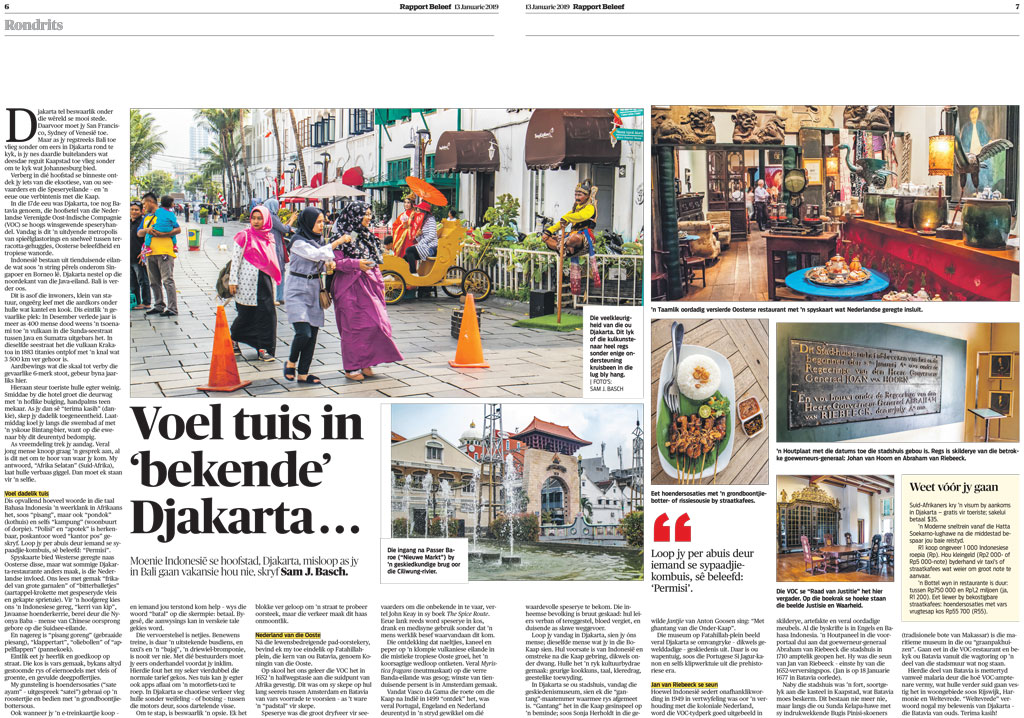