Before setting out on a road trip, I have the habit of studying the map of our intended route.  Every so often I might spot something interesting:  a marker to a monument or a battlefield or the remnants of an old structure.

These odd bits of history mostly have little relation to each other, nor have I been looking for any of them.

I call them stepping stones in history.

Some are vaguely familiar.  But more often than not I know little or nothing.  But since they’re just there, why not make a brief stop to learn something new?

On a recent trip the road atlas showed a marker ‘First gold refinery’, just off the main road heading north to the town of Polokwane. 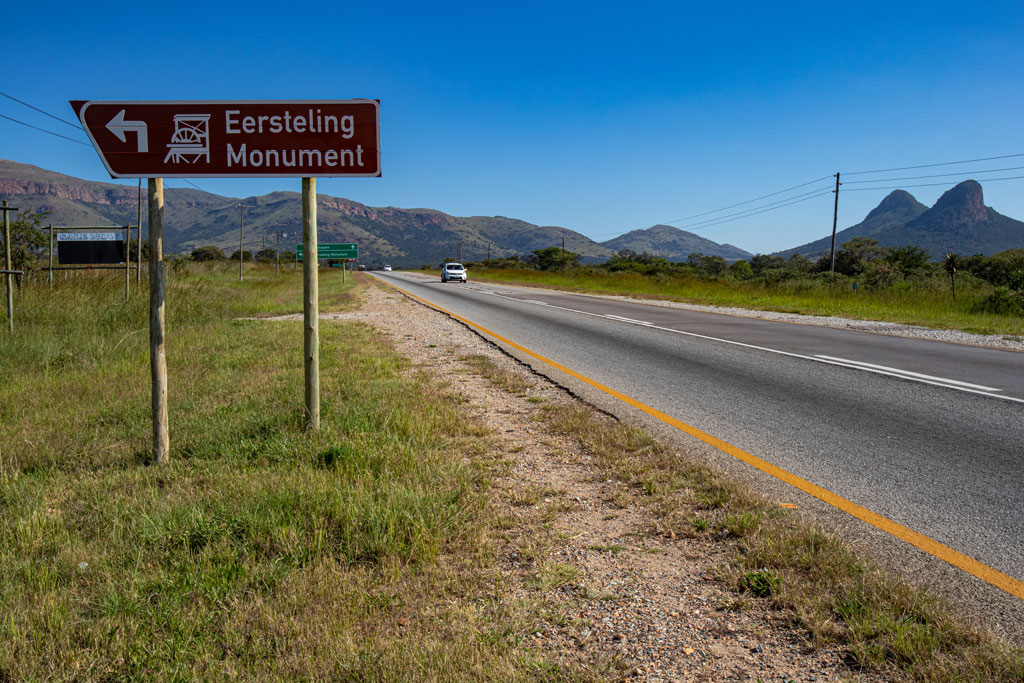 Gold mining this far north?  Having grown up on a gold mine near Johannesburg, I was intrigued.

Massive gold deposits where Johannesburg was founded in 1886 led to the world’s largest gold rush ever.  But here, hundreds of kilometres north of Johannesburg?

We turned off at a signpost reading ‘Eersteling’ (roughly translated as ‘Firstling’), where in 1870 a prospector Edward Button discovered a goldfield.  He bought the farm in 1871 for £50 and having informed the government in Pretoria, the Marabastad Public Gold Diggings were declared.  Button and his partner raised £50,000 in England to form the Transvaal Gold Mining Company Limited –South Africa’s very first gold mining company.

I later came across an article on the web by Dr Joost Heystek that includes sketches by the renowned explorer and artist Thomas Baines, made during his visit to Eersteling in December 1871.

Baines also painted a scene where the gold-bearing quartz was crushed by means of a huge boulder.  A long pole attached to the top of the boulder allowed two workers to ride see-saw on it, a rudimentary crusher.  (The stone is now on display at the Ditsong National Museum of Natural History in Pretoria.)

By all accounts, this was dangerous work and hardly an economical way to extract gold.  It prompted Button to buy a 12-stamp battery and boiler in Britain, for which he built a tall chimney-stack – which is all that remained of his gold mining operation at Eersteling. 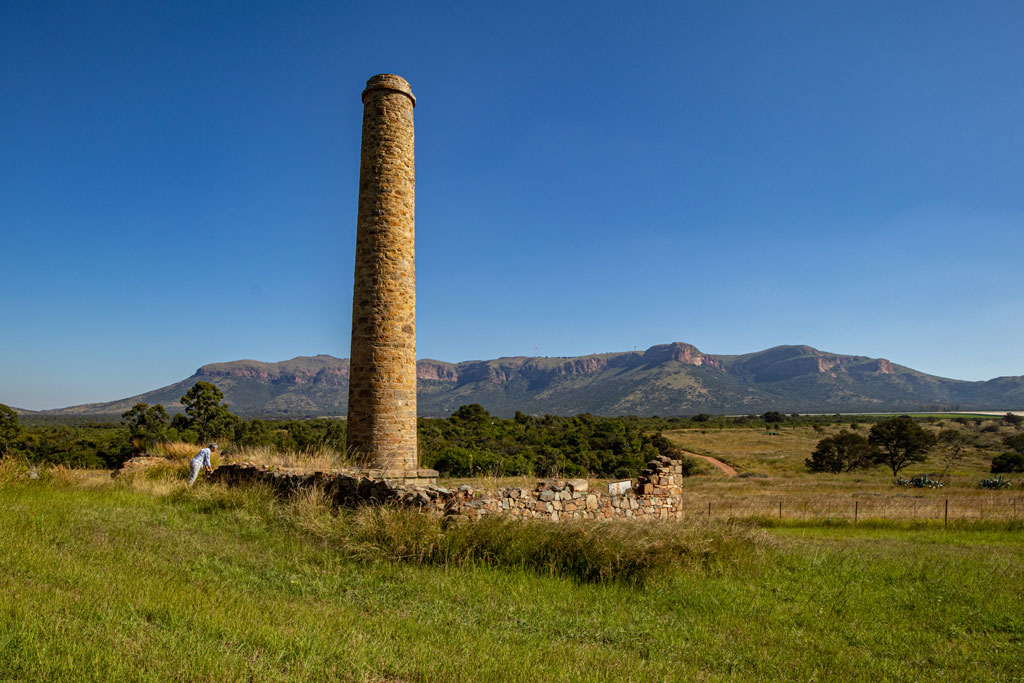 Although the mine was producing more than 10,000 ounces of gold by 1875, prospecting eventually moved to the east of the country where alluvial gold was discovered at Pilgrim’s Rest and in the mountains around Barberton in present-day Mpumalanga province.

The Eersteling mine was declared a national heritage site in 1938.

One of the first tourist camps in the Kruger National Park, along with the Punda Maria rest camp in the north, Shingwedzi still offers accommodation in thatched cottages dating from 1933.

Whilst this fact is not indicated on our road atlas, we read about it in several travel guides.  Interestingly, it is said early gold diggers panned for the precious metal near here but found nothing. 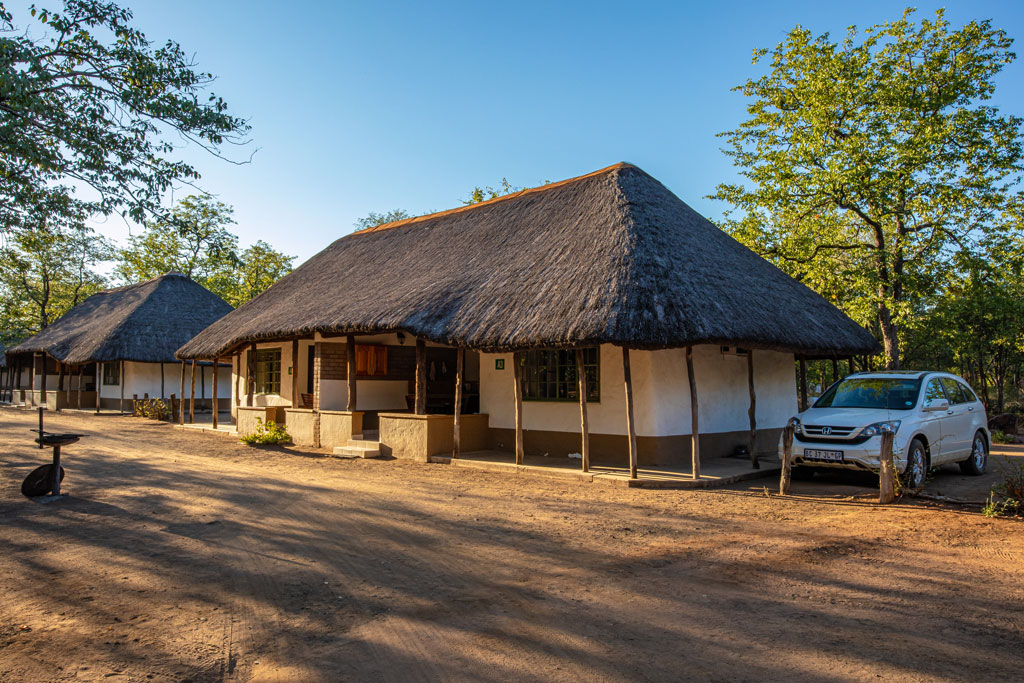 All tourist huts in Shingwedzi have been modernised and some replaced entirely, especially after severe damage caused by floods in 2013.  The most modern ones are also thatched, but we prefer the original huts in A-circle with whitewashed wattle-and-daub outer walls and the thatch overhang supported by leadwood posts.  These huts are in very similar style to those at Punda Maria rest camp further north.

Not knowing very much about architectural design and technique at all, I was nevertheless impressed by the construction of the huts, especially the thatching in the roofs. 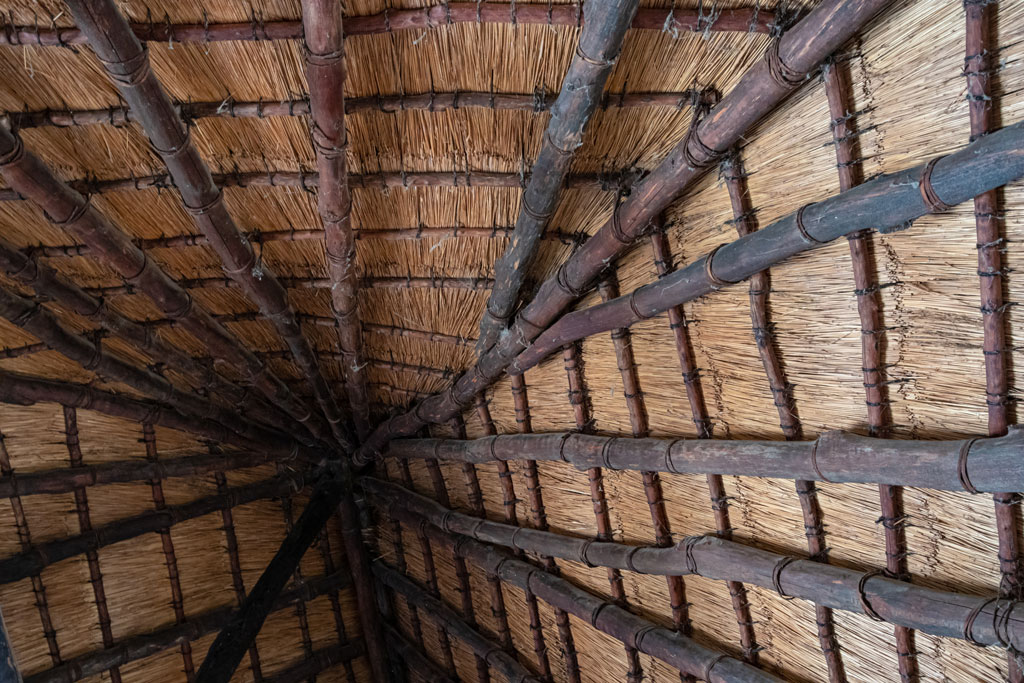 With the roof resting on rough-hewn horizontal beams, it appeared to be kept in position with wooden pegs or dowels.  Looking up into the rafters, it seemed rawhide trussing was used to secure the thatch on to the internal lattice structure.

Wooden pegs or dowels seem to hold the roof in posision 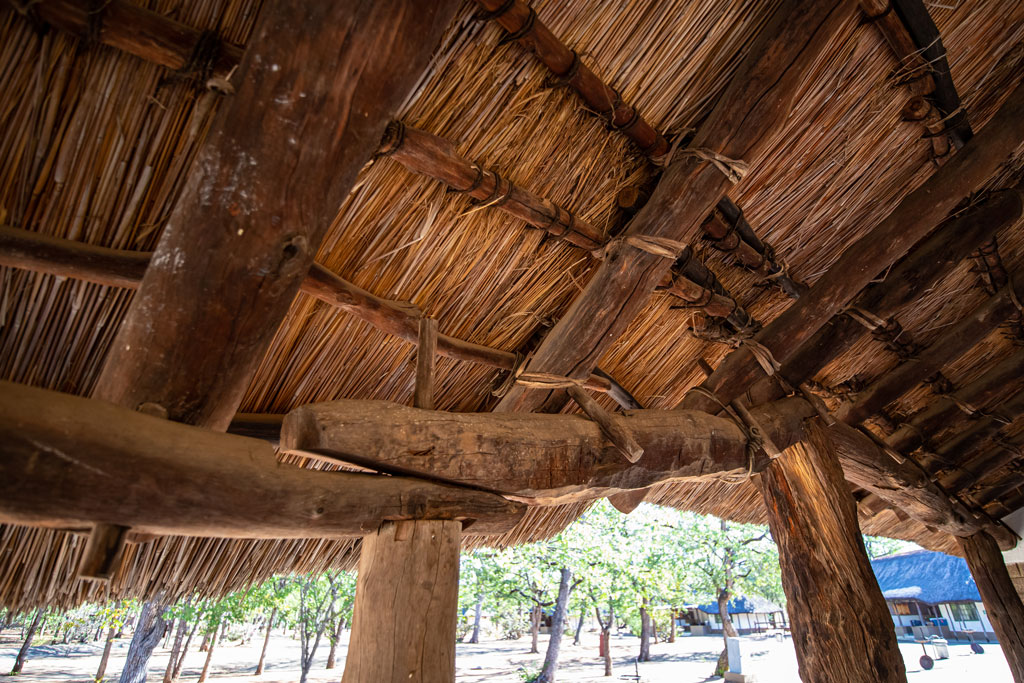 Romantic as this may seem, today we have the advantage of modern amenities in the camps.  Recall that the early visitors to the Kruger National Park often lacked hot ablutions, this being considered a “luxury” by the park authorities.  They only agreed to provide hot baths with some reluctance in the mid-1930s provided tourists pay one shilling per bath! 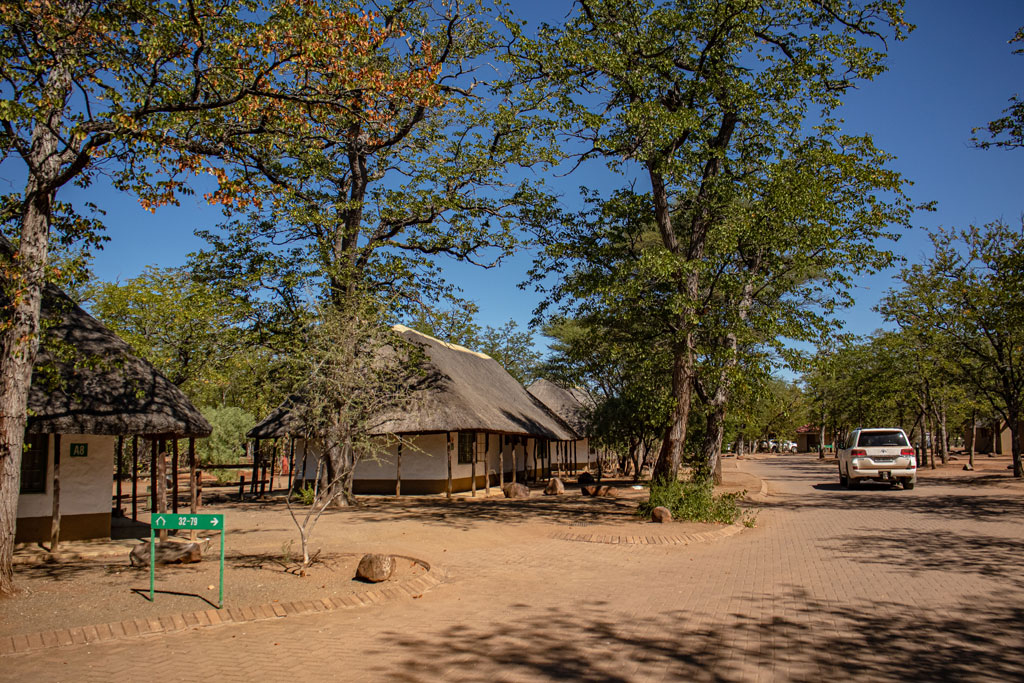 The older thatched cottages in A-Circle, left, have been modernised

A giant came crashing down:

Baobab trees (Adansonia digitata) are native to Africa, including Madagascar, Australia and parts of Arabia, with nine species known.

One of the largest in circumference at 47m was the well-known Sunland Baobab (also called the Big Baobab), a popular tourist attraction on Sunland Farm near Modjadjiskloof in South Africa’s Limpopo province.  On August 2016 a large part of the 22m high tree crashed to the ground.  A year later, in April 2017 a further portion collapsed, destroying a pub that the owners had installed inside the hollow trunk.  Hollowing of the trunk seems to be a natural occurrence attributed to age. 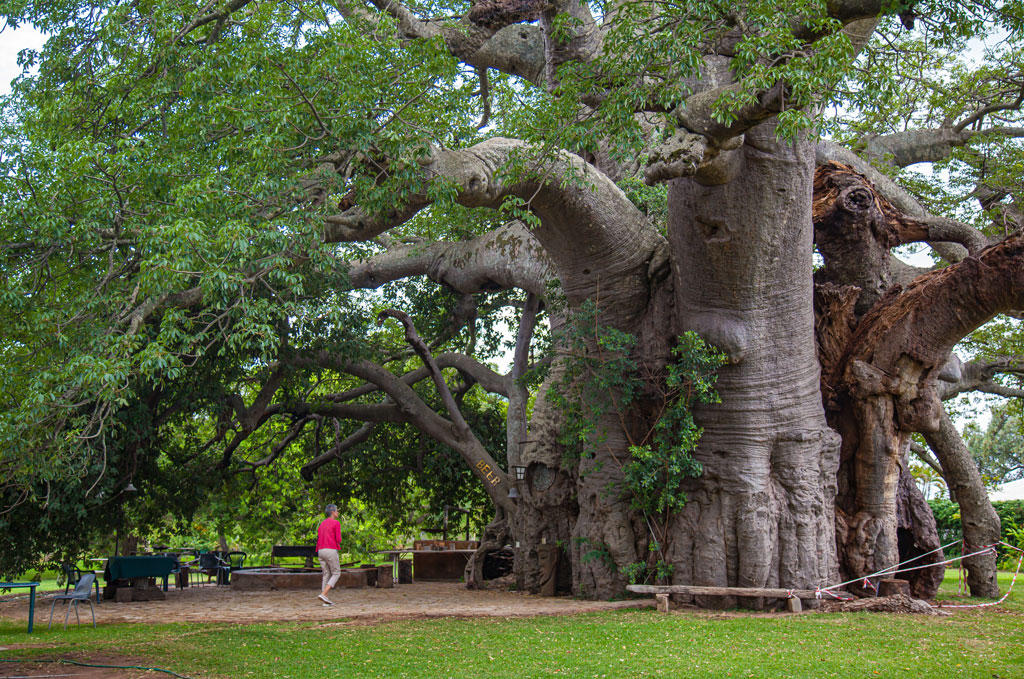 Estimates for the Big Baobab’s age range from 1,700 to 6,000 years, making it arguably the oldest in the world.

Interestingly, the collapsed portion has been dated as “only” 850 years old.  Baobabs lack growth rings, which are a measure of age.  This leaves scientists with the use of radiocarbon-dating to calculate their age.

Owners Doug and Heather van Heerden intend leaving the tree where it fell in the hope that it would regrow as it has apparently done 850 years ago.

“The older side of the tree is still standing and still looks magical.  That wood is radiocarbon-dated to be 1,700 years old, and we are hoping that the fallen stems will root themselves,” Heather van Heerden told the local Letaba Herald newspaper.

According to news reports, seven out of 10 giant baobabs in Africa have collapsed in the past number of years.  Many scientists attribute this phenomenon to climate change.

The leaves, bark and fruit of these trees have many uses.  In the Afrikaans language the Baobab is called “Kremetartboom” (cream of tartar tree), as the white powder in the fruit was mistaken for cream of tartar.  The trunk is soft, storing vast quantities of moisture, which elephants have seen to consume. 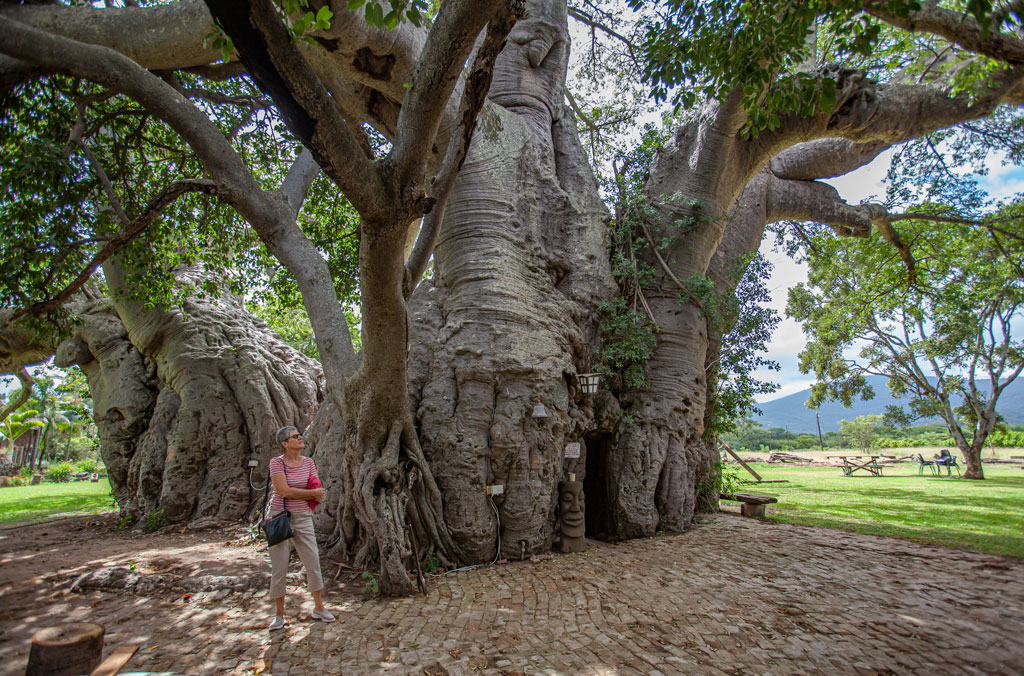 We were fortunate to see the giant when it was still intact, though with signs that all was not well.  That was on 18 April 2016, mere months before the first major split.  My photographs remain as a record of this great attraction.

Train in the street:

One of the toughest equestrian events anywhere takes place in the town of Fauresmith in South Africa’s Free State province.  The annual Fauresmith International Endurance Race attracts hundreds of entries from around the world.  As Chris Marais and Julienne du Toit wrote on their Karoospace blog:  “If you’re not a fully-blooded endurance rider, then come as a spectator.” 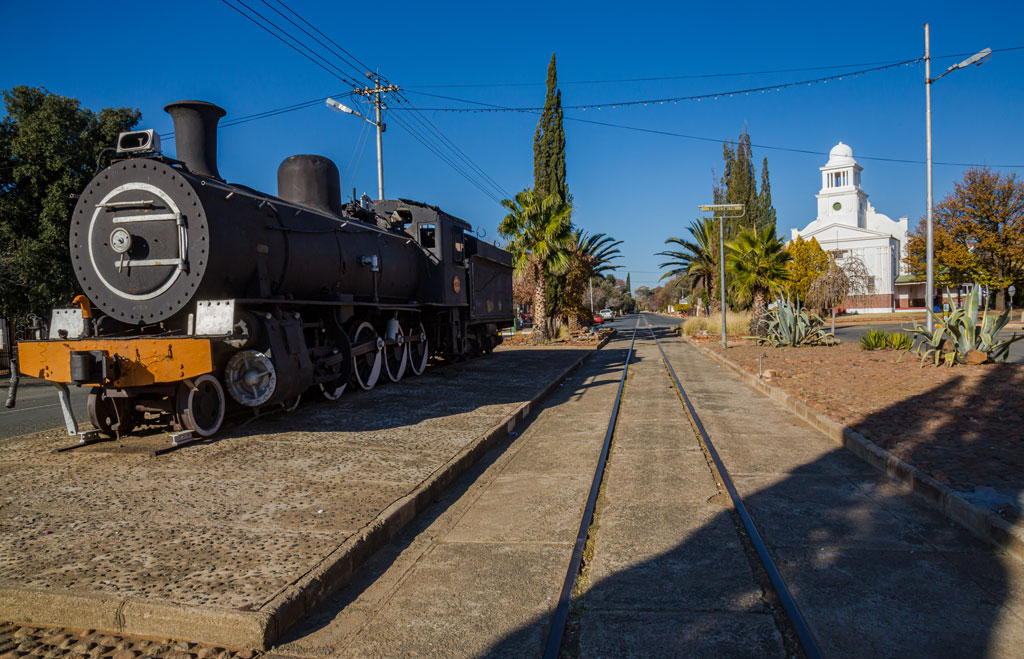 The steam train used to run down Fauresmith’s main street

But our visit there was for another reason:  Fauresmith  is apparently one of only three places in the world where the train used to come into town, travelling down the main street.  The other two are Tullahoma in Tennessee in the United States of America and Wycheproof in Australia’s state of Victoria.

The railway line is still there, but trains no longer run on it.  However, for old times’ sake a steam engine was installed in front of the town’s Victorian-style townhall.  Last time I was there, the grand old lady seemed in need of some tender loving care.  After all, this once proud South African Railways Class 8BW No. 1153, wheel type 4-8-0she was built by North British Locomotive Company in 1903 – according to an online source. 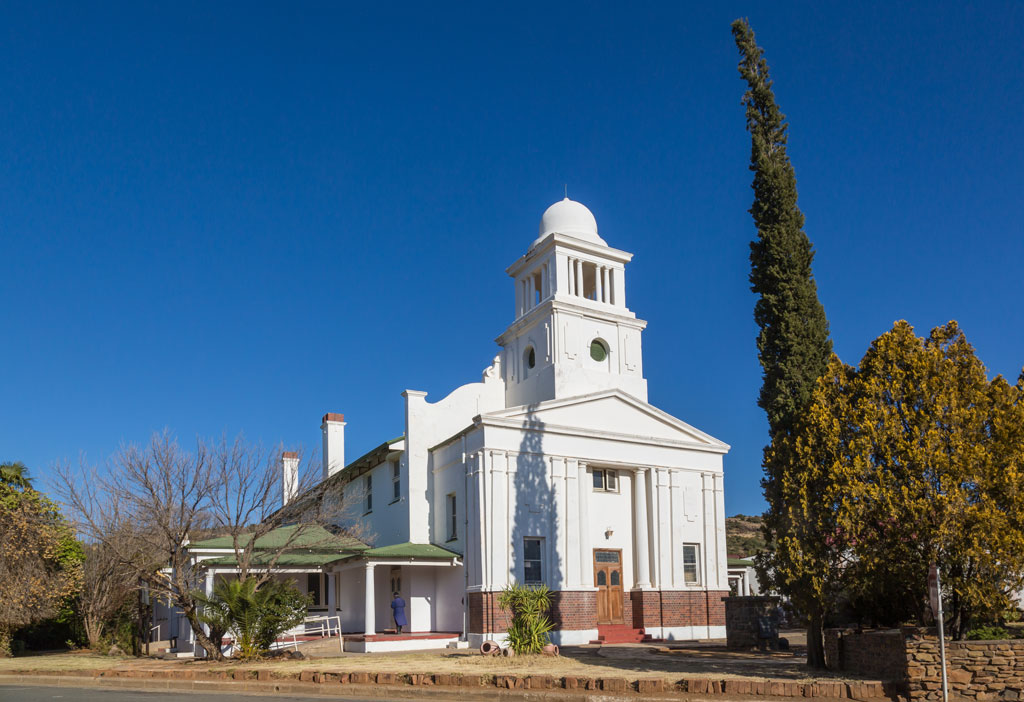 The Victorian-style town hall in Fauresmith

The town got its name from the Reverend Philip Faure and British colonial governor Sir Harry Smith (more about him later).  Interestingly, the surname Faure is an Occitan (southern French) family name meaning blacksmith, which is also the root for the English surname Smith.

Down a lane of stately trees on the historic Irene farm outside Pretoria we came upon a South African Air Force memorial.  It honoured two airmen who had lost their lives in what is described as the first recorded fatal military aircraft crash in South Africa. 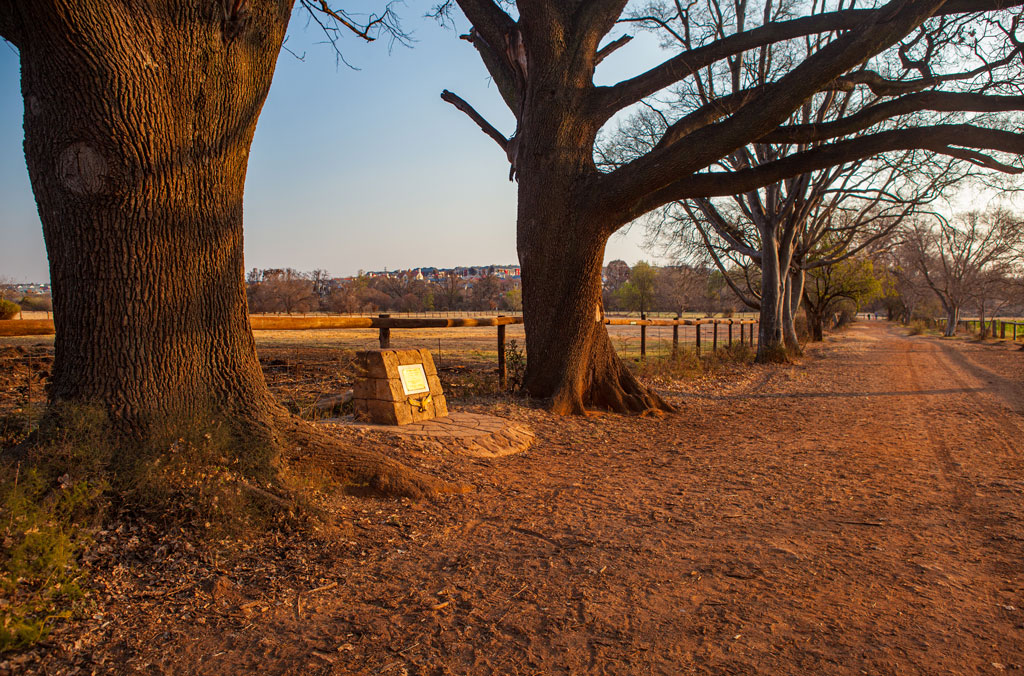 According to the plaque Capt Laurence van der Byl and Lt E Stewart died when their Avro biplane crashed on this site on 18 September 1922. 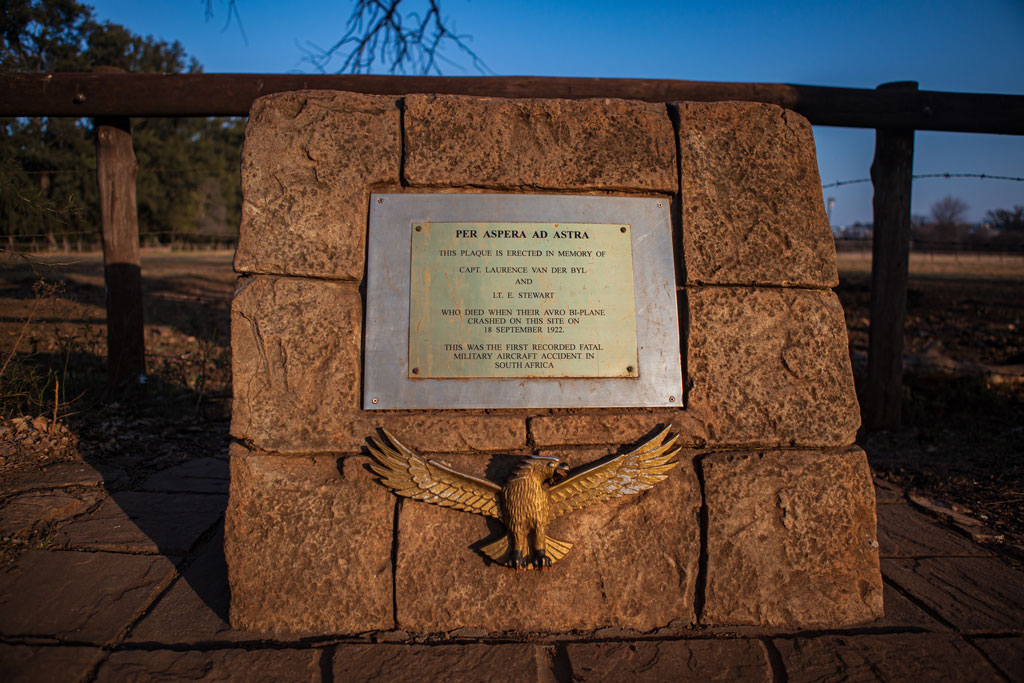 Further research showed Captain Van der Byl to be Albert Lawrence Montague van der Byl who was born in Venice, Italy, in around 1893.  I could not find any further information on his co-pilot Stewart.

The Irene farm is still owned by the Van der Byl family, now in the fifth generation’s hands.

In time I’ll find other interesting stepping stones and will record them here.