Exactly 75 years ago last month, 200 air force men were anxiously waiting in Hut 104 of the Stalag Luft III prisoner of war camp in Nazi-Germany to escape through a tunnel.  This was the start of ‘The Great Escape’ that was to play out during the night of 24/25 March 1944. 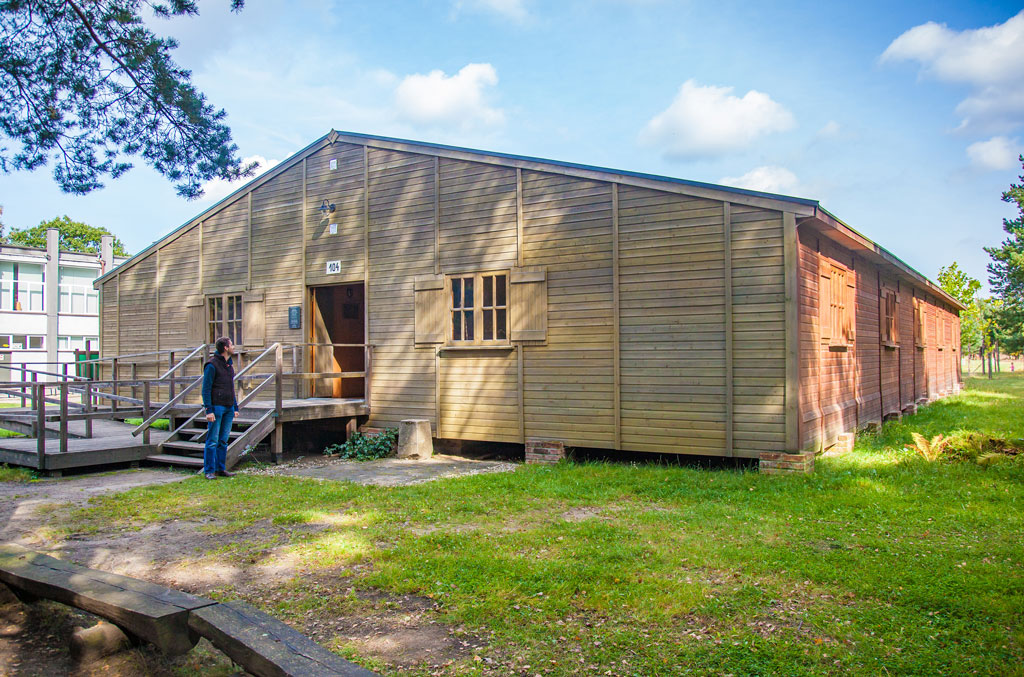 A half-scale replica of Hut 104 at the Stalag Luft III Museum near Żagań, Poland

What few people in South Africa probably know is that the driving force behind this daring effort was South African-born Squadron Leader (Major) Roger Bushell of the Royal Air Force (RAF).  (This was due to domestic politics in post-war South Africa that kept quiet – probably deliberately – about the war-time contributions of our soldiers).  Among those who escaped were three other South Africans.

Many of us remember the 1963 film with Richard Attenborough, Steve McQueen and Charles Bronson in the cast.  Typical Hollywood, many facts were twisted to suit American preferences. 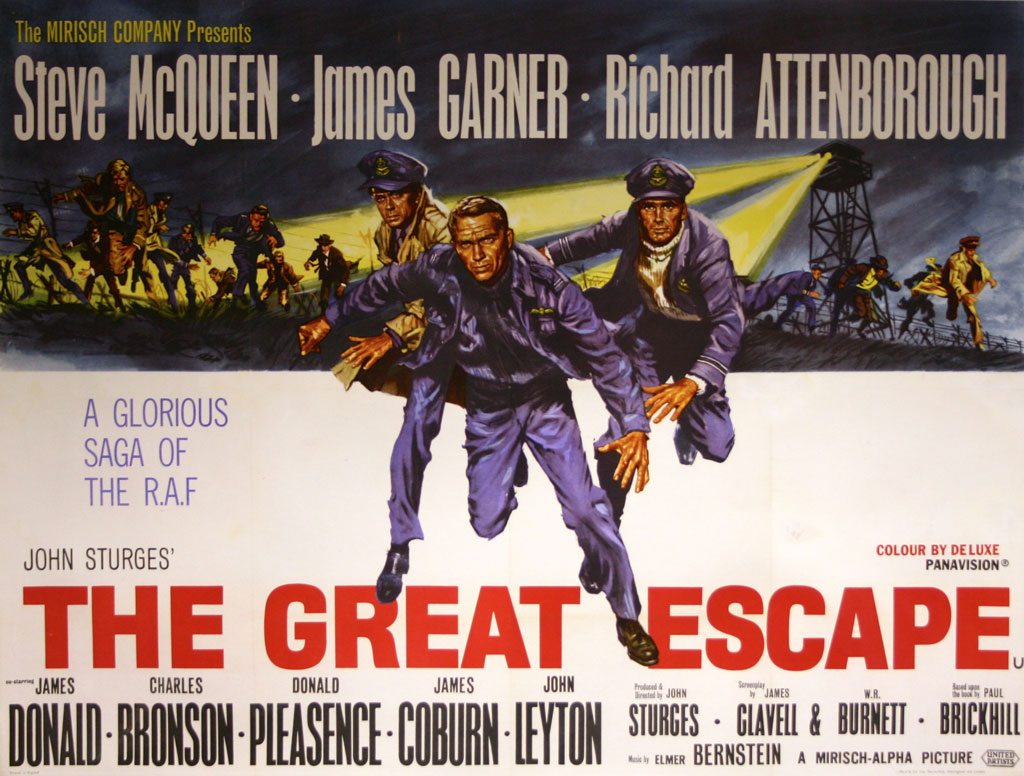 Roger Bushell (33), portrayed in the film by Attenborough, was born in Springs, a gold mining town east of Johannesburg where his engineer father held the position of general manager of the Daggafontein mine.   “Aristocracy” is how Nobel Price winner and author Nadine Gordimer – herself Springs-born – once described the Bushells.

At 13 Roger gets accepted at the prestigious Wellington College in Berkshire, England.  During his law studies at Cambridge he moves in aristocratic circles and excels in sport, notably cricket and ski.  One among his many friends is Lady Georgiana (Georgi) Curzon, who would anxiously wait for Roger’s return from the war. 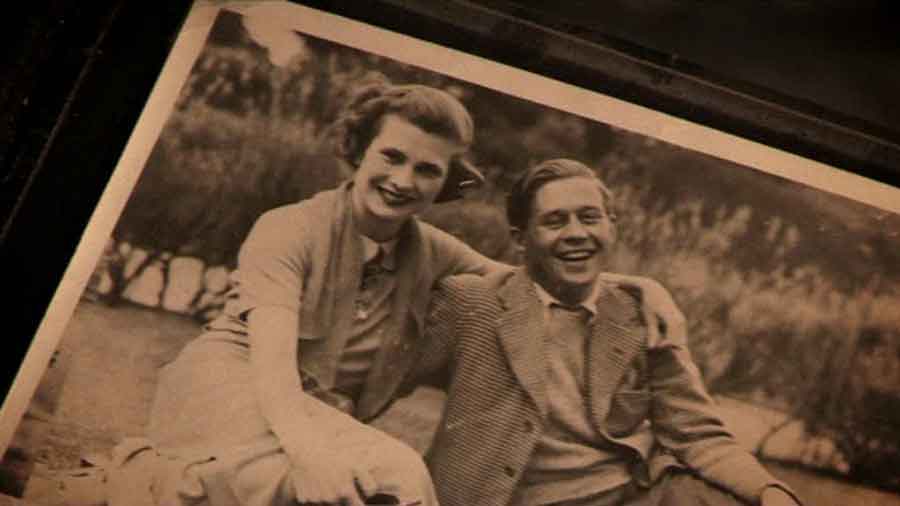 Shortly after taking command of 92 Squadron RAF, his SuperMarine Spitfire fighter plane got shot down over France on his first sortie. 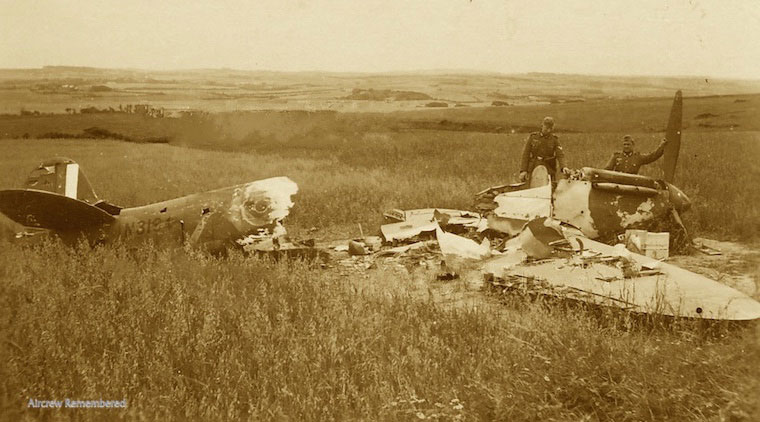 He escapes twice from POW camps before being sent to Stalag Luft III in 1942.  According to Luftwaffe chief Hermann Goering this new camp in Silesia, south-east Germany at Sagan (nowadays Żagań in Poland) was “escape free”.  He would soon prove wrong. 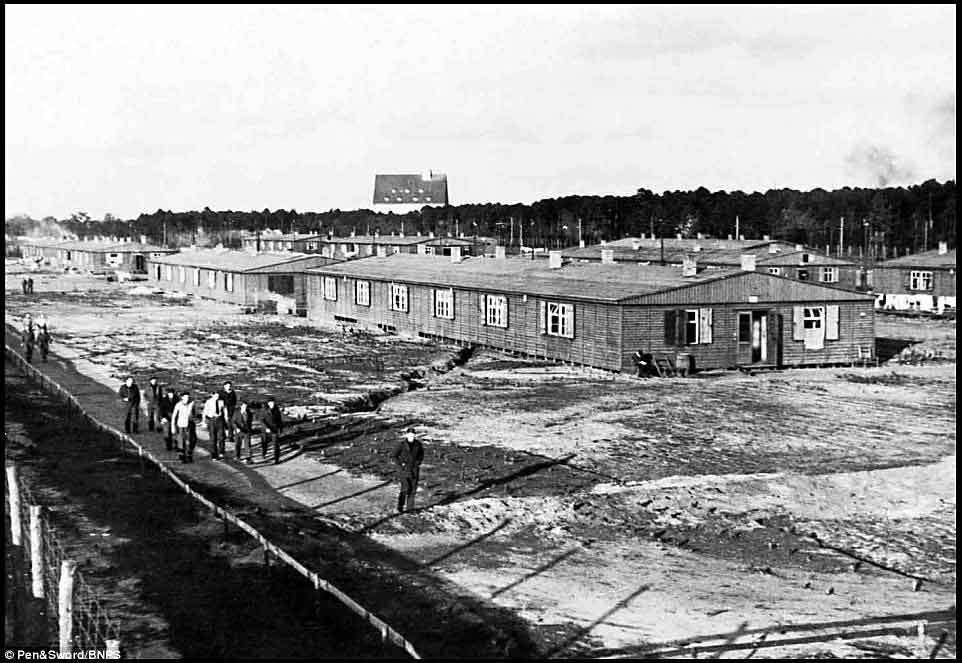 Bushell was well aware of the tremendous risks.  A family who had harboured him in Prague for some time was betrayed and executed.  He was himself interrogated for three months by the Gestapo (‘Geheimestaatspolizei’ – secet police).  Some of his air force colleagues later described him as cold and aloof.  For Major Dick Churchill (unrelated to British Prime Minister Winston Churchill), however, Bushell was a person with charisma – “a great deal of authority”.

The senior British officer (SBO) in Stalag Luft III quickly designated Bushell leader of the ‘X’ Organisation (escape committee).  ‘Big X’ as he was called, deliberately delayed a tunnel escape.  A new sector was being built in the northern part of the camp to whioch 850 POWs (called ‘Kriegies’) were to be moved in 1943, comprising mainly air force personnel from Britain and the Commonwealth, but also from other parts of Europe and Norway. 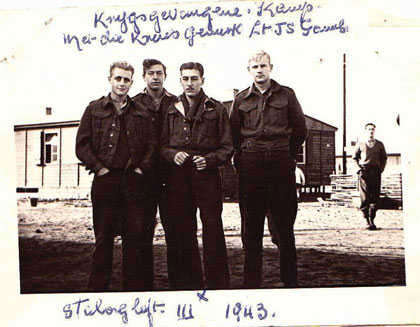 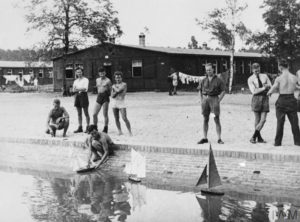 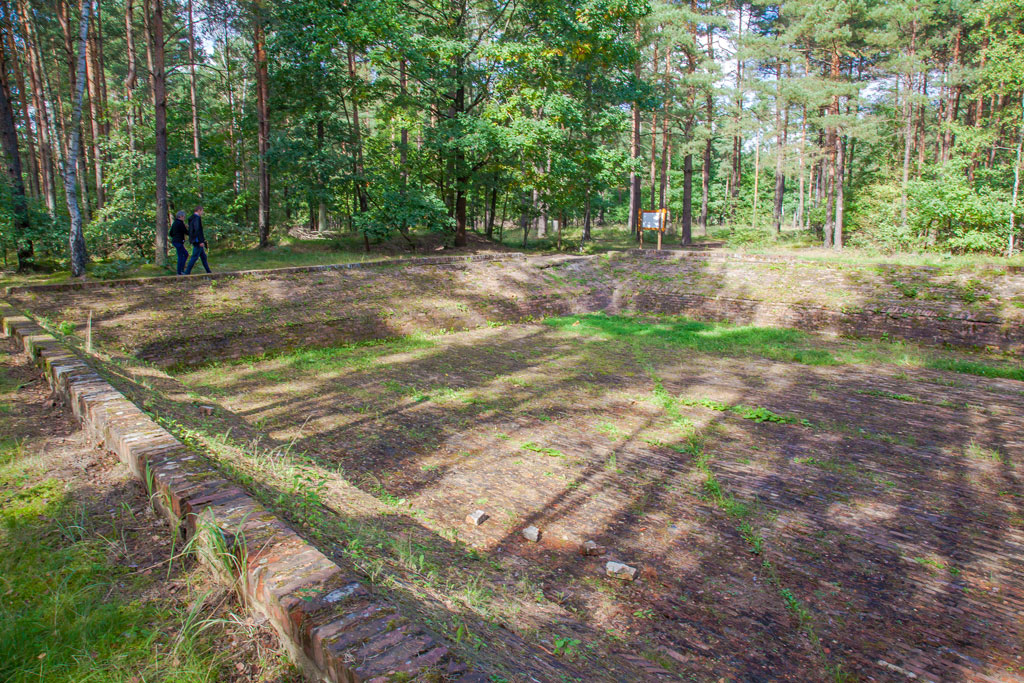 Neville McGarr (26) excelled in sport and academic performance at school.  What made his story remarkable, is that he became paralysed by polio at age 12 and required a long period of therapy to regain full mobility.

As fighter pilot with the famous “Flying Cheetahs” – 2 Squadron South African Air Force (SAAF), he was patrolling near the Libyan border with Egypt in 1941 when his Curtiss P-40 Tomahawk aircraft was attacked by German Messerschmitt Bf 109 fighter planes.  Although he landed safely by parachute, minus one shoe was, he was forced to walking towards Allied lines for days without much food or water.  Some kilometres from safety he was captured. 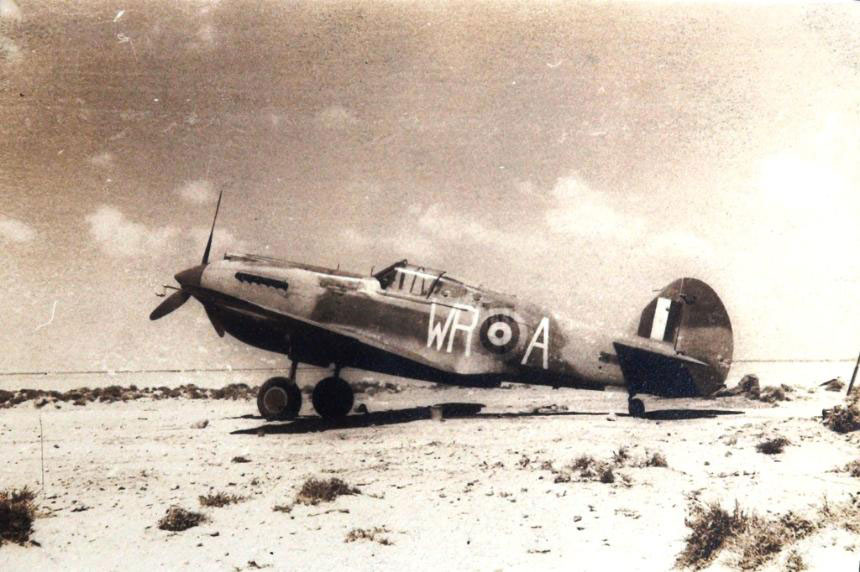 At Stalag Luft III he offered to help with tunnelling, but due to his large physical size, McGarr was rather assigned sentry duty to warn of approaching German guards.

Farmer boy from the Free State province Boetie Gouws (24) had one ambition, which was to become a pilot in the air force, but his poor English almost put an end to it.

Finally, in 1941 he joined 40 Squadron SAAF that was subsequently transferred to Egypt.  As happened to McGarr, Gouws’ Tomahawk fighter was attacked by Messerschmitt Bf 109s.  He managed to crash land the plane, but was captured. 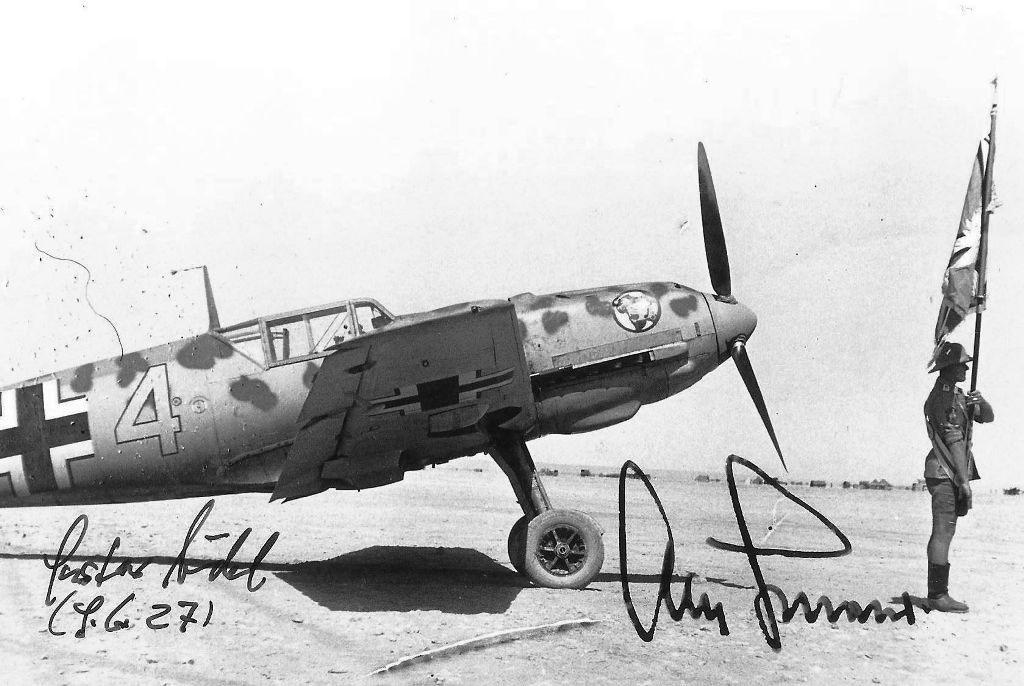 What Gouws could not know, was that his German counterpart responsible for downing him, was one of the Luftwaffe’s top aces, Gustav Rödel, who ultimately brought down 97 Allied aircraft during the war.

Rupert Stevens (25) was born in London, but emigrated to South Africa as a minor with his parents.  Upon completing school at the prestigious South African College School (SACS) in Cape Town, he received his pilot wings just before the outbreak of war. 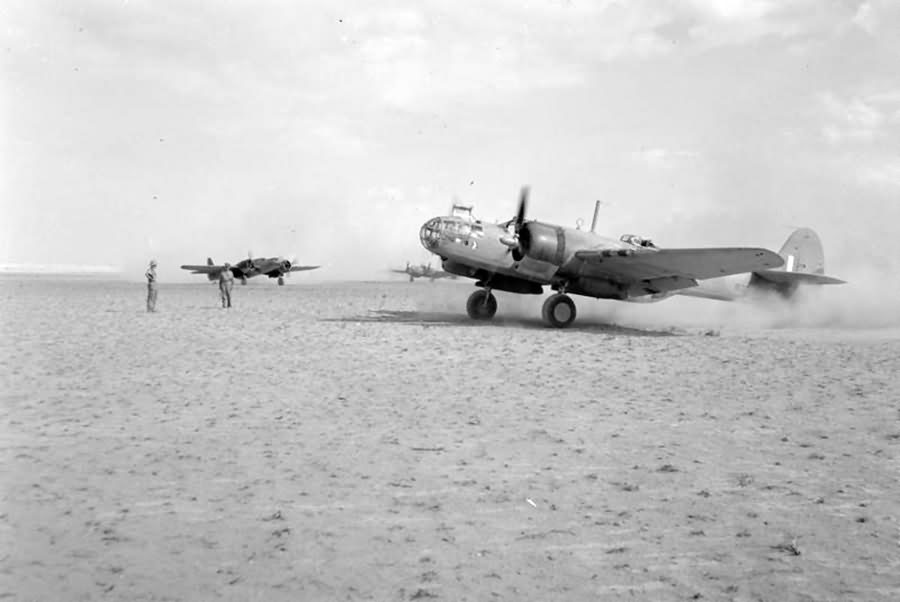 Attached to 12 Squadron SAAF, Stevens was flying over the western desert when his Martin Maryland bomber was hit by anti-aircraft fire and he struggled to make for Tobruk.  Unfortunately, he miscalculated by approaching an enemy town where his aircraft was once again hit by ground fire.  With Stevens wounded and unconscious, the aircraft crashed, killing his navigator.  Stevens survived and was treated in a German hospital before being transferred to Stalag Luft III. 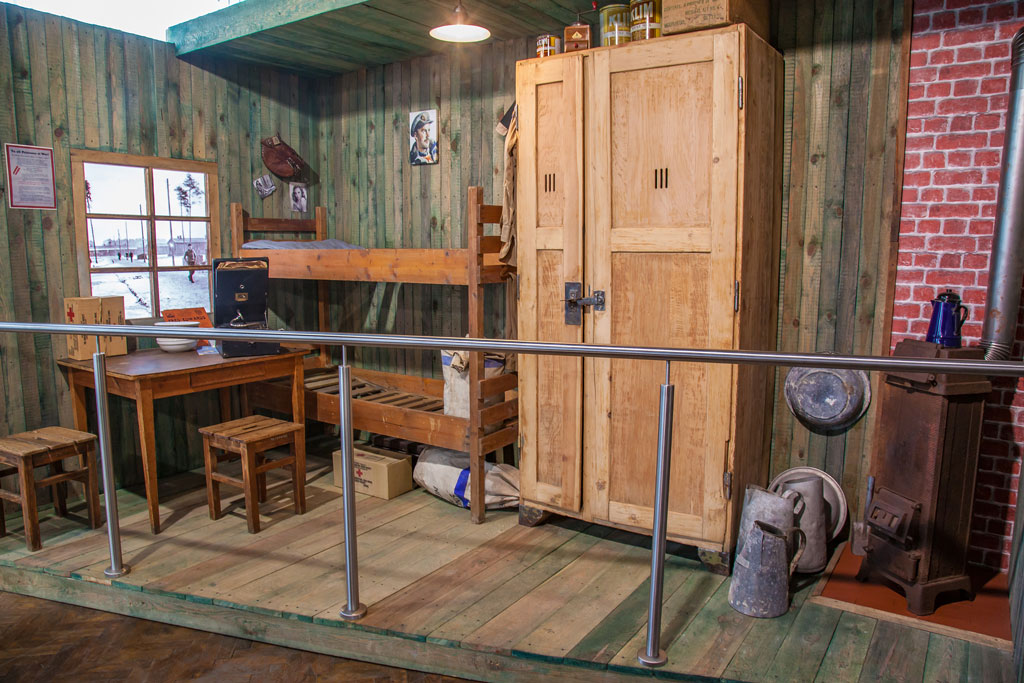 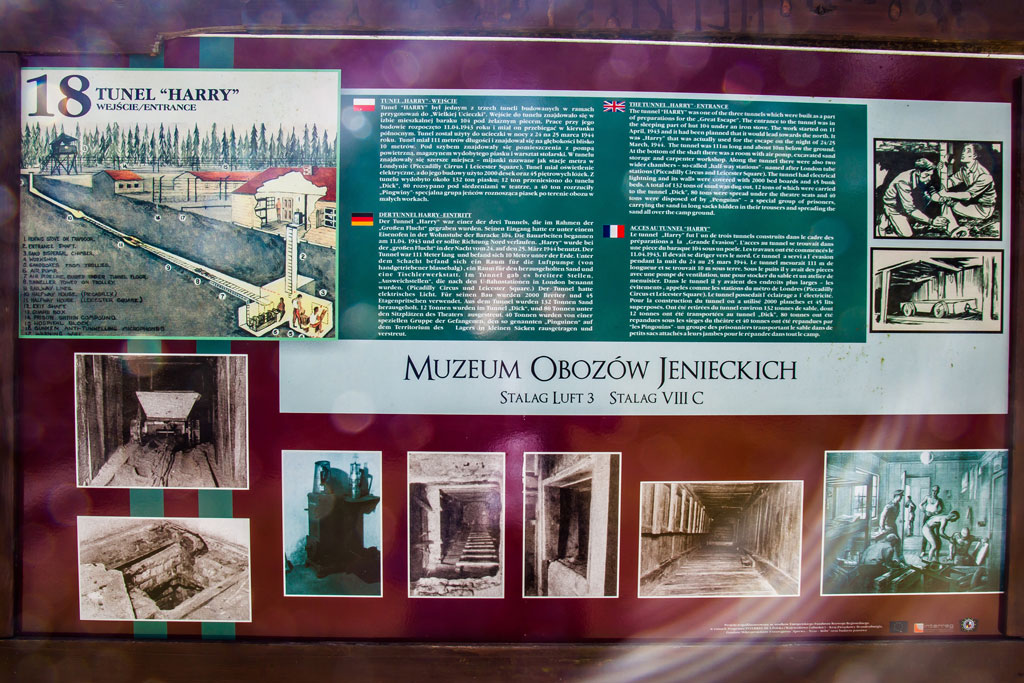 Bushell’s philosophy was to continue the war “from behind the wire”.  He intended as many as 600 men to escape and started to simultaneously dig three tunnels, Tom, Dick and Harry.  Each would be mined horizontally at a depth of 30 feet (10m) to thwart the camp’s underground detector microphones. 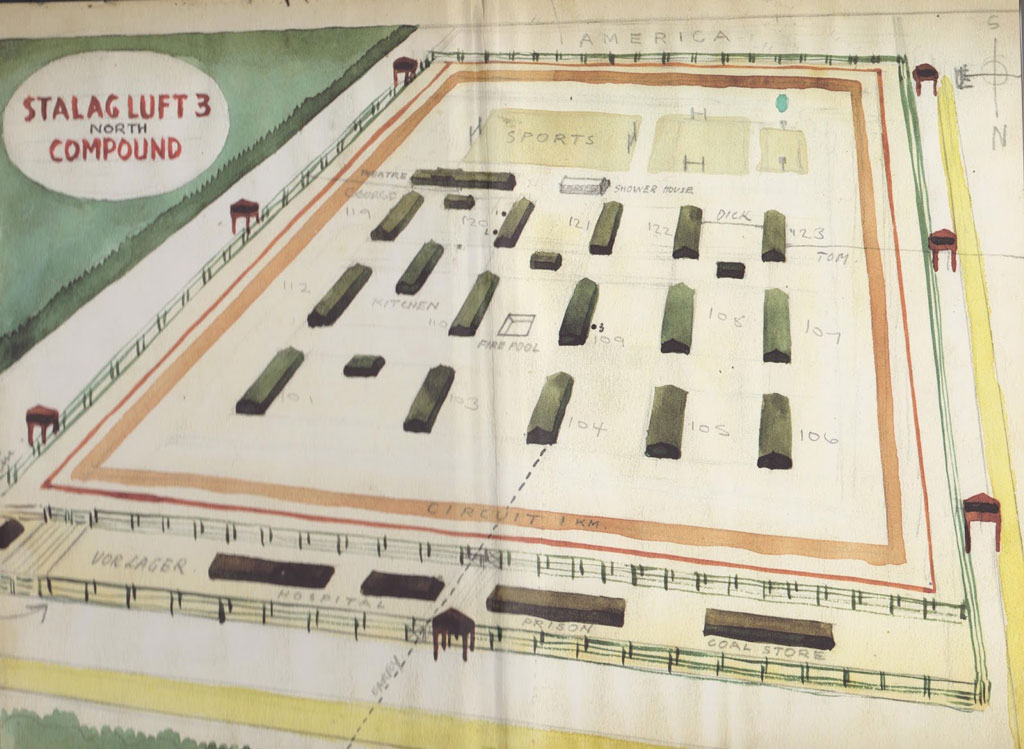 In this drawing of the north compound, its main features, including the tunnels Tom, Dick and Harry are shown 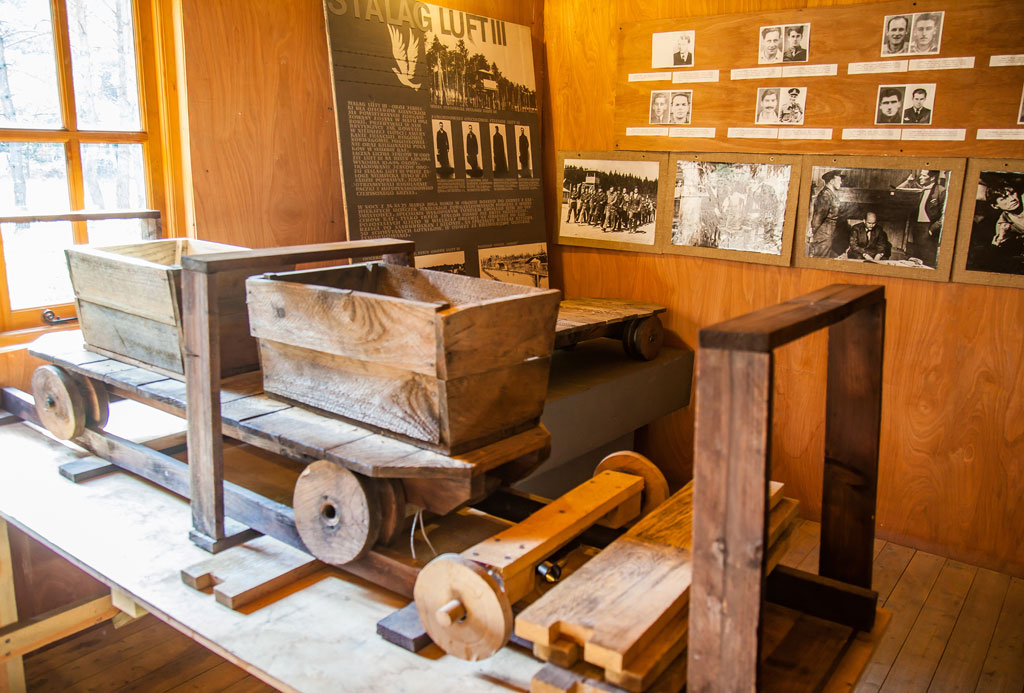 A vertical shaft down to tunnel Harry was concealed under Hut 104’s stove.  Hundreds of tons of sand loaded on wooden trolleys hauled on tracks had to be removed and dispersed without being seen.  This often entailed the use of trouser bags from which the ‘Kriegies’ streamed the sand down their trouser legs whilst marching or when working in the vegetable patch.  Sand was later dumped in Dick that had to be discontinued when a new camp sector was being constructed in its path.  Huge quantities were carried into the theatre at night to be dispersed under the auditorium floor. 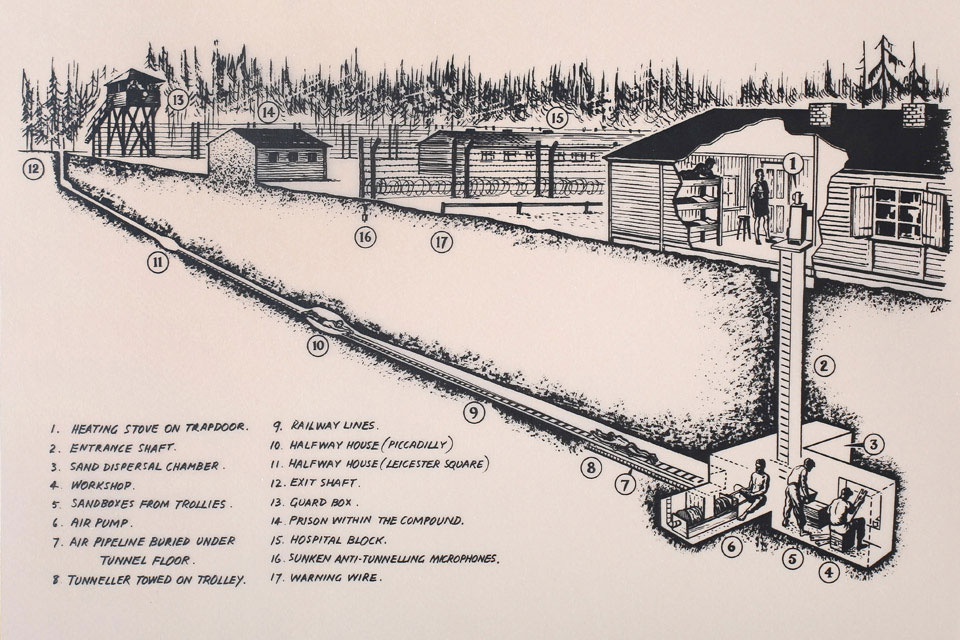 Thousands of bed boards were used to shore up the tunnel walls and roof.  Home-made candles and later electric bulbs on stolen cable provided lighting.  Ventilation was provided by means of a bellows and pipes assembled out of KLIM powder milk tins.

Meanwhile ID-documents, work permits, and travel papers were forged, civilian clothing stitched and dyed from military uniforms, route maps drawn, and compasses built – even stamped on the back: ‘Made in Stalag Luft III’.

All to no avail.

24 March was bitterly cold with heavy snow that would complicate the escape.  Worse still, a British bombing attack on Berlin caused Stalag Luft III’s lights to be extinguished – just as the escape got under way.  In the suddenly pitch-dark tunnel, escapers experiencing claustrophobia thrashed about, causing sand to cave in. 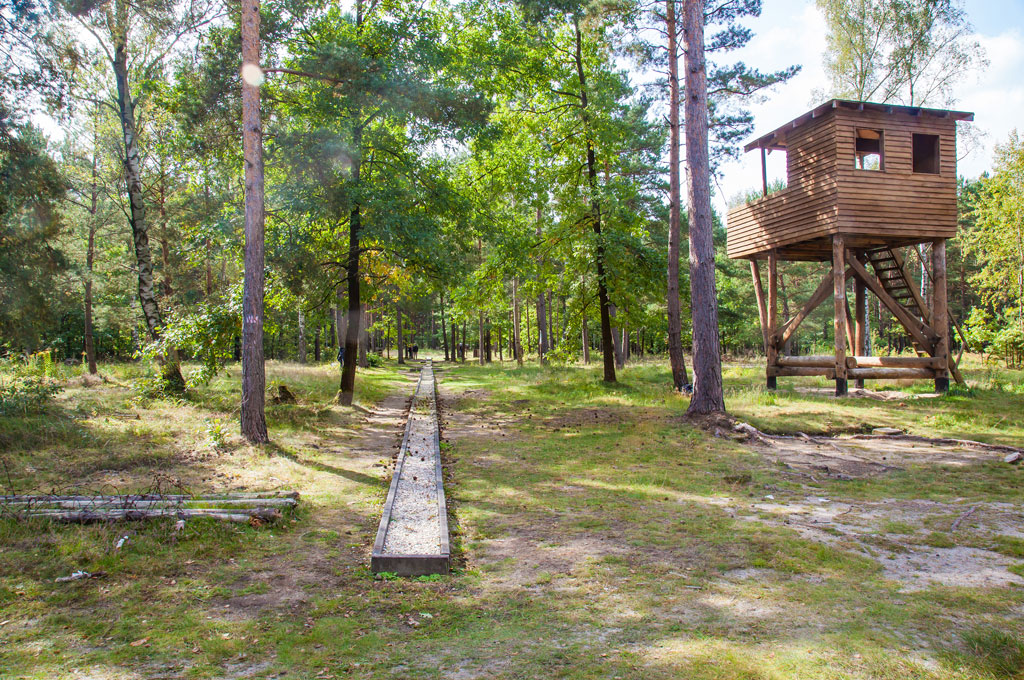 Tunnel Harry ran about 345 feet – approximately 105m, shown here at its exit near a guard tower

In the inevitable delays only 76 men managed a getaway before the tunnel exit was discovered.  Some of these known as “hard-assers”, including McGarr, braved the elements to flee on foot.  Others like Bushell, Gouws and Stevens, boarded the train from Sagan station travelling via Breslau (renamed Wrocław) to neutral or Allied countries in Europe. 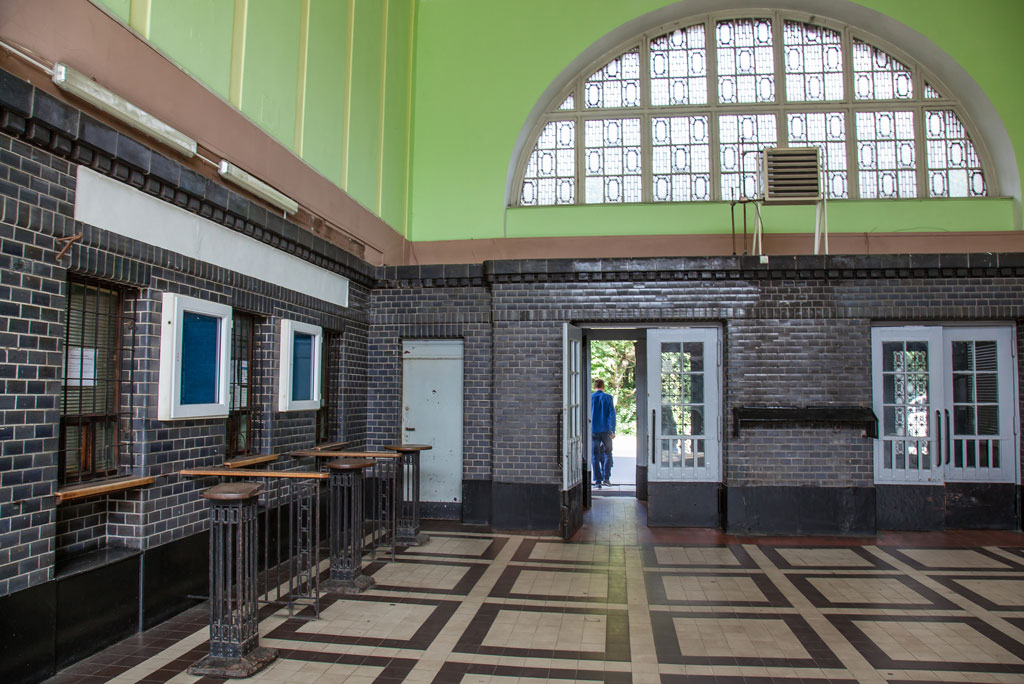 Many escapees bought train tickets in Sagan station, which appears little altered from the wartime period

An unprecedented massive dragnet (‘Gross Fahndung’ in German) involving all public entities saw 73 men being recaptured within days.  Only three officers made it to freedom.

Bushell and his fellow escapee of the Free French Air Force, Lieutenant Bernard Sheidhauer, were stopped virtually on the border at Saarbrücken and handed over to the Gestapo.

Upon being informed, Hitler was incensed and ordered that 50 should be shot.

On the pretext that they were being returned to Sagan, ‘The Fifty’ were executed en route and immediately cremated.  During the following weeks the Gestapo returned the ashes to Stalag Luft III at night.

Britain would not let this atrocity go unpunished.

Former air force officer and detective-sergeant Francis McKenna of the RAF’s special investigations branch managed, despite extremely difficult circumstances, to track down most of the murderers.  He identified Gestapo member Emil Schulz of Saarbrücken as the one who had shot Roger Bushell. 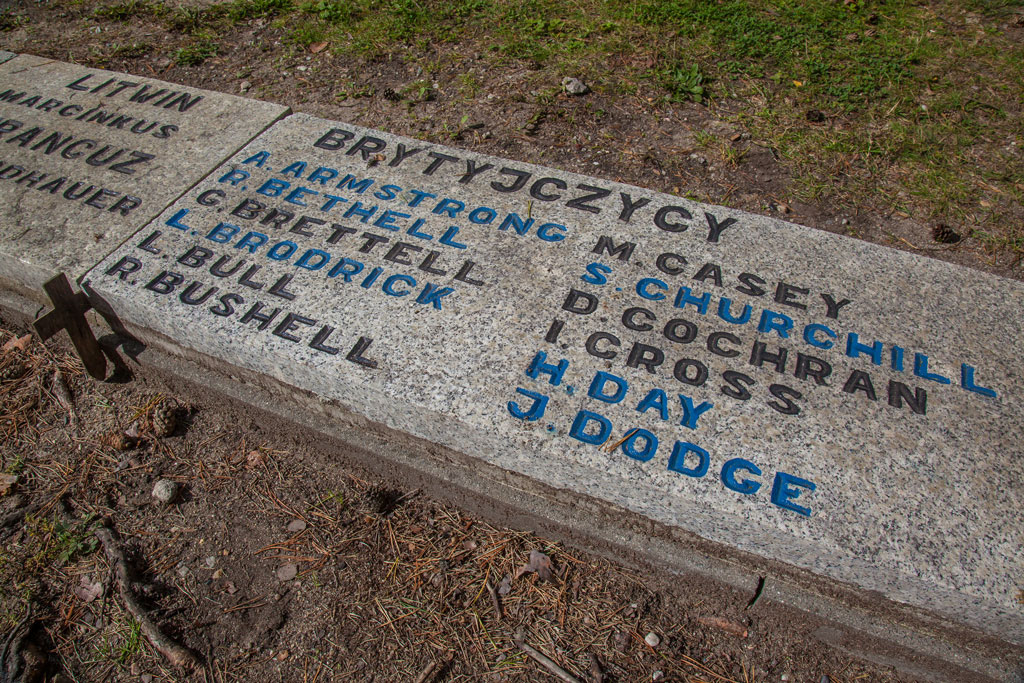 Bushell’s name appears among the British escapees. Those whose names are in blue survived the Gestapo execution

Likewise, the murderer of Johannes Gouws and Rupert Stevens.  Johann Schneider of the Munich Gestapo had acted in concert with Eduard Geith, Emil Weil and Martin Schermer.  They even stole the two South Africans’ money – and a wristwatch – to pay for their cremation.  The killers were put on trial and executed in 1948. 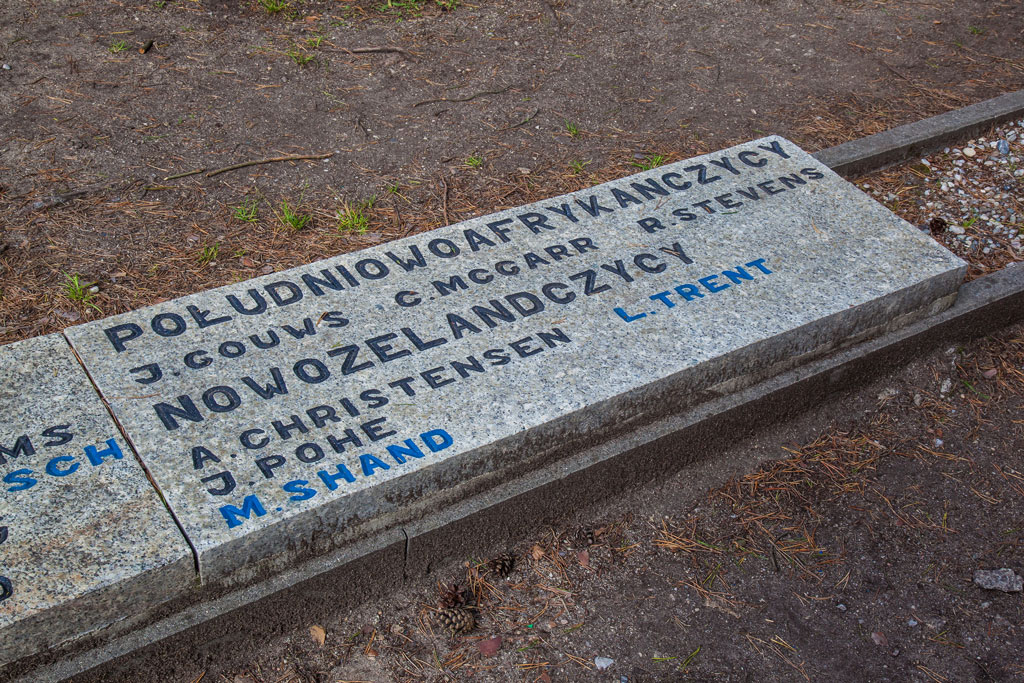 The names in black of the South Africans who were murdered

Along with five other escapees Neville McGarr was taken from the Görlitz jail and shot.  It was never determined who was responsible. 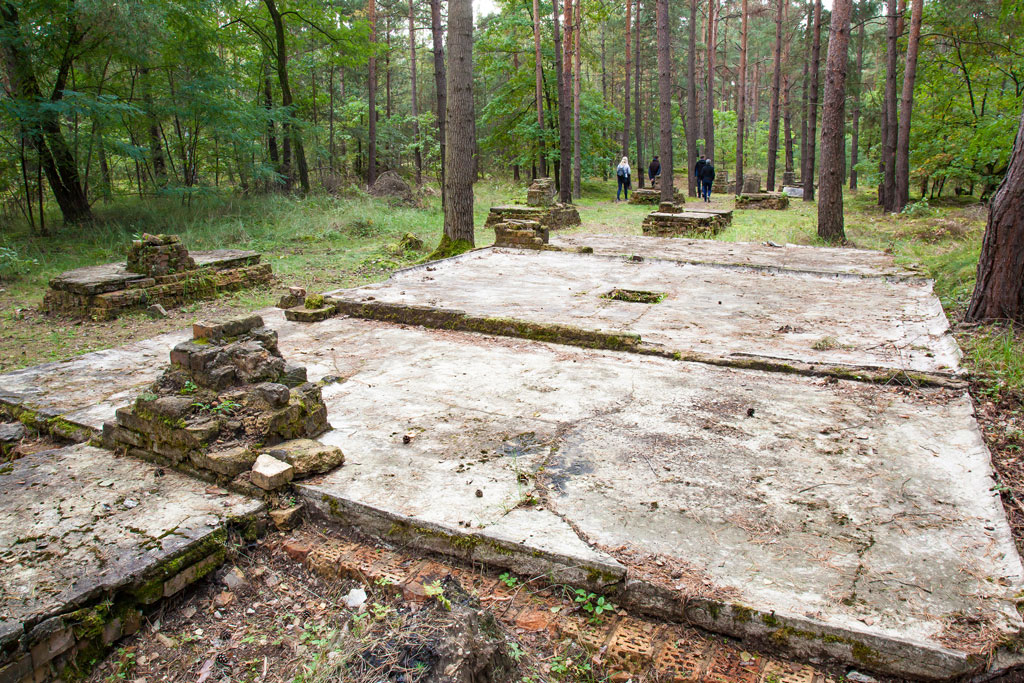 Remnants of the huts on the site of Stalag Luft III camp, a silent testimony to a daring feat

The remains of the four South Africans lie buried in Poznań, Poland.  Dick Churchill, the last remaining Great Escaper, died in February this year at the age of 99.

*          Sam Basch was born in Springs and spent his childhood years on the Daggafontein Mine.