Most first-time visitors to London head straight for the ‘must-see’ tourist sites: Buckingham Palace, St Paul’s, Trafalgar Square, Tower of London. Or to Harrod’s  for shopping – no, just browsing, as our Rand is now effectively small change.

Many pose for a photograph “supporting” Big Ben (actually that’s the tower from which ‘Big Ben’, the bell of the north-facing clock, famously chimes).

Apart from the popular London Eye all of these attractions are north of the River Thames, where the Romans built a settlement they called Londinium way back around the year 43.  It’s because they deemed it the nicer side – less prone to flooding and easier to defend.

But for now I turn my back on that side of London – at least for a day or two – for there’s lots to see on the south bank.

Long considered the ugly stepsister to the metropolis, with a sordid reputation to match, the Bankside area of Southwark is fast becoming fashionable. Even the venerable Financial Times now has its headquarters at One Southwark Bridge.

Bridges have always been key to life in London – not a sentiment the watermen, who for centuries provided transport across the Thames, would agree with. Like today’s taxi drivers they were exceedingly rude, often even demanding a higher fare midstream. And getting their passengers suspiciously fall overboard and drown. The watermen are long gone, but I found one the few remaining stairs where they picked up passengers;  most were built over when the Thames was embanked.

London Bridge has always been there to connect the city with Kent and Surrey. Actually, not. Since Roman times there have been at least four structures called London Bridge.  The last one was sold to an American who reassembled it stone for stone in Arizona, leaving the British capital with a rather uninspiring replacement. 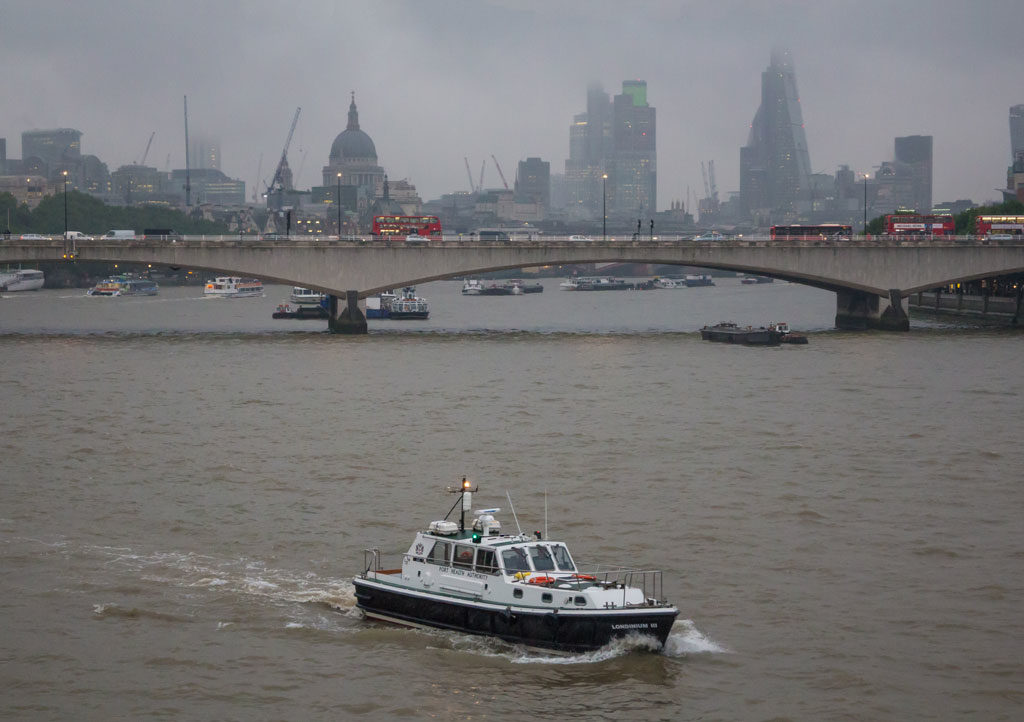 From St Paul’s I stroll across the Norman Foster inspired Millennium Bridge. The view is much nicer than riding the Tube that runs blind underneath the Thames. It brings me to the Tate Modern, the converted Bankside power station that is home to London’s impressive collection of contemporary art.

Further along is Shakespeare’s Globe, a half-timbered theatre modelled on the 16th century playhouses like the Swan and the Rose. This 3 000-seat replica Globe was opened in 1997 near the site of the Rose Theatre destroyed in the 1700s, the foundations of which are currently being excavated.

Of course, theatres and actors were not only frowned upon in centuries gone by; the Puritans closed them down and persecuted the owners.

In its bad day Southwark was a notorious hideout for miscreants who robbed and murdered in London, then hotfooted it across the river to hole up here beyond jurisdiction of the city authorities. It was for exactly this reason that the area offered all sorts of illicit entertainment:  theatres, gambling dens, brothels and taverns.  Bear-baiting, bloody spectacle as it undoubtedly was, pitted packs of mastiffs against a chained animal, making – or losing – punters lots in betting money.

Brothels known as the ‘stewes’ operated from the coaching inns and taverns – of which there were scores here – under license from the corrupt Bishop of Winchester who resided in an impressive riverside palace in Southwark.

Travellers heading in and out of London often spent the night at the inns as London Bridge was closed to traffic after hours. I seek out some of the old taverns:  the George Inn (only surviving galleried coaching inn on Borough High Street), the White Hart (where Charles Dickens often had a pint), the Queen’s Head. Chaucer’s pilgrims, starting their fictional journey south in The Canterbury Tales, departed from the Tabard (now called ‘Talbot’):

“In Southwark at the Tabard as I lay / Ready to wander on my pilgrimage / To Canterbury with full courage.”

Those who ended up in debt or somehow annoyed the Bishop of Winchester could end up in prison. With his palace outside the city’s jurisdiction, many a soul languished in the Clink – today a somewhat overrated museum. Of the massive palace of the bishops only a section of the Great Hall remains.

The Anchor, one of the last of the licensed inns from the 1600s is today a colourful pub on Bankside Road. Recent renovations have led to criticism that it has turned into just another tourist trap.  But hey, most of London is a tourist trap!  Besides, I see many locals here, too. It offers ‘hand-battered cod fillet & chips’ with garden peas – ‘a classic British favourite’ – for about £11, or  Sunday roast, which goes down well with a pint of ‘Ghost Ship’ ale. 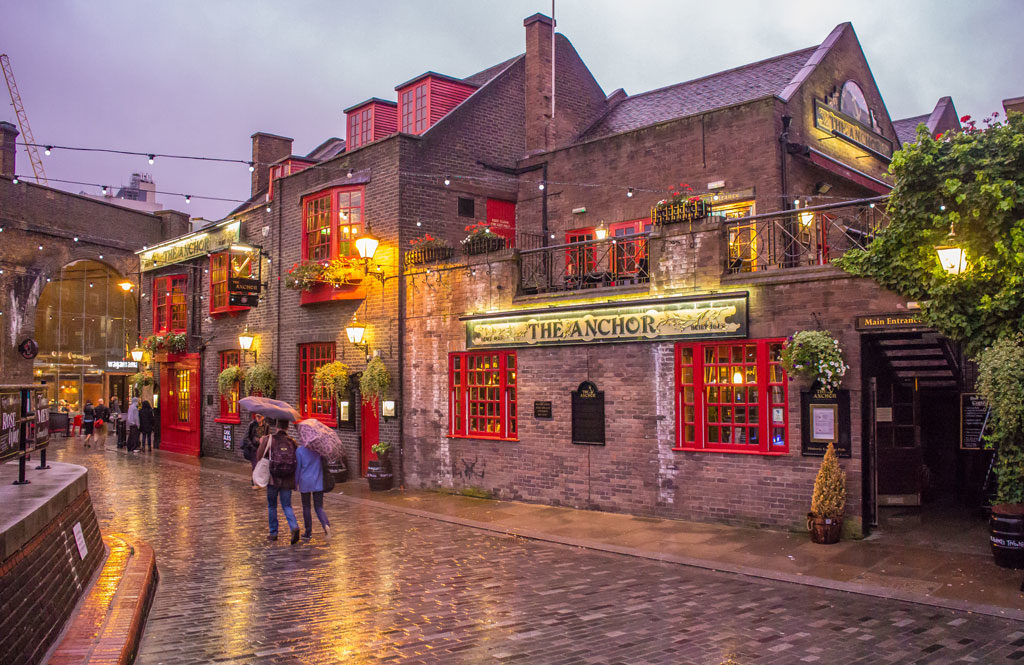 It was to The Anchor that famous diarist Samuel Pepys retreated in panic as fire ‘rained’ on his head when he was on the Thames during the Great Fire of 1666. “When we could endure no more upon the water, we went to a little alehouse on the Bankside,” he wrote. From here he witnessed the inferno devouring most of his beloved city, including Old St Paul’s.

As Britain entered the Industrial Age, much of the dingy old Southwark got demolished to make way for docks, factories and brick warehouses. But these in turn fell to the modern economy reflected in glitzy office blocks like Shard London Bridge, Britain’s tallest building. 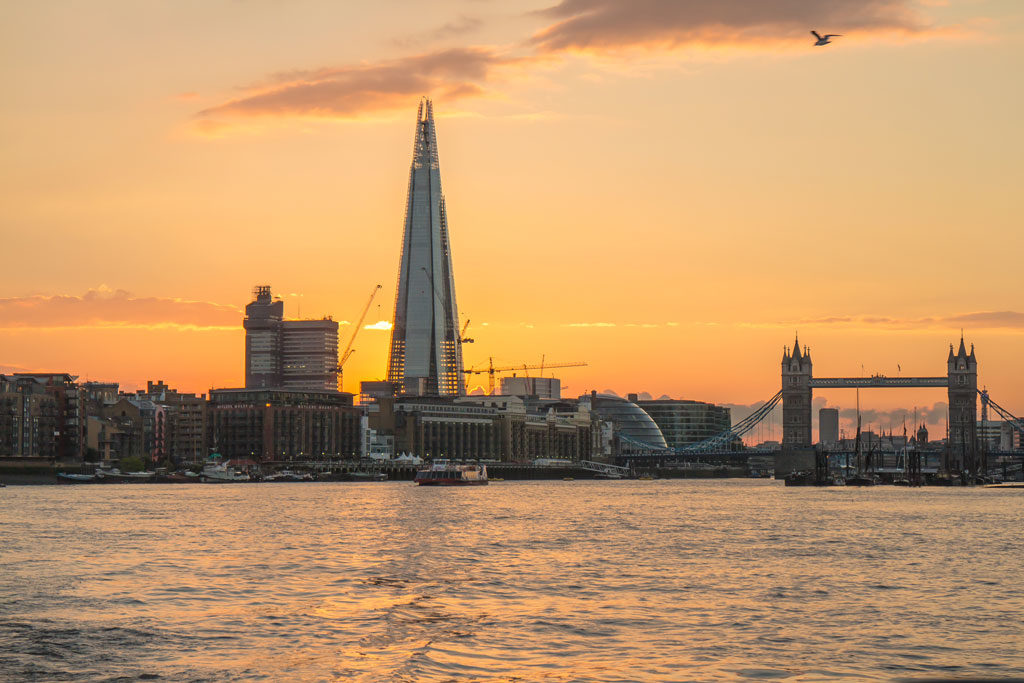 In its shadow, however, sits old-worldly Southwark Cathedral, which is worth a visit.  Entrance is free, but a friendly lady guide issues me a permit costing £2 to take photographs. The church dates from 1207 and, she tells me, Shakespeare likely prayed here:  his brother Edmund is buried in the choir area. I spot the Bard resting in a Bankside meadow – actually in an alcove, clutching a sprig of real rosemary in one hand. 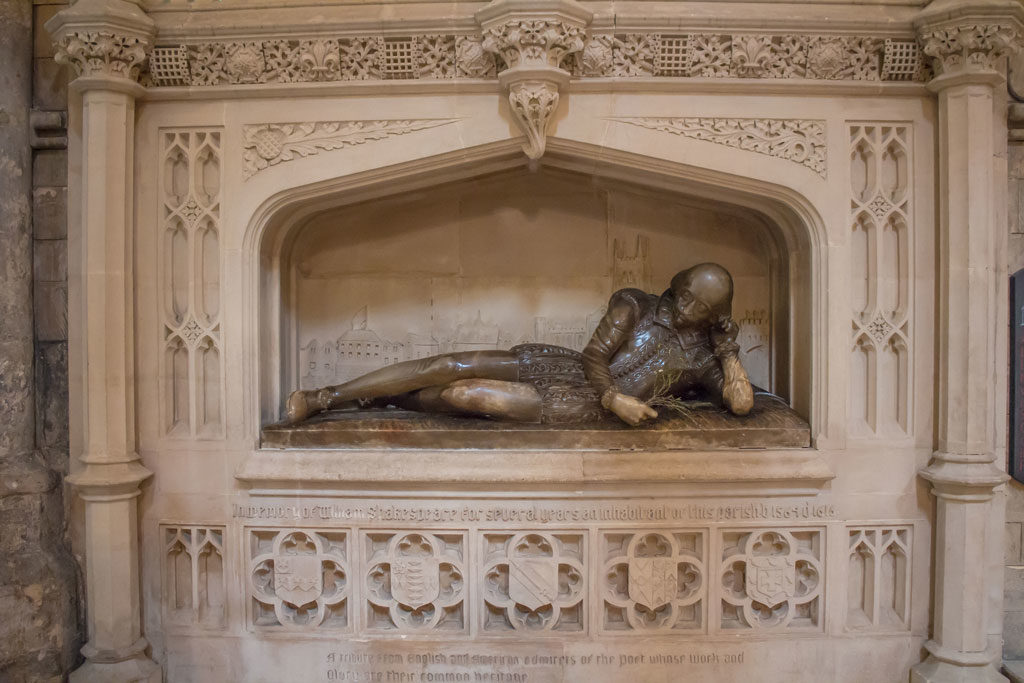 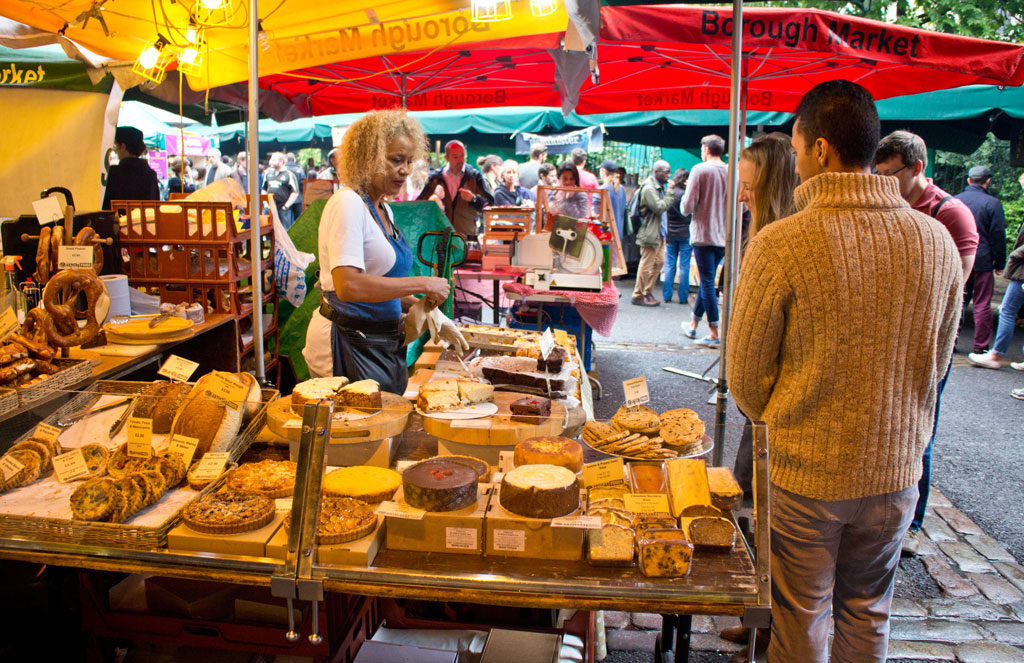 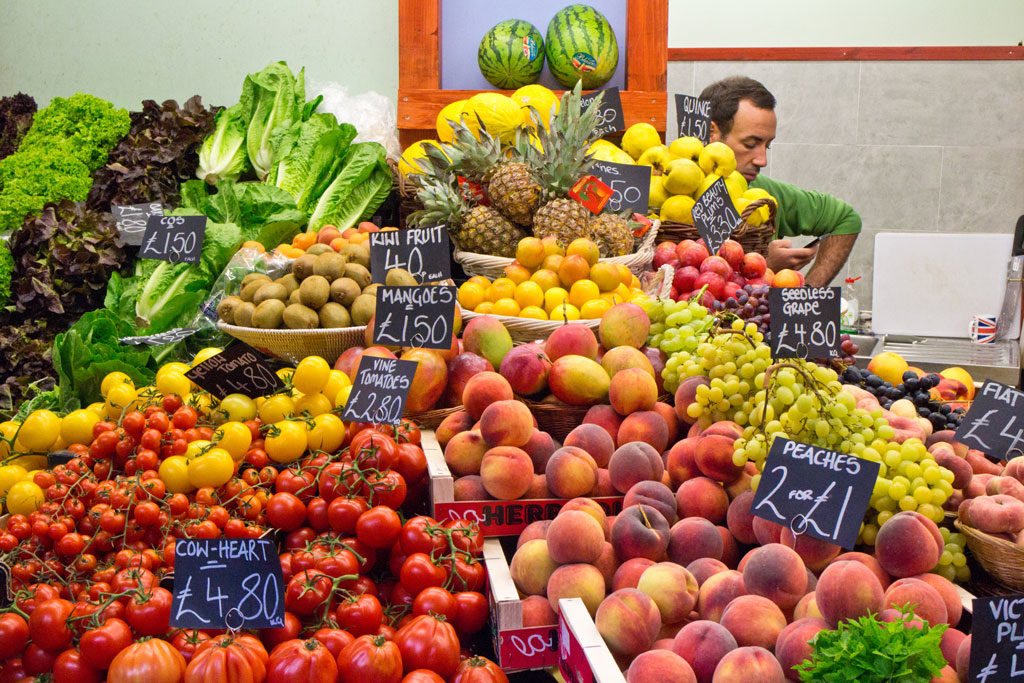 Wine lovers can indulge their passion in the nearby Vinopolis (‘wine city’), where there is a great variety to sample from the continent and beyond.

Squeezed between tall office buildings on the Thames riverfront is the Golden Hinde, replica flagship of Sir Francis Drake in which he circumnavigated the globe.  Surprisingly small for a vessel that carried a hundred men, it sailed back in 1580, bulging with a valuable hoard of gold, silver, diamonds, pearls and spices. For his efforts Drake received a knighthood right there on deck from Queen Elizabeth I whose share of the treasure amounted to £160 000 – a fortune at the time.

And talking of ships:  permanently moored along the south bank upriver from Tower Bridge is HMS Belfast, a World War II battle cruiser that saw action against Germany’s Scharnhorst and in the Normandy landings.  She is part of the Imperial War Museum. 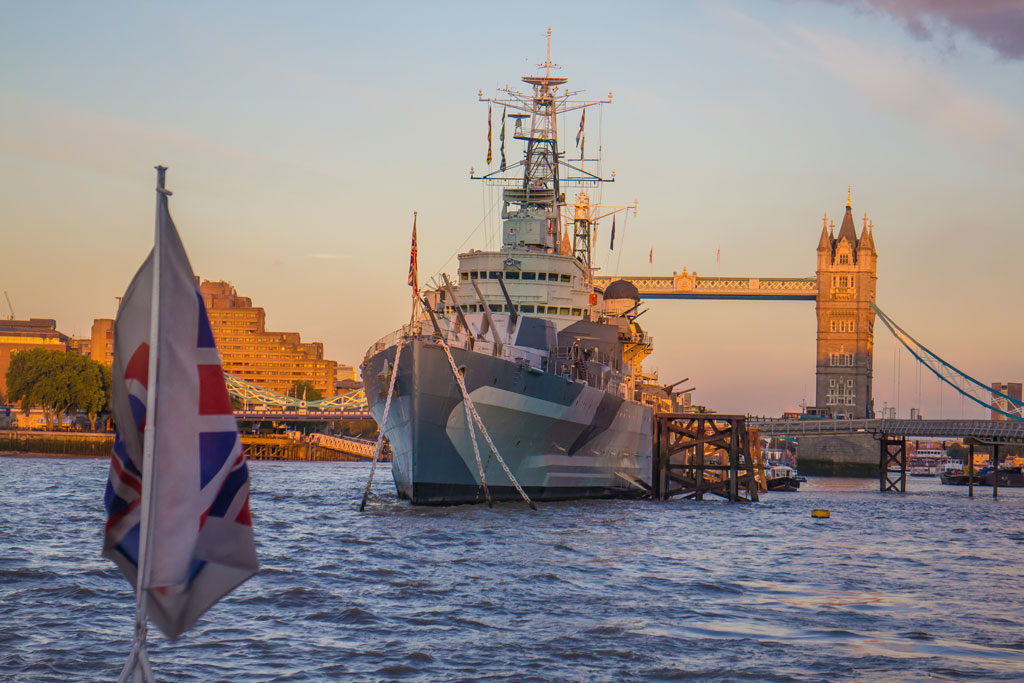 Then I cruise down on the new Thames Clipper fast riverboat service to Greenwich where the Cutty Sark is on display.  A real clipper ship that brought tea from China and wool from Australia during the 19th century, she was opened in 2012 after undergoing extensive restoration – which almost came to nothing due to a fire. What makes Cutty Sark well worth a visit is that she is about 90 per cent original, and elevated in her glass-domed dock, is showing off her copper-clad keel – her secret for speed. 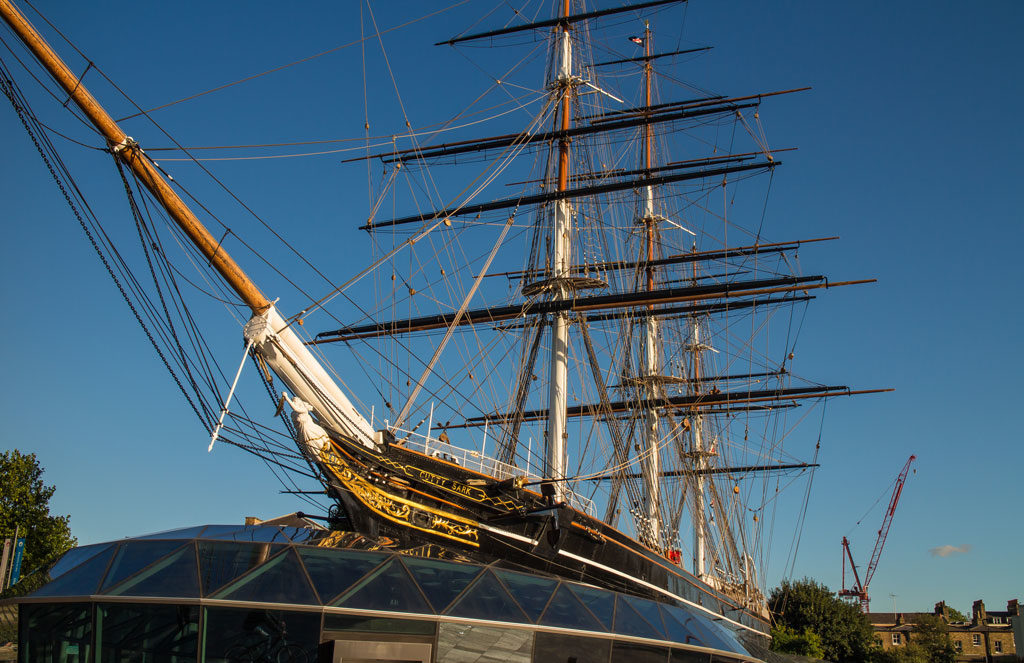 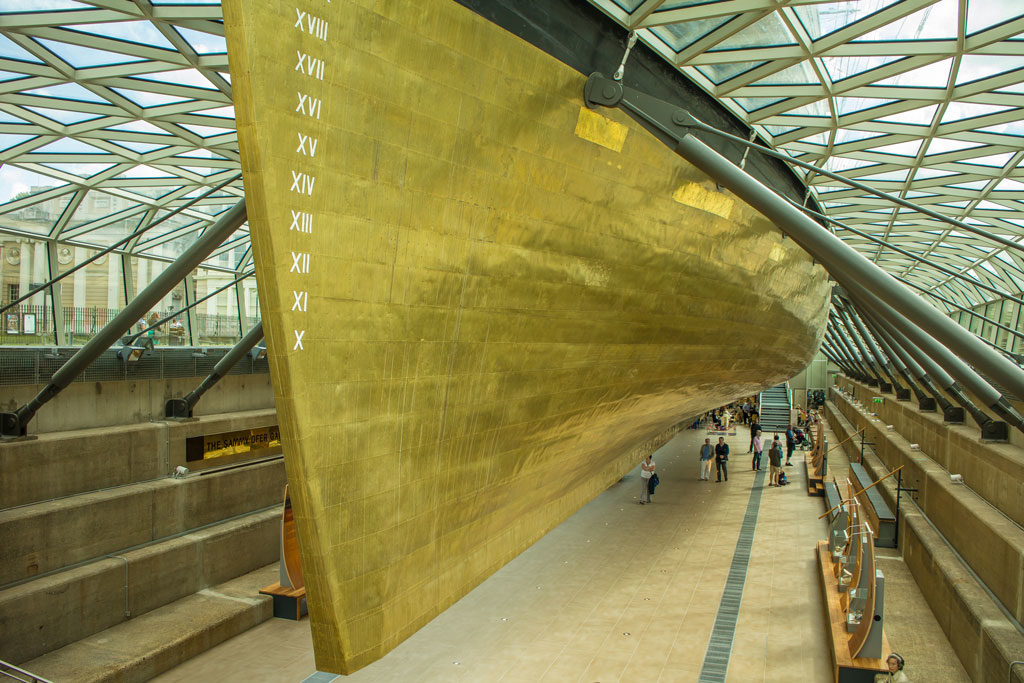 I board the fast clipper again, this time to the north side for an afternoon pint at the Prospect of Whitby. The setting sun glints on the glass towers of Canary Wharf as lazy river traffic floats by. Dating from around 1520 when Henry VIII was king, Prospect claims to be one of London’s oldest riverside pubs, from where the likes of Turner sketched the south bank – the side so often overlooked by tourists to London. 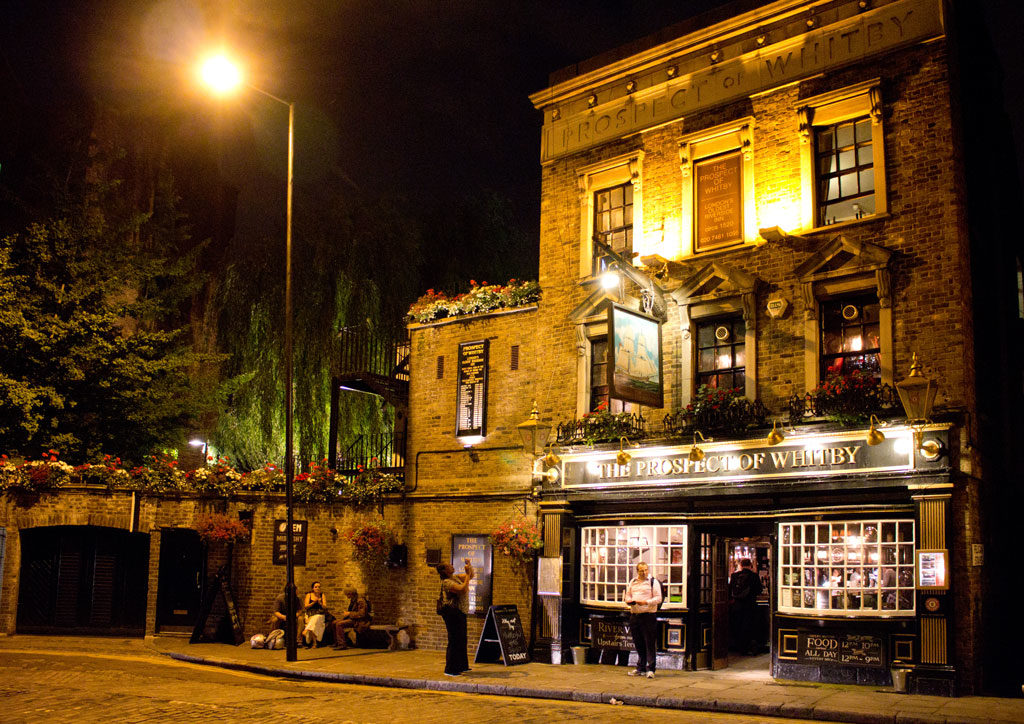 Read the highly informative and entertaining ‘Bankside – London’s Original District of Sin’ by Alan Brooke and David Brandon, published by Amberley Publishing, May 2012 – also available as an e-book.  There is also the short ‘Rick Steves’ Walk’ guidebook on Bankside, useful for a  self-guide walking tour, produced by Avalon Travel Publishing, February 2012;  also an e-book.

For performances at Shakespeare’s Globe Theatre:  (www.shakespearesglobe.com / tel.:  0207 401 9919) rent a cushion as the benches on the gallery levels become unbearably hard after three hours!

Borough Market: (http://boroughmarket.org.uk/) is open from 10am to 5pm most weekdays, and on Saturdays from 8am.

Southwark Cathedral:  (http://cathedral.southwark.anglican.org/visit/) – open weekdays from 8am to 6pm;  slightly later on weekends.

The Golden Hinde II (www.goldenhinde.com/) at 1 Pickfords Wharf on Clink Street is open daily from 10:00 to 17:30, except during pre-booked private events.  Right next to it is another interesting riverside pub, the Old Thameside Inn.

The Vinopolis on Bank Street celebrates the Scottish poet Robert Burns during January 2014 with a Burns Supper and Whisky Masterclass and an Australian wine tasting masterclass.  Booking is essential: info@vinopolis.co.uk or 0207 940 8300 (no parking available).

[This article was published in the South African Sunday Times Travel Weekly, 6 April 2014, under the title “London’s Other Half”] 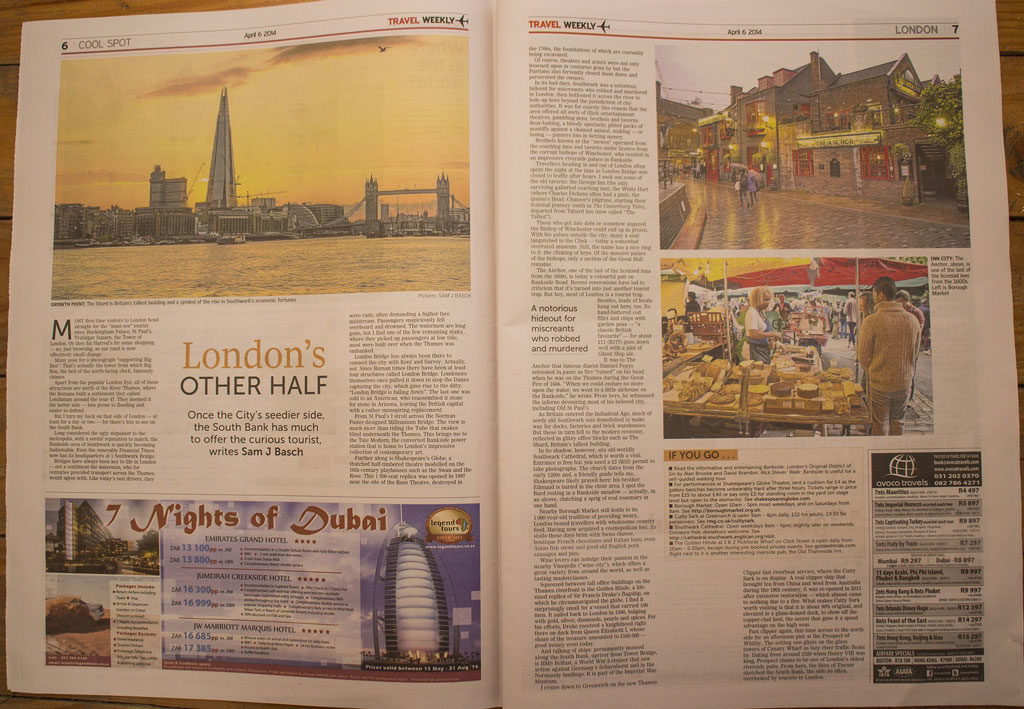