11 November 2018 commemorates the end of the First World War a century ago.  We know very little of one important protagonist in that bloody conflict, Kaiser Wilhelm II of Germany.  Some might remember him as sympathetic towards the old Boer Republics in South Africa.

About 25 kilometres from Utrecht in the Netherlands is the tranquil town of Doorn to which Wilhelm II, German Kaiser and King of Prussia fled after the war.  When he abdicated in November 1918, our guide explains, he brought personal belongings, furniture, silverware, art works and much more in 59 train wagons from his palaces in Germany. 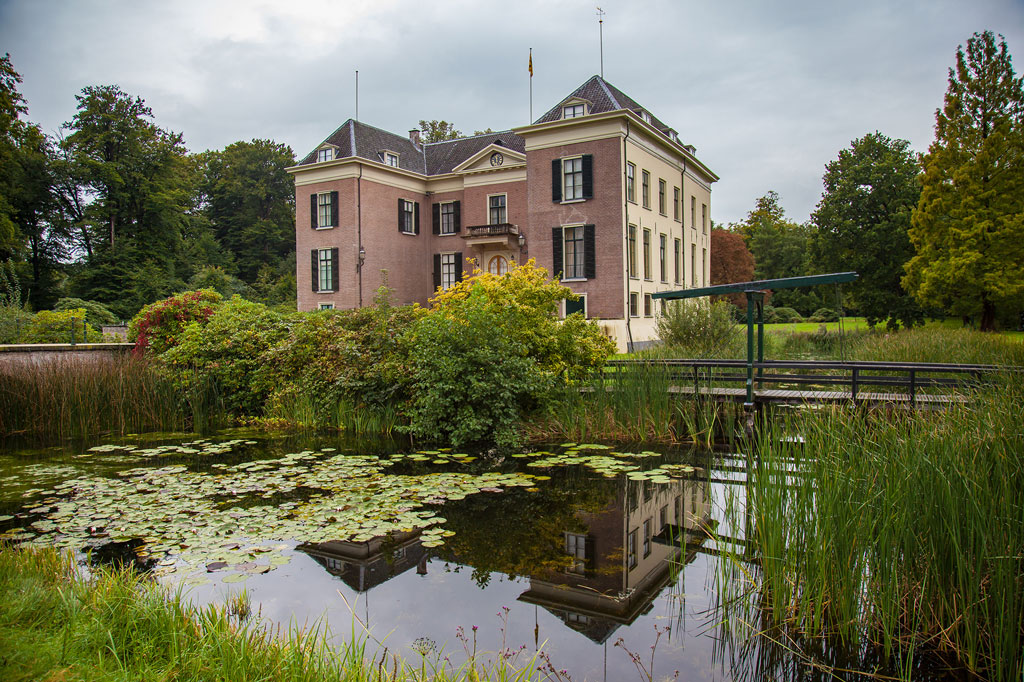 All this would hardly fit in Huis Doorn, a surprisingly small manor house he’d acquired.   Wilhelm opted to exile himself in neutral Netherlands, where the young Wilhelmina was on the throne.  He likely knew that she, whose ancestors were Prussian after all, would grant him asylum.  Otherwise the Allies might try him for war crimes due to his presumed role in the outbreak of the conflict.

Friedrich Wilhelm Victor Albrecht (1859-1941) was the first grandson of Queen Victoria and Prince Albert of England.  Their eldest daughter, also Victoria, was married to the later King Frederick III of Prussia.  Wilhelm was very fond of his British grandmother who even sent him a boy’s Scottish outfit.  (In the recent movie Victoria & Abdul we see Wilhelm as the young German officer at Queen Victoria’s deathbed).

During birth Wilhelm’s arm was injured, presumably by the physician who assisted his English mother with a difficult delivery.  Photographs and paintings clearly show him trying to obscure the visibly shorter left arm. 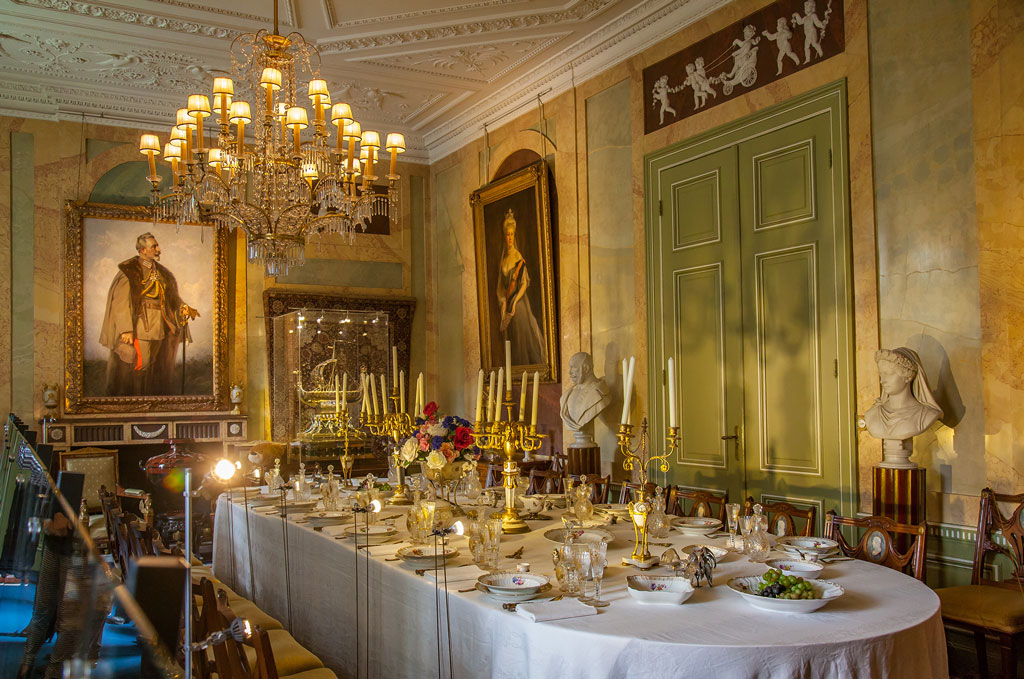 He ascended to the throne in 1888 when his father, whose reign barely lasted 100 days, died.  Wilhelm already got married in 1881 in Berlin to Princess Augusta Victoria, called Dona, daughter of Duke Frederick III of Schleswig-Holstein.  From this marriage six sons and one daughter were born.

Huis Doorn stands almost dwarfed among large trees in the midst of a verdant park.  Whilst the building dates from the 9th century, it was repeatedly renovated.  One of the conditions for Wilhelm’s stay there was to obtain permission for any travel further than 15 kilometres from the house.  He baulked at this and preferred to hunt or fish, or otherwise while away his time on the large estate by chopping down trees for firewood, gaining him the sobriquet of ‘The Woodcutter of Doorn’. 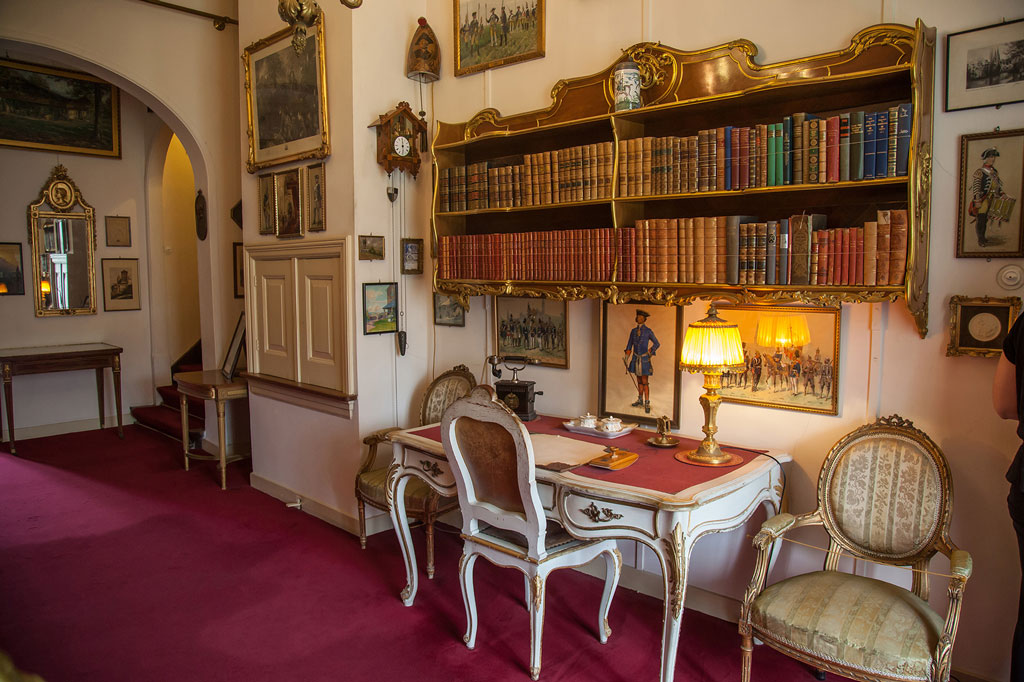 Kaiser Wilhelm II had an abiding interest in military affairs 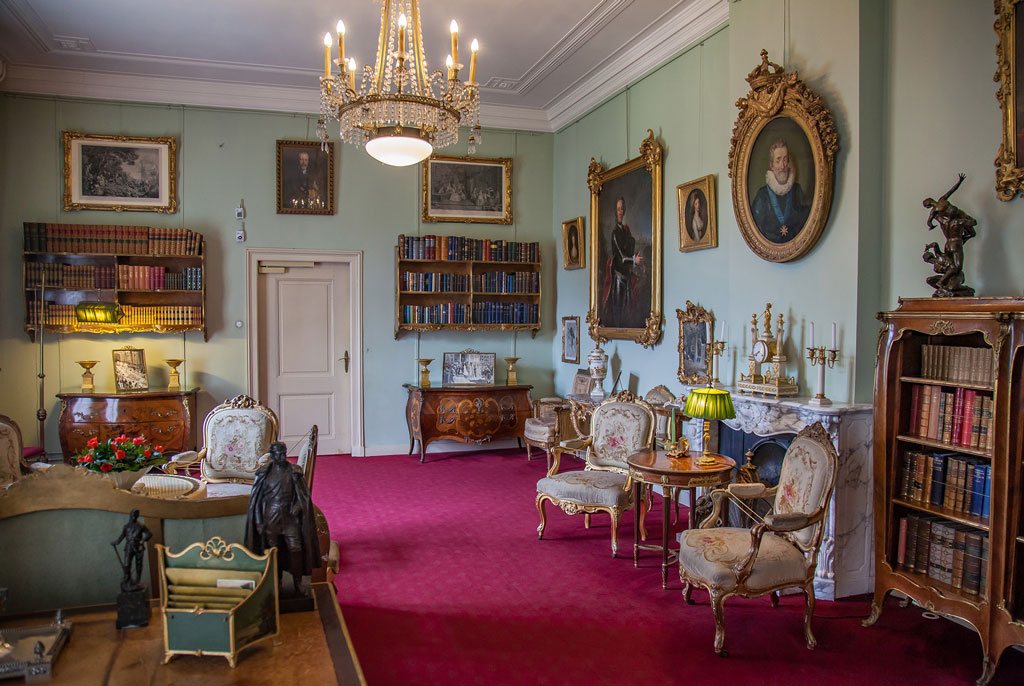 The small rooms are homely and intimate – with family photographs, flowers and fine ornaments on display. 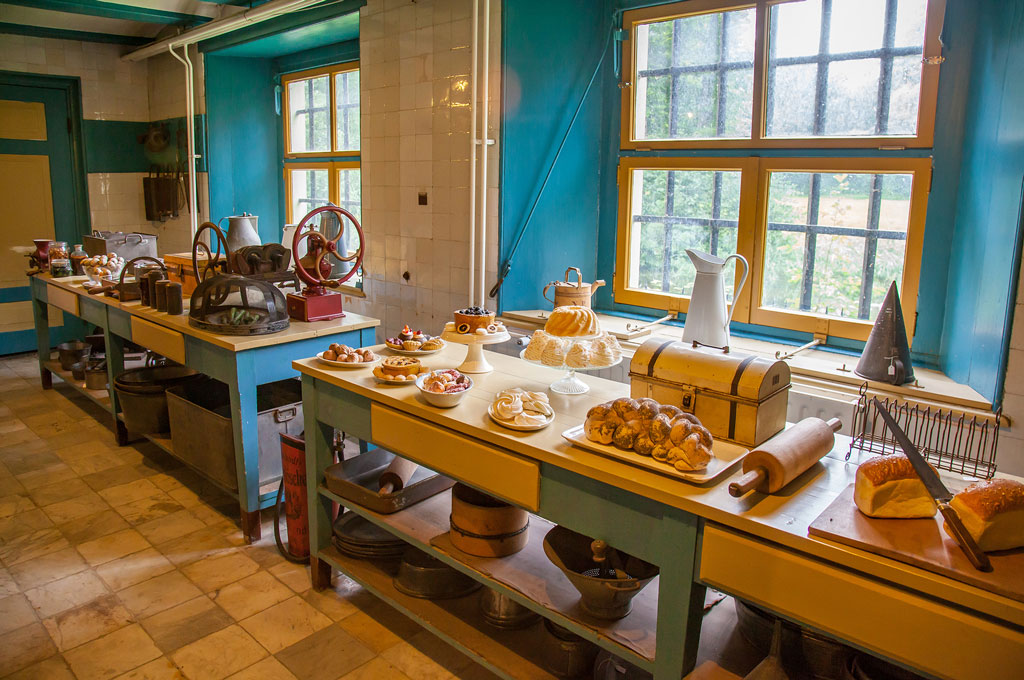 Bread and pastries occupy the kitchen counters.  It rather feels as if the inhabitants of the house had just stepped outside for a while.  In Wilhelm’s bedchamber hangs his gown, bed slippers and a tiny bouquet left by his only daughter on her father’s deathbed. 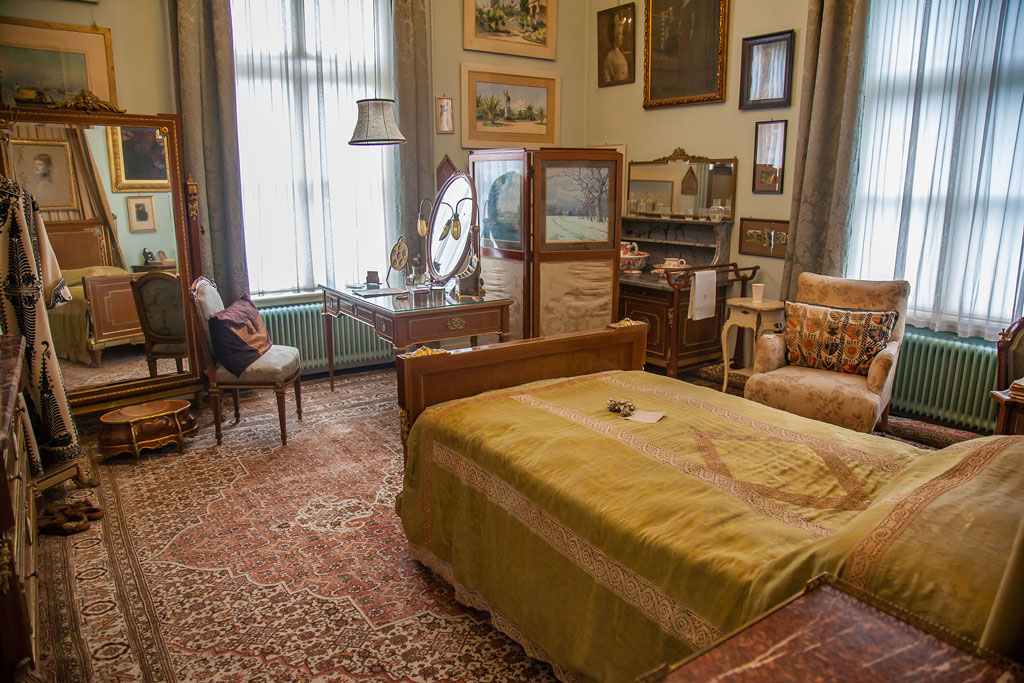 Judging from the jerky black-and-white film taken during Wilhelm’s sojourn in Huis Doorn, he was always the Prussian militarist with an imposing bullhorn moustache.  He was often dressed in uniform and numerous books and pictures above his desk reveal a keen interest in military affairs.  It has been said that his admiration for the British fleet was a driver for Germany’s own build-up of a strong naval force in the run-up to the First World War.

At times he caused the blood to boil among the British – including his grandmother Victoria, like when he congratulated President Paul Kruger for thwarting the Jameson Raid in 1896.  His interference in foreign affairs and domestic politics brought him into early confrontations with German leaders like Chancellor Otto von Bismarck.  Likewise, he soured relations with blood family such as his uncle King Edward VII of England and his cousin Czar Nicolas II of Russia. 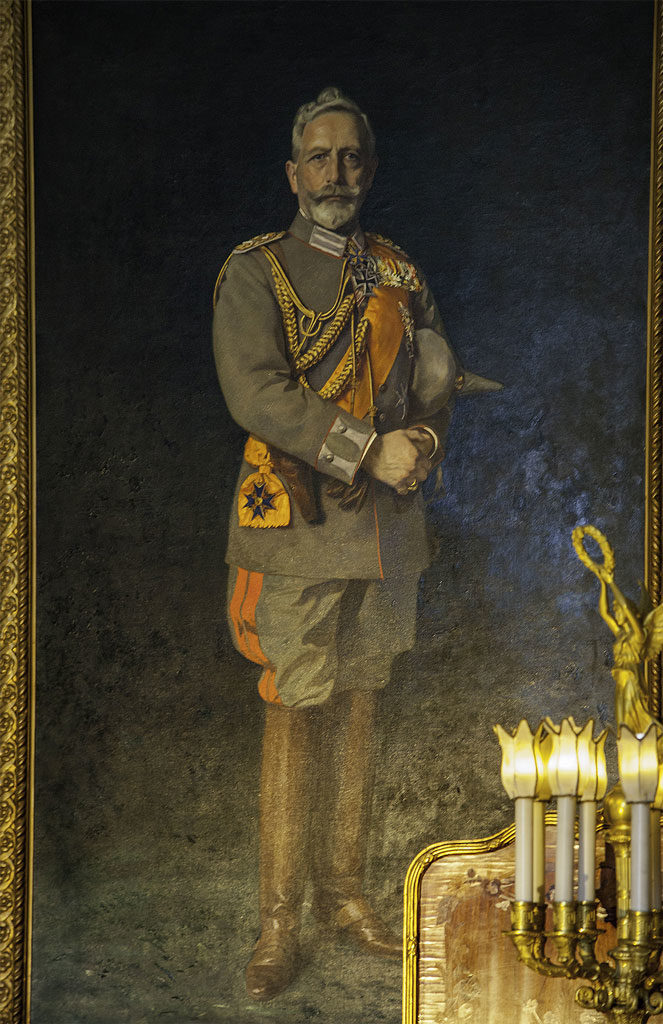 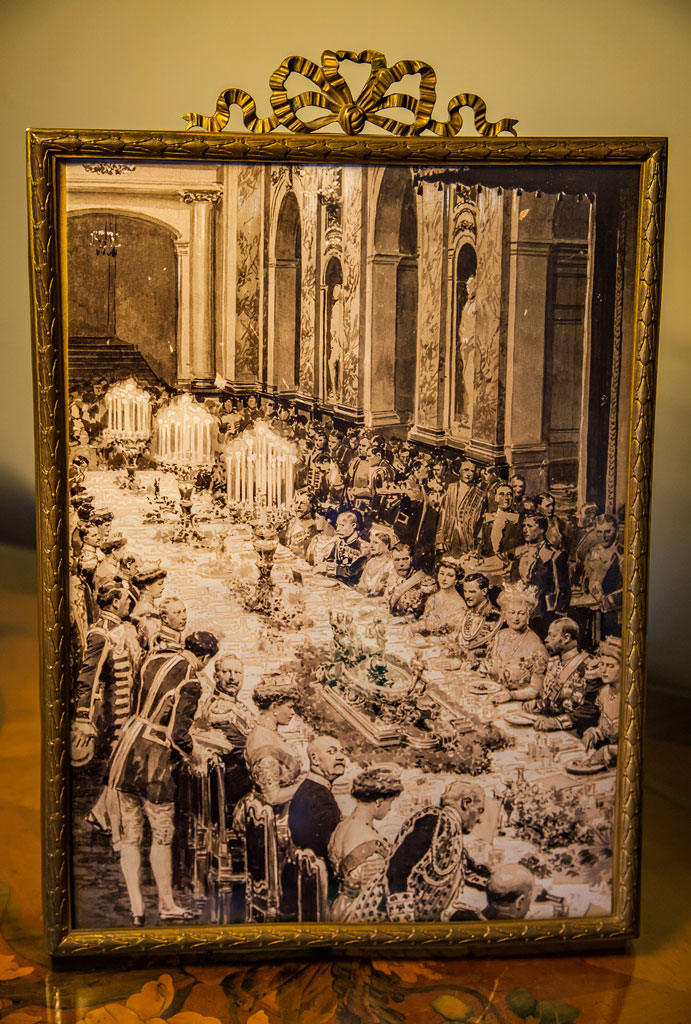 The small graphic on display in Huis Doorn depicts European royalty, including Britain’s King George V and Czar Nicolas II of Russia at a banquet hosted by Kaiser Wilhelm II (talking to the footman left) and his wife Dona, probably still in Germany prior to the First World War.

When his beloved Dona died in 1921, Wilhelm could escort her remains only to the German border after which she was interred in Potsdam.  He remarried shortly afterwards, with the somewhat younger Princess Hermine Reuss of Greiz.

During the Second World War the Nazis invaded the Netherlands and also stationed a guard at Huis Doorn.  (A recent movie with Christopher Plummer in the role of Wilhelm II hinted at a possible attempt to assassinate the Kaiser).  After the war, the Dutch government seized the house with all its contents and converted it into a museum. 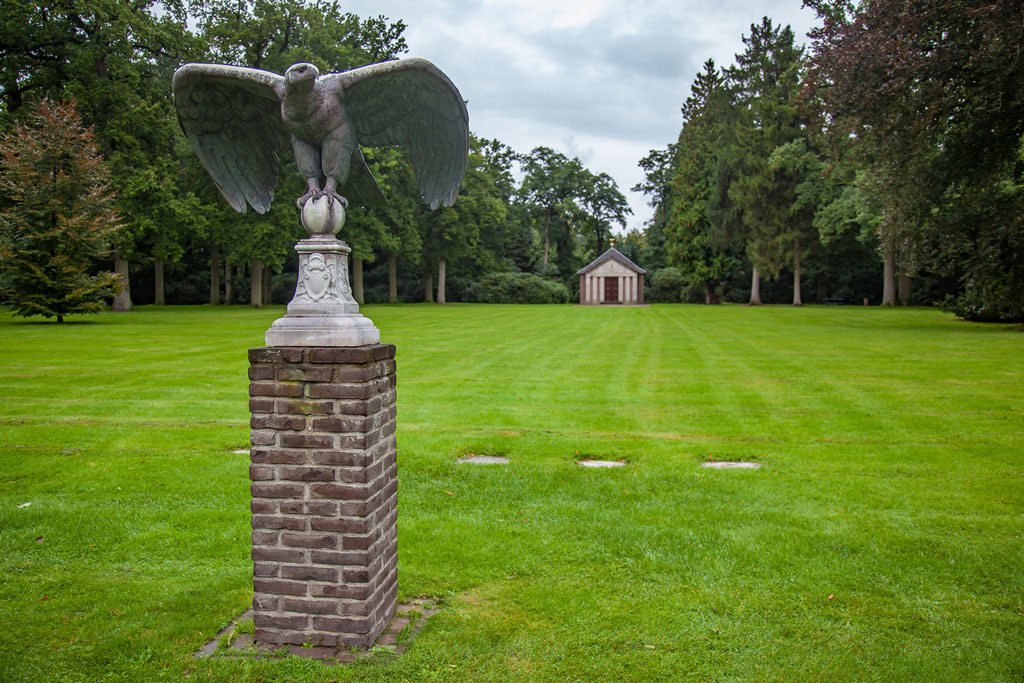 Wilhelm died in 1941 in Huis Doorn at the age of 82.  Despite his wishes, the Nazis displayed swastika flags at his funeral.  He was buried in a mausoleum near the house with the understanding that his remains would be returned to Germany once the Prussian monarchy got restored.  This, of course, never happened.

Huis Doorn previously belonged to the Dutch aristocrat Baroness Elbrig Willemin Henriette van Asbeck whose granddaughter was the famous actress Audrey Hepburn (My Fair Lady).  During the Second World War, Audrey and her family suffered famine and severe trauma in the Netherlands.

[This article was published on 11 November 2018 in slightly different format in the Afrikaans-language national Sunday newspaper, RAPPORT, in its travel section.  The headline translates:  ‘Small manor house for an outcast Kaiser’.] 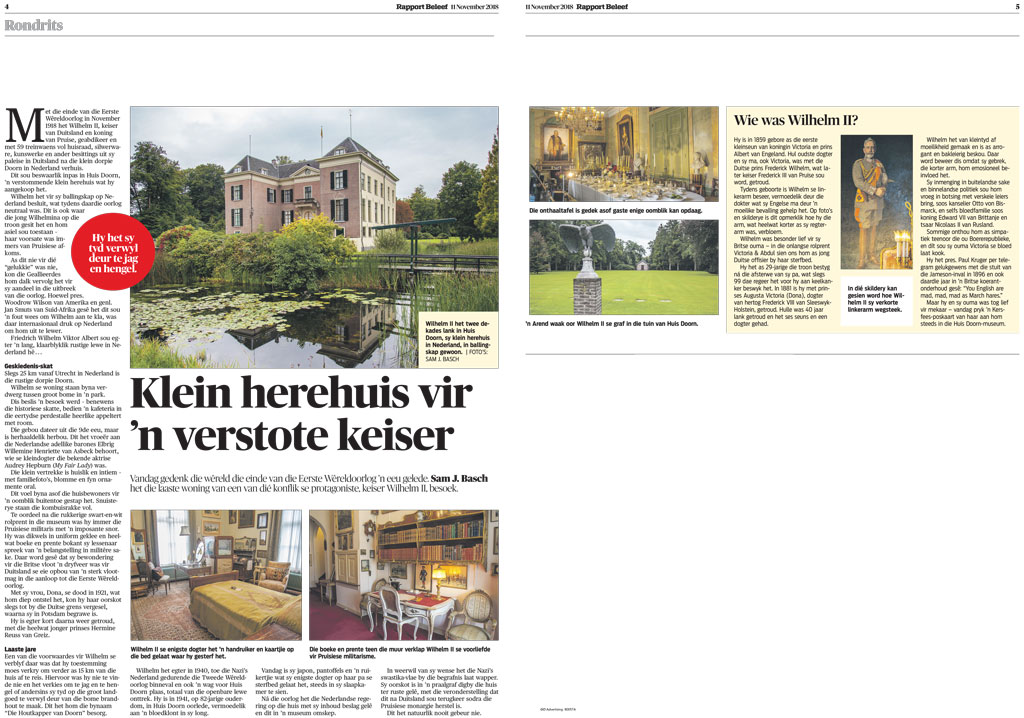